10 Trendy Bars To Scope Out in Mexico City

Mexico City is more than pyramids, tacos, and art. Don’t get us wrong. We love all of those aspects of the megatropolis known as DF, but there’s something else to be admired there: an excellent bar culture.

Perhaps the best part is that on the average traveler’s budget, the high-class allure of cocktails and happy hours comes at a reasonable price (most of the time). Another perk is the party starts in the afternoon and ends late, so both early risers and night owls can get in on the action.

The Mexico City area is divided into distinct neighborhoods, and some have more options than others, although hidden gems generate buzz every now and again. The most popular haunts find themselves in the trendier districts like the Condesa, Roma, Jaurez, Coyoacan, and el Centro. Whether you’re into beer (cervezas), wine (vino), or cocktails (traigos), you are sure to find something to wet your whistle while wandering the famous streets of Mexico City. 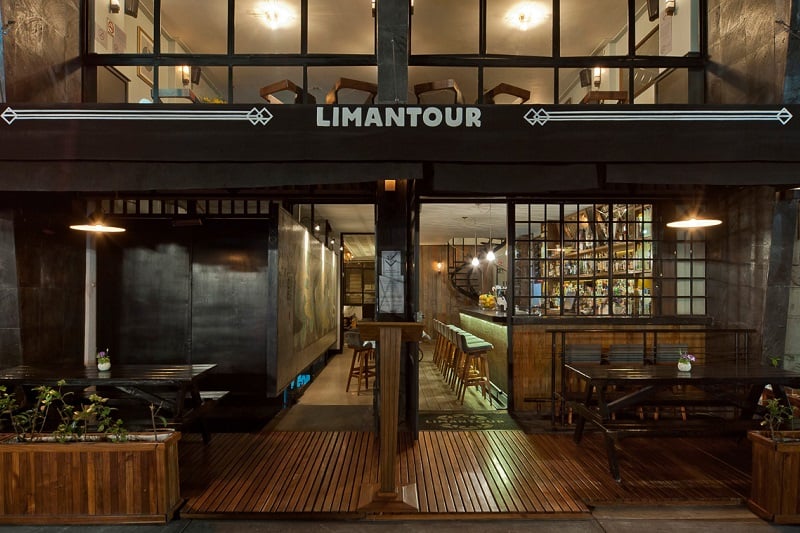 Limantour, located in Polanco, is the best choice for top-shelf liquor lovers. In fact, it was ranked as one of the best 50 bars in the world!

Polanco is known for its greenery, penthouse abodes, and high-class residents. Rubbing shoulders with the who’s who is a major perk when dropping by this neighborhood. In the heart of it all, Limantour caters to the lush who appreciates a little luxury at the same time.

Here, the cocktails are decidedly craft by definition. That’s because the bartenders are famously recognized throughout the city as well as in the industry. Some even have international awards and accolades.

If you want to nosh, Limantour has you covered with a select menu that includes tacos, burgers, and other snacks. Everything here celebrates glitz and glam, so you can rest assured the plates are artisanal in nature. In other words, this place is both fun and fancy.

It can get busy so reservations might make sense if you’re worried about missing out. On the plus side, most frequenters needing to order in English have no problem getting their point across. Some other options on the list will require just a bit of Spanish, but remember this: “por favor” and “gracias” go a long way! 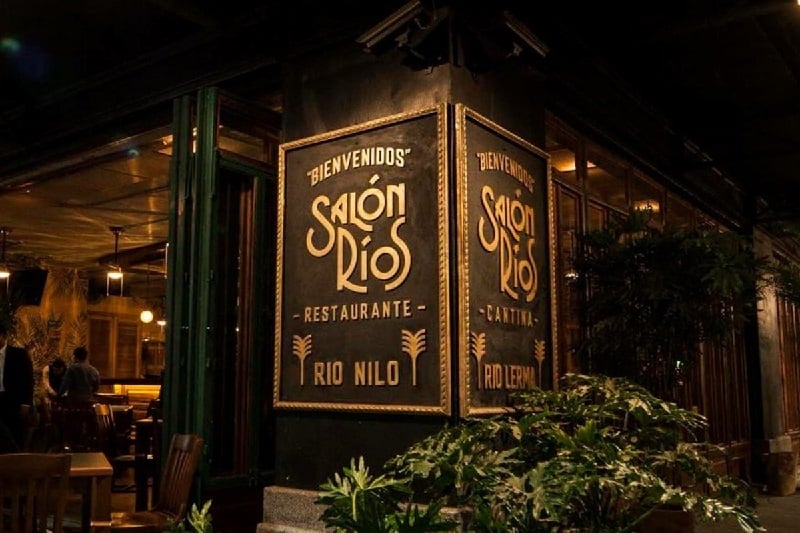 Nestled into the fast-paced neighborhood known as Colonia Cuauhtémoc, Salón Ríos offers patrons an experience that’s often described as airy and easygoing. In fact, it’s the lofty design, large plants, and funky adornments that usher in the masses.

The bar follows the rules of catina culture. This means the drinks are served straight (derecho), and the mixers are placed on the table for the guest to concoct themselves. It’s the best way to let the customer take the reins, offering full control and the ability to savor the liquor the way the universe intended.

You might spy some bigshots while hanging out at Salón Ríos. Office workers, families, and lunch dates are commonplace, but that doesn’t mean the locale is run of the mill. Ordering food while you lounge is highly recommended. Hint: Order the tacos de canasta.

Although they’re open fairly late, this option really fits the bill for a lunch stop or post-work drinks (at least that’s what Condé Nast reports). 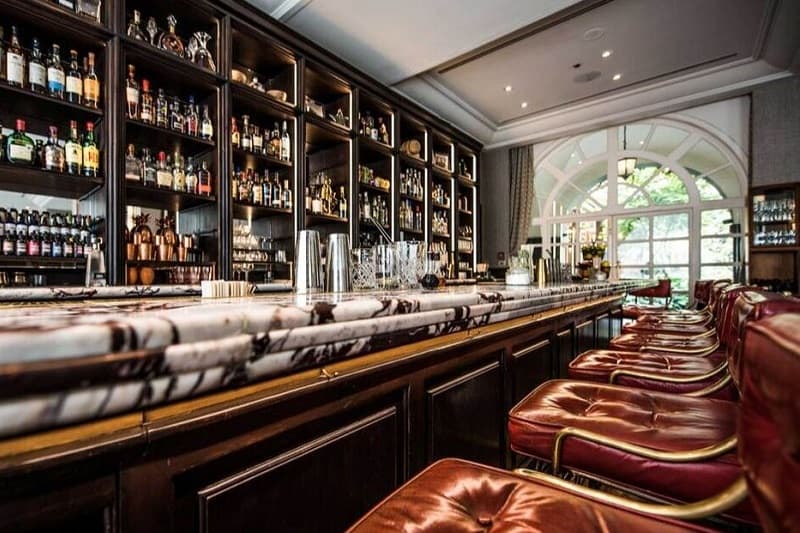 Not everybody wants to stay at the Four Seasons, but everybody enjoys a good drink there! That’s what Fifty Mils, located at the hotel, is all about. A quick visit offers just a taste of the glamour Mexico City has to offer.

There’s always a good mix as the bar refers to itself as eclectic and unpretentious. Even better, the haunt is a hit with both international travelers and locals, so you’re sure to find somebody who’s willing to spark up a conversation, even if you head in solo. At Fifty Mils, the name of the game is authenticity.

One of the appeals of Mexico is that its natural resources are rich, and the mixologists in charge of the menu here understand that fact. For this reason, traigos often contain locally sourced mixers, herbs, and flavors.

Are you interested in bringing this bar to you? That’s an option! They can set up shop at private events. One of the best perks of Fifty Mils is its wide-open schedule. They boast service 365 days a year, open from 12 pm to 1 am. 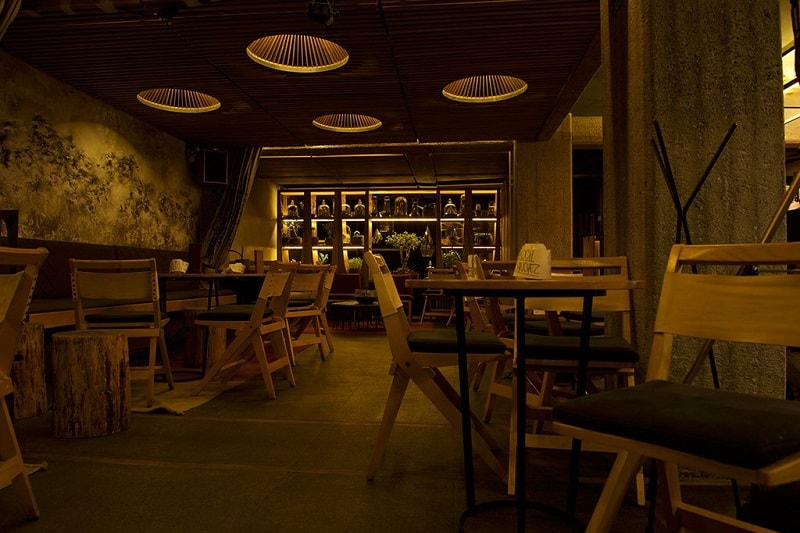 If you have a green thumb or appreciate nature’s beauty, you’re going to adore Xaman (centrally located in the barrio known as Juarez). The bar drives a new plant-based concept that chilangos have been enjoying for ages.

The all-natural theme carries into something a little more special, the prehistoric roots that make Mexico City what it is today. It’s a hybrid experience, blending the flavors of prehistoric America with hospitality inspired by Europe.

It might be a little hard to find this Zona Rosa-centric location as it’s technically a speakeasy. Frequenters recommend looking for a group hanging outside near the address to figure out how to get inside. Head downstairs through the unmarked doors to discover the bar.

Once you’re inside, however, you’ll feel right at home. The music is chill, so get ready to sit back, relax, and enjoy the ride. 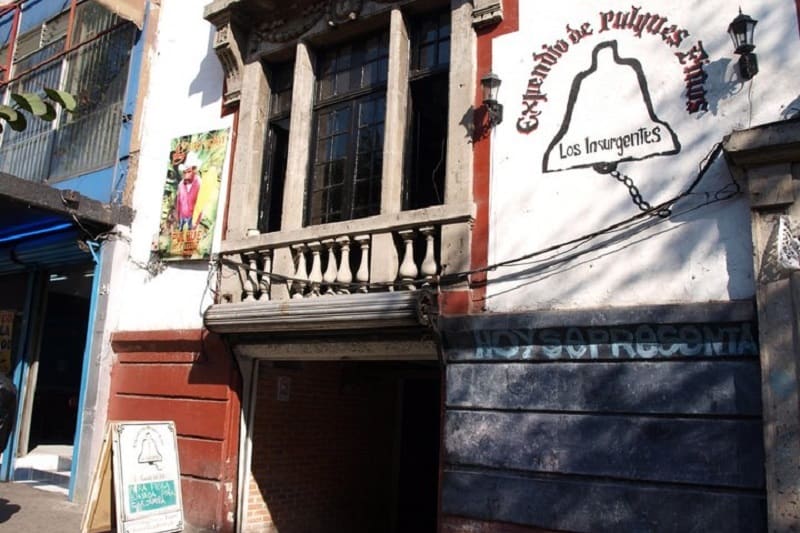 First things first. You have to know what pulque is if you’re going to try La Pulquería Insurgentes. Pulque is a type of drink made from the fermented sap of mague (agave). This is the same plant that brings us mezcal (and tequila). It’s usually milky, a little thick, and slightly sour. It’s not everybody’s cup of tea, but it’s certainly worth a try.

It might just take some getting used to. It’s a tradition that is thousands of years old (Mesoamerican period), originally derived for religious reasons. When the Spanish entered Mexico, they brought it to the masses as a secular beverage.

It did fall out of fashion, but tourists and historians alike have brought it back, and we’re here for it. To enjoy it, visit La Pulquería Insurgentes. The vibe here is casual and live music is usually on the menu; trying something new never sounded so good. 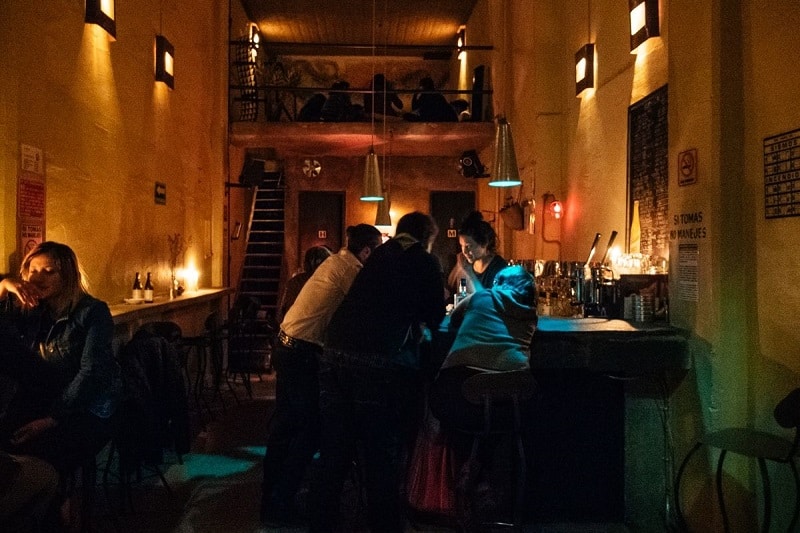 Here’s an insider tip: Many people call Mexico City CDMX. In Spanish, that’s pronounced something like say-day-em-eh-ek-quise (but rápido). Another inside tip? Stop by Bósforo in the evening to kick back with a mezcal and quesadillas with chapulines (crickets).

The building itself is a diamond in the rough, but behind the thick curtains that hide the joint, a candle-lit and romantic scene awaits, complete with fruits strewn about the counter. Mezcal will be served with fruit and chili powder. They may offer a complimentary side of nuts if you’re interested in rounding out the palate.

If you really want to kick it up a notch, claim your territory in the exclusive elevated loft area found in the rear. Like royalty sitting above the rest, you’ll have the best seat in the house.

7. All of Plaza Garibaldi 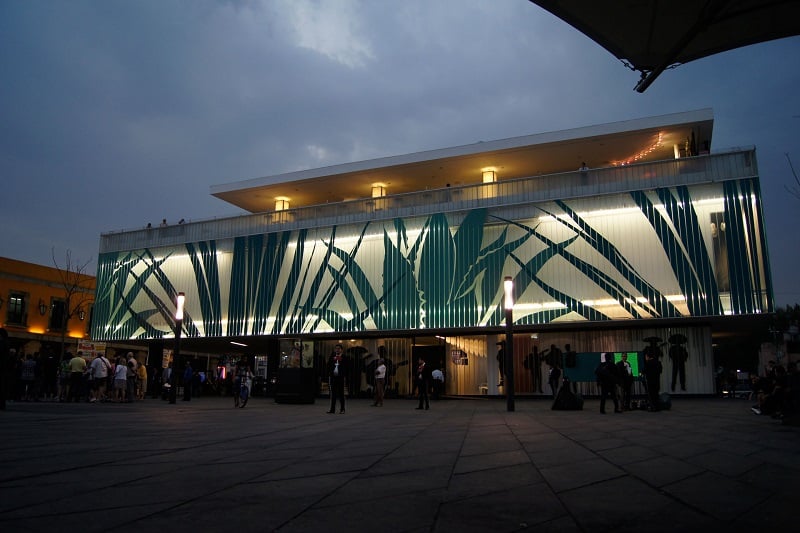 When your friends ask if you went to any museums while you were in Mexico City, you can respond in the affirmative if you stop by El Museo del Tequila y el Mezcal (MUTEM). Of course, around here we always throw in a museum recommendation, and this list is no exception.

This museum in question calls Plaza Garibaldi home. This area, near el Centro, is popular for its cantinas, mariachi schools, and the best Friday night fiesta in town. The museum is anything but stuffy. In fact, your ticket includes a tequila tasting. The experience walks visitors through an interactive and colorful exhibit that explains the history of agave in Mexico.

After a little educational entertainment, the restaurant bar is open. Stock up on tequila, mezcal, and treats. The museum highly values patriotism and Mexican heritage, so you’re bound to learn a thing or two in the grand Mexican tradition of sipping on mezcal without a care in the world. After your visit, take a tour of the neighborhood. Drop by any cantina that’s calling you in.

On Sundays, a giant flea market called la lagunilla gives you a reason to spend the day in the neighborhood. There, you’ll find retro gear, trinkets, and the world’s best micheladas. The sights and sounds of Plaza Garibaldi are sure to enchant. It might end up being your favorite spot in town. 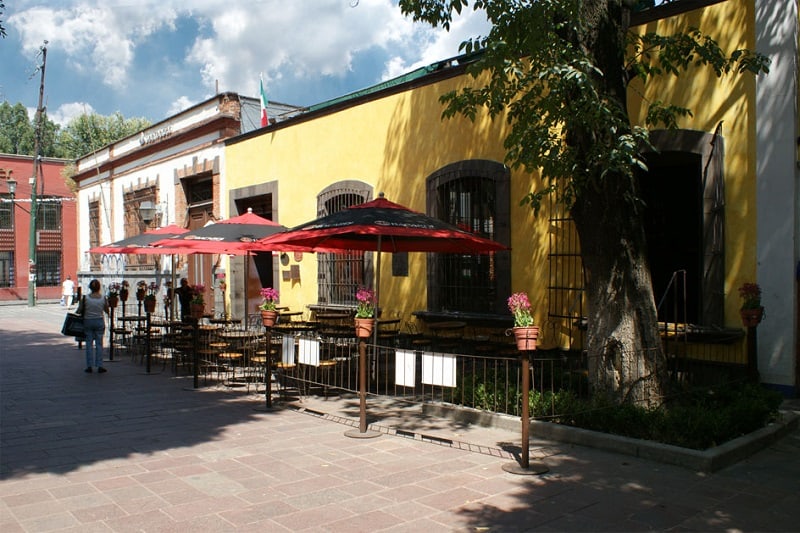 El Hijo is truly iconic in Coyoacán, the neighborhood Frida Kahlo and Diego Rivera once called home. Here, the music is rocking, so be prepared to sing, scream, and shout.

Locals call this place “classic,” and it’s clear why they feel that way. For generations, the rock and roll style has made the name famous throughout DF. Locals recommend the sopes or some tacos de cochinita. In their eyes, El Hijo sets the standard for tasty Mexican fare.

Because of the spot’s rich history, it’s held in high esteem by many. Countless cultural and political conversations have been held over drinks here, throwing it back to the idea of the French salons of the Enlightenment.

The crowd is diverse: hippies, hipsters, rockers, artists, and average Joes shuffle about without fear. What other bar has both a Saturday night buzz and a reading club? 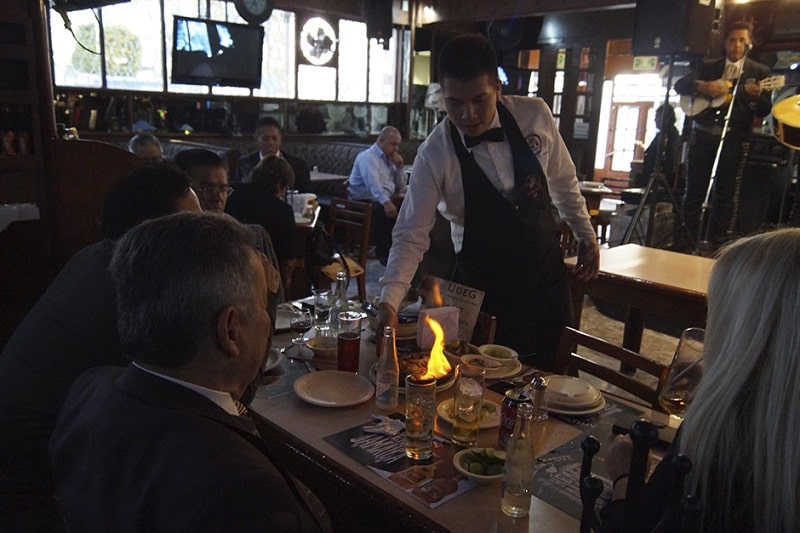 Another Cantina makes our list (and deservingly so). La Unica de Guerrero is an absolute gem. According to their website, La Unica de Guerrero was established in 1933 by Don Ramón Suárez Fernández. Years later, the menu is decent, the drinks flow, and yet, Yelp classified el Lugar as a dive bar.

There are two floors, one is a bit more family-oriented. The experience is one of a kind, either way, so don’t write the place off because it lacks a little glitz and glam. There’s often live music, and everybody around is in high spirits.

One note: whereas many Mexico City joints keep the party moving and grooving all night long, this one currently closes at 10 pm every day of the week. That means it’s good for dinner but won’t work so hot for el after. 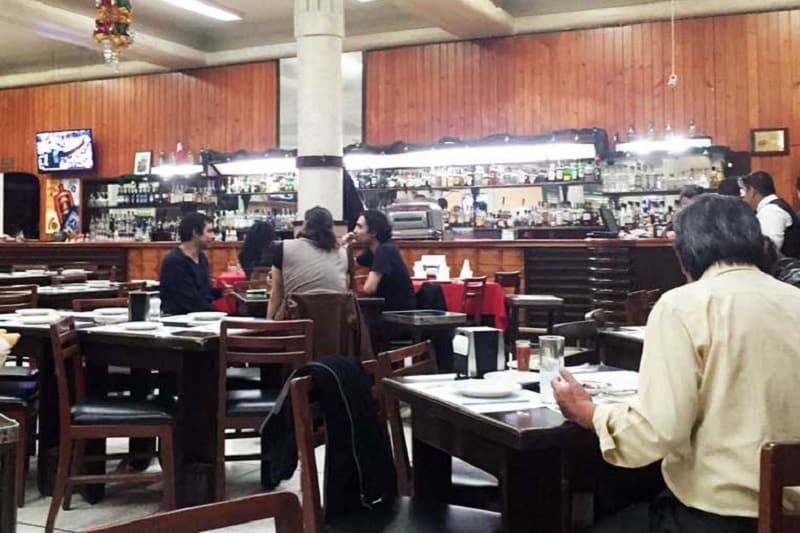 At the bar, when the server comes by, they might ask “una más” or “otra?” For us, the answer’s always yes! We’ve got one more option: Salón Covadonga. What stands out most here is the size of the place! It’s an old hall, filled to the brim with square tables.

The regulars roll in as usual. You’ll spot chain-smokers, seniors, happy hour enthusiasts, and foodies. Nowadays, though, plenty of young people filter through as well, hoping to get a taste of the amusement of yesteryear.

Before heading out on the town (recommended: Patrick Miller), many stop by for dinner and a drink or two. The bar is fully stocked, but most visitors keep it simple. Try rum and coke. Order it capichano (instead of all coke, they add mineral water, too). It’s sweet and light – the perfect way to start the party.

What’s on the menu? Spanish cuisine makes an appearance here. From Jamon Serrano to a Spanish tortilla, everybody finds their fill one way or another.

When it comes to finding the right bar in Mexico City, our list simply serves as an introduction. Old classics like Salón Covadonga compete with the new, meaning that every excursion will provide a new adventure. Salud!

The post 10 Trendy Bars To Scope Out in Mexico City appeared first on Next Luxury.