by admin August 5, 2020
New York City’s theater industry remains closed because of COVID-19, but many theater workers are finding ways to earn money. Some Broadway performers now offer dance or musical training online. Other workers design jewelry or make toys. Still others sell skincare products. These occupations may not command pay equal to that of their old theater jobs. But Broadway’s many now-unemployed workers say any earnings are helpful. The costume maker Amy Micallef is among them. Normally,  she makes costumes, the clothing worn by actors in plays. She has worked on major Broadway productions including Hamilton and Frozen. Currently, her skills are being put to another use: toy making. But Micallef’s creations are designed more for adult use than child play. Her soft, round toys are made to look like the new coronavirus. Each one sells for $23 at the online store Etsy. Micallef invites buyers to use the little corona balls when they feel angry, worried, or troubled.  “Sometimes you need to throw something against the wall, you need to step on something. Do you want to run that thing over with your car? Honey, be my guest,” she said.   The choreographer Ali Solomon might like having a toy corona ball herself. Until recently, she worked as a choreographer, a person who creates dances. Solomon’s career in musicals was going strong when the coronavirus health crisis hit hard in mid-March. Like many in the industry, she was working on several productions at once, including Trevor: The Musical and Charlie and the Chocolate Factory. But suddenly all the projects came to a halt. “You’re at the top of your game after working for so many years and now to go find a job in another industry, where do you start?” she said, adding, “You’re lucky if you’ll make minimum wage.” Right now, Solomon is working as a salesperson for skin care business Rodan and Fields. She also teaches dance in-person and online. “I’m starting to add little bits of income,” she said. “None of it will compare to what I was making before. But it’s something and luckily I’ve been able to save.” Solomon added that she fears those savings will shrink fast because of the high cost of living in New York City. The actor “Actors’ normal side gigs are catering and even those jobs don’t exist,” said Jeanna de Waal, the lead actor in the upcoming musical, Diana. De Waal has gone from acting to operating an online business she created in 2017 with her sister, Dani. At first, the company, called Broadway Weekends, offered in-person theater camps for adults. After the shutdown, she moved the training camps online. She began adding people she knew from the theater business as teachers. “All my friends were unemployed. So, it was very easy to ask around,” she said. Broadway Weekends now offers up to 30 classes a week on the Zoom internet conferencing site. De Waal says Broadway Weekends now has more than 7,000 students registered. She is working to establish a non-profit version and an educational division for school children. The producer Broadway producers have donated millions of dollars into emergency aid collections for theater workers. But one producer is using her money to pay dancers to lead her online exercise and dance training program. Jenna Segal has produced shows including Hadestown and What the Constitution Means to Me. After the New York theater’s closed, she launched Get In Shape Grrl! on Facebook. The project has since expanded and now has about 15,000 members. The cost of membership? Zero dollars. “I just thought to myself, ‘Wouldn’t it be fun to bring Broadway to people who are sad because the season was just about to open? Let’s do something where they can participate and we can keep dancers employed,’” said Segal. A union leader’s worries… Adam Krauthamer is president of the Associated Musicians of Greater New York, the largest local union of professional musicians in the world. Kauthamer says the entire arts world is facing the biggest threat to its existence ever. He added that many of his union’s 7,000 members may not return to Broadway theaters and other performance spaces. He worries that the sound of New York may soon be very different without help. “If the right politicians and philanthropists and people who help the arts ... do not act to put together a program that will save culture and the arts in New York City, it’s going to change as we know it forever.” The situation is sure to worsen following the end last month of the U.S. government’s $600-a-week pandemic unemployment aid program. New York theaters do not plan to reopen until at least January. …but the costumer expresses hope Yet Amy Micallef, the costumer-turned-toy maker, trusts in a brighter future. She says she knows two very important things that many others may not believe. “This will end. It will. I promise it will," she said. "And second, there is good on the other side.” I’m Caty Weaver.         The Associated Press reported this story. Caty Weaver adapted it VOA Learning English. George Grow was the editor. ___________________________________________________________   Words in This Story   toy – n. a plaything, usually for children guest – n. a person who is invited to a place or an event ​ minimum – adj. least or lowest possible in amount or degree income – n. money that is earned from work, investments, business, etc.​ gig – n. a job for a musician, an actor, etc.​ cater – v. to provide food and drinks at a party, meeting, etc., especially as a job​ participate – v. to be involved with others in doing something : to take part in an activity or event with others​ philanthropist – n. a wealthy person who gives money and time to help make life better for other people​ We want to hear from you. Write to us in the Comments section, and visit our Facebook page. 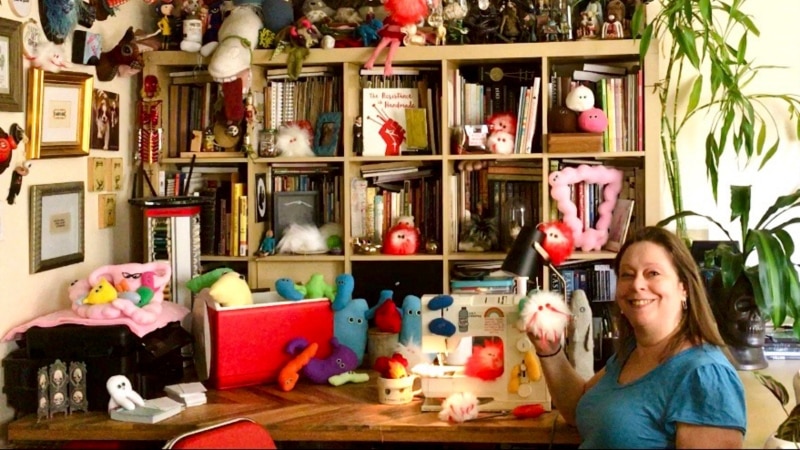