Can Boris Johnson’s ‘Bustle Hustle’ Get Britain Through A Downturn? 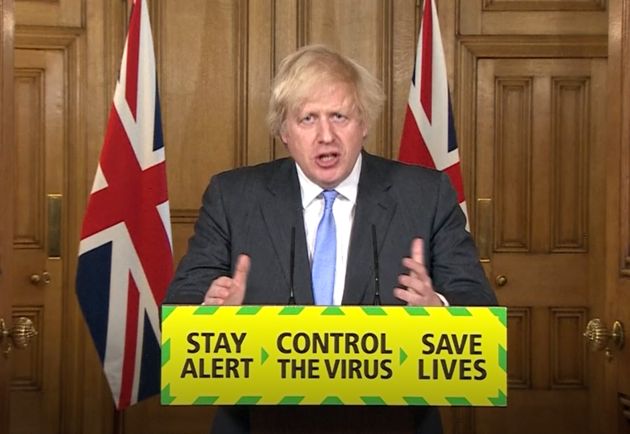 You’re reading The Waugh Zone, our daily politics briefing. Sign up now to get it by email in the evening.

An optimist thinks the glass is half full, a pessimist thinks it’s half empty. A realist just drinks the bloody pint. Well, from July 4, that old joke will be stress tested in spades as pubs in England join restaurants, hotels and a string of other venues shuttered during the past three months.‌

As Boris Johnson announced the biggest and most dramatic steps in his ‘unlockdown’ plan on Tuesday, he tried hard to caveat and contain his own natural sunny disposition. In the House of Commons and in his No.10 press conference, he was torn between ebullience and caution. But in the end (spoiler alert) the optimism won out.

You always know which bits of a Boris Johnson speech really matter to him because he literally taps his notes or bangs the Commons despatch box to prove it. Having waxed lyrical about the end of our “long national hibernation”, his personal Morse Code became its most animated. “Life [tap] is returning, to our streets [tap], to our shops [tap, tap], the bustle [tap, tap, tap] is starting to come back!”

He was quick to then warn in the next breath that the “frost” could too easily return, but stressed he trusted in the common sense and community spirit of the British public to understand the nuances of the latest relaxation of the rules. He wasn’t exactly saying he would blame the people if things went wrong, but like a fairground hustler he made clear he was taking a gamble and it would be a shared risk.

That tension was again on display in the press conference. The PM said “frankly I can’t wait to go to a pub or a restaurant even if it may not be wholly compatible with the new diet that I’m on”. He outlined his own wishlist of visiting the Globe Theatre, going to a restaurant, having a haircut and playing a game of village cricket. He said “people need to enjoy themselves...I want to see bustle [that word again], I want to see activity..” before remembering to add “I also want everybody to be careful…”

And similarly when asked about July 4 - dubbed ‘Super Saturday’ by some government-supporting tabloids - he couldn’t resist saying: “I hope it will be a great day.” But he then remembered the script: “People have to make sure they don’t over do it. We can’t have great writhing scenes in the beer gardens.” An expert writher himself, his jocular tone didn’t sound too wholehearted a condemnation.

The contrast in tone with chief medical officer Chris Whitty (and to a lesser extent chief scientist Patrick Vallance) was pretty marked, despite the PM’s objections to the contrary. In possibly their final Three Amigos press conference, the Covid curve sombrero was indeed looking squashed, but the unease was palpable.

Whitty made plain his job was just to advise, not to decide, but he repeatedly stressed the hibernation could well return. “If people hear a distorted version of what’s been said that say this is all fine now, it’s gone away...then we will get an uptick, for sure.” He would be surprised if we weren’t still dealing with the pandemic next spring. Unlike the PM, he even allowed himself the luxury of saying hindsight may prove today’s relaxations were unwise.

It’s precisely because Whitty was trying his best to be supportive of the PM that some of his warnings carried more clout. When he said his biggest worry was people not reporting their symptoms or engaging properly with NHS Test and Trace, it was a reminder how fragile the progress has been so far.

One of the main lessons of the Chilcot inquiry into the Iraq war was don’t get into a war unless you have an exit strategy for getting out. Johnson didn’t have the luxury of avoiding this fight, but some critics think he has not yet properly planned the way back through any big job losses. Having bought time with his successful furlough plan, has Rishi Sunak been doing enough to draft a mass reskilling programme for those who will lose their jobs?

The PM’s ‘apprenticeship guarantee’ is a big start, but it’s going to take serious planning to start retraining the unemployed in growing areas like climate change, social care, AI (maybe through a ‘Right To Train and Retrain’ as some Labour city mayors have already suggested). Theatres, music and the hospitality sector may all need targeted subsidy for continue furlough until social distancing can fully end.

Johnson hinted at the end of his press conference that one-to-one tuition for some school pupils could become the norm, not just a catch-up, to reduce inequality. But he needs to build a detailed, funded programme to do that. If he could pull that off, as well as reskill a whole swath of workers, his ‘levellling up’ talk could prove more real than rhetorical. It would also give the country some kind of enduring legacy out of this awful crisis. The end of the daily press conferences doesn’t mean these questions will stop.‌

If the PM wants to foil the cynics who say he’s relying on public amnesia about the crisis to get himself out of a political hole, he could also perhaps start talking more about how he will personally never forget his own illness nor the deaths of others.‌

Back in March, Johnson talked about the need for a “wartime government”, about “the fight” against the new “enemy”. So why doesn’t he promise a national memorial or garden of remembrance for all those who have died? Maybe, given more Britons have died from Covid than the 40,000 civilians who perished in the Blitz, every single one of their names could be etched in stone?

Pessimists may always see the easing of lockdown as an act of blind optimism at best and a reckless political hustle at worst. But if Johnson can actually now draft a serious economic, educational and social plan for recovery, while never forgetting those who have died, he could turn out to be the kind of realist the country needs.

Quote Of The Day

“We may, at some point, say that particular bit of the decisions that were taken is too much of a risk, with the benefit of hindsight and have to go back on it.”

Boris Johnson announced the 2m social distance rule would be supplemented by a ‘1m plus’ rule. Two households will be able to meet and stay over at each others homes indoors. A raft of premises will reopen on July 4, with even those not opened yet promised some relief in coming weeks.‌

A rebellion by Tory MPs ensured a defeat for Jacob Rees-Mogg’s plan to allow MPs to debate serious bullying and harassment complaints made against them by staff. MPs stood up for their researchers and others and backed Chris Bryant’s amendment by 243 to 238.

Justice secretary Robert Buckland announced that juries could be scrapped in some trials in order to tackle a backlog of court cases topping 500,000 while adhering to social-distancing measures.

Priti Patel announced that the government was accepting in full all the recommendations of the Williams review into the Windrush scandal. She also admitted compensation for victims had been “far too slow”.‌

New ONS data showed that ‘excess deaths’ are decreasing. Deaths in hospital are now below normal levels, but deaths at home – more than 900 excess deaths in the week ending 12 June – are still higher than usual. There was a 30% fall in emergency admissions to hospital in May compared to the previous year.

Why Reopening Isn’t Enough To Save The US Economy - NPR

Each week, the HuffPost UK Politics team unpack the biggest stories from Westminster and beyond. Search for Commons People wherever you listen to podcasts and subscribe.