Cheers, Ted Lasso, for getting the UK basically right 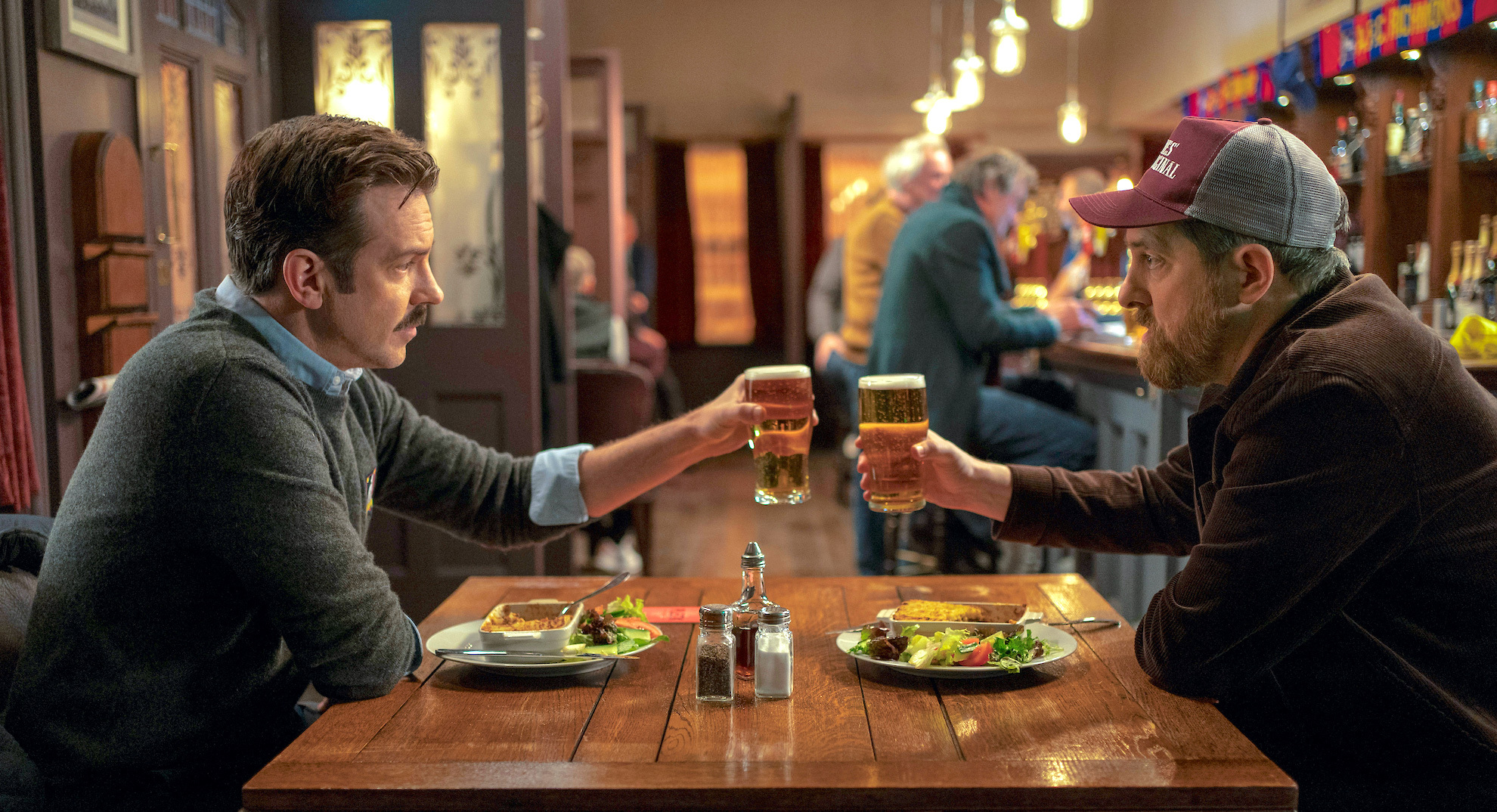 There's a scene at the start of Season 1 of Ted Lasso (which just returned for an equally triumphant Season 2) where my wife and I, Brits who watch more than our share of American sitcoms, started to get a sinking feeling of déjà vu.

It's the scene where Ted (Jason Sudeikis), an American football coach newly imported to manage the fictional UK club AFC Richmond, faces a hostile British press for the first time. Ted promises to do his best for the team, "win or lose." An angry reporter shouts back: "Or tie." Ted, flustered and jet-lagged, suddenly recalls that yes, there are ties in soccer for some strange reason.

Reader, I groaned out loud. Or tie? No Brit would ever say that. We all know the phrase, which arrives alongside the rules of football in our mothers' milk, is win, lose or draw. In a show that had set out its stall — it was going to correct Ted's every Americanism — this was an odd clanging note. Introducing Ted to the word draw could have added to his klutzy comedy style ("like Quick Draw McGraw, right? Y'all get that cartoon horse over here?") while establishing authenticity.

Was this an early sign that this American production would repeat past mistakes of U.S. sitcoms that preferred to push a stereotyped fantasy version of the UK that's really only funny to Americans? (Looking at you, London-set, tired British caricature-filled Season 5 opener of the otherwise perfect Parks and Rec.) Thankfully, it was not.

The "tie" clanger aside, Lasso came out of the gate having plenty of fun with real differences in our common language (a subject I'm obsessed with) and the esoteric nature of my truly weird homeland. "How many countries are in this country?" asks an exasperated Ted on learning one player is from Wales. "Four," reply his coaching team, deadpan. "Kind of like America these days," Ted muses. Educational, political, and hilarious: a rare combination in entertainment.

This pattern was to continue throughout the increasingly affecting Season 1. Every episode had a moment that was slightly off, often when it was trying to be the most on it about U.S.-UK differences. Take Ted bringing club owner Rebecca a sweet treat that he is careful to call "biscuits" rather than cookies. This linguistic awareness is played as a point in his favor. Except that the treat itself, the buttery Scottish delicacy known as shortbread, is kind of its own thing; Brits don't usually lump it under the generic "biscuit" category. More often, with guests, we would specify: Fancy some shortbread, love? (Technically, it's a hybrid that dates back to medieval "biscuit bread.")

But that's okay, American showrunners! This is very advanced UK residency stuff, you weren't to know, and we're pleased you made the effort. Speaking of effort, I was pleased to see that Season 2 makes a big deal out of AFC Richmond enduring a streak of "draws" — which makes me think that the showrunners are trying to make up for the "tie" howler by making the correct word central to the plot, which would be a very Ted-like thing to do.

Like skeptical journalist Trent Crimm of the Independent (an odd choice itself, since we're told his paper shares an owner with The Sun, which The Independent absolutely and pointedly does not, but never mind), my wife and I find ourselves increasingly charmed by the zany American that is the soul of decency. By which I mean the show as well as the character. Its ensemble, most of whom cut their teeth in British sitcoms, helped flesh out what were essentially caricatures at the start (such as Keely, the tabloid-friendly WAG parody played by Juno Temple, who turned her into an empowered moral center for the show).

The showrunners, like Ted, were smart enough to spot talent in their ranks — sending Brett Goldstein, originally hired as a writer, out on the pitch to embody everyone's favorite football curmudgeon, Roy Kent.

For all the fish out of water stuff, Ted Lasso works so well because it's mostly about the lack of transatlantic differences. Aside from a handful of Brit-specific or soccer-specific references per episode, its scripts could be about any naively optimistic coach in any sport in any country. Instead of focusing on what makes the UK different, as in every American sitcom to feature Brits since Friends brought us Ross and Emily (even the amazing Arrested Development's "Wee Britain" episodes, a parody of how British characters are seen, never went beyond that parody), Ted Lasso points viewers at our common humanity.

Because of course it's not just Brits. We all have our cultural defenses, our stiff upper lips that hide our trauma. And they can always melt away, even in the coolest climate, when someone consistently believes in the best versions of us.

Adhering to this credo while still poking gentle fun basically puts Ted Lasso in another fantasy version of Britain, but a homegrown one: The Richard Curtis cinematic universe of Four Weddings and a Funeral, Notting Hill and Love Actually. (Season 2 acknowledges this debt with several very direct homages to the Curtis-verse.)

In Ted Lasso's Curtis-esque view of British football culture, there are no real hooligans. There will be no equivalent of the invasion of Wembley by drunk ticketless male fans during the England-Italy Euro 2020 final, or the racist abuse hurled at England's Black players, because the show cannot redeem disgraceful behavior on that societal scale in a neat 30 minutes. (Sudeikis personally was vocal in his support for the players.)

Likewise, there's no room in Tedworld for the downsides of the UK's toxic alcohol culture. None of the background characters are drinking 10 pints, fighting outside a pub, then vomiting in a queue for the kebab van.

Maybe that's just as well. If Ted Lasso is a show about bringing out the better side of people through decency and belief, maybe it can do the same for the UK. The showrunners clearly believe in what Brits can be more than we believe it ourselves, especially in our current fractured, post-Brexit, overly COVID-ridden nightmare.

They see the best of us in our darkest hour. There's one Season 2 episode with a political stance reminiscent of the England team's (surprisingly controversial) insistence on taking a knee against racism before matches, led by a player whose bravery reminds us of Marcus Rashford and his good fight against the UK government over child hunger.

But it also wouldn't be Ted Lasso if it didn't have the occasional howler that misunderstands the UK — and the biggest, unfortunately, occurs right at the start of Season 2.

What happens next is ... not good. Credit: apple

In the opening minutes of Season 2 episode 1 — spoiler alert and trigger warning — Ted Lasso kills a dog. The canine in question is Earl Greyhound, the dog mascot of AFC Richmond. Earl Greyhound is sitting on the sidelines like a good boy when he leaps across goal line at a pigeon just as Dani Rojas (Cristo Fernandez) is taking a crucial penalty. You can guess the manner of death.

The wrongness of this moment boggles the British mind. One of the things we feel identifies us as a nation, rightly or wrongly, is our outsized love and care for animals. Not to mention our somewhat officious obsession with health and safety. Sure, you might see a clueless bloke with a dog standing on the sidelines behind goal ... in a pub league game. Never in a championship league match in a stadium the size of AFC Richmond's.

Especially not when Season 1 showed us Earl Greyhound as a regular mascot, a guy in a furry suit. British teams, like American ones, have plenty of those. Where did the poor doomed dog come from? Is this supposed to be a reference to the baseball pitcher who accidentally killed a dove? It's never explained.

Sure, the moment is played for laughs and is used to set in motion the plot — to wit, Rojas' case of the yips. But we Brits don't joke about such things. If a football match ever killed an actual dog, fans would riot. The RSPCA (Royal Society for the Prevention of Cruelty to Animals, which is a full 40 years older than the ASPCA) would likely file charges. It would dominate newspaper headlines for days and prompt a government investigation. Ted and Rebecca would be forced into resignation at worst, and never hear the end of it at best.

Oh yeah, and in such a horrific and unlikely event, a football referee would be required by the rules of the game to stop play. Assuming the pitch were not immediately invaded, Rojas or a teammate would retake the penalty — not simply end the game in a draw.

But hey, at least they call it a draw, so that's progress. And without fear of spoiling the other seven episodes that the Trent Crimms of the world were provided with in advance, there is no more dog killing; Ted Lasso remains pretty much the same animal we saw in Season 1. Decent, uplifting, soul-soothing, occasionally getting its adopted homeland wrong, but way more often getting its essential humanity basically, lovingly, hopefully right.