Eric Leif Peters: #CommunityCollegeBecause ... learning is what everybody will be doing in the 21st Century

My name is Eric Leif Peters (which is an anagram of "fertile recipes" and "fierce reptiles", so my friends know me as the “Culinary Herpetologist”). I attended CCAC at the Dawn of Time, when dinosaurs walked the Earth (Fall 1977-May 1979). I may have earned an Associate Degree, but I honestly don't remember. I DO know that my credits (at least for the courses I passed) all successfully transferred to the University of Pittsburgh (from which I earned my B.S. in Biology in the Fall 1982 semester). I then went on to earn a M.S. in Zoology at the University of Georgia in 1986, and a Ph.D. in Radioecology, with certification in Ecology by the Program for Ecological Studies in 1993. After that, I worked as a Technical Advisor for the International Atomic Energy Agency, taught at Taras Shevchenko University in Kyiv, Ukraine, and was an Assistant Research Ecologist at the University of Georgia’s Savannah River Ecology Laboratory (SREL) on the U.S. Department of Energy’s Savannah River Site in South Carolina. In 1996, I was hired as an assistant professor of Ecology and Environmental Science at Chicago State University, retiring as a full professor in 2016. Last January, I began a Visiting Professorship in Biology at Governors State University. 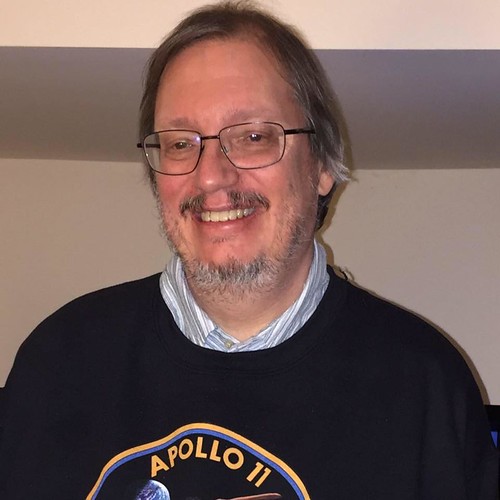 How did you choose your major? What motivated you to choose that field/profession?
I really had no choice. I was one of those kids who (sort of) got out of his bug and dinosaur phases, but then stalled in his reptile and amphibian phase. I worked as a Lab Assistant in the Section of Amphibians and Reptiles at the Carnegie Museum of Natural History from 1972 (when I was 13) until 1980 and have spent most of my life studying “herps” and fishes (often radioactive ones). I recognized when I was in high school, however, that museum curators needed to have a Ph.D., that there were very few museum jobs (which is certainly the case at the CMNH today), and that a career in herpetology would likely require at least a Master’s degree. 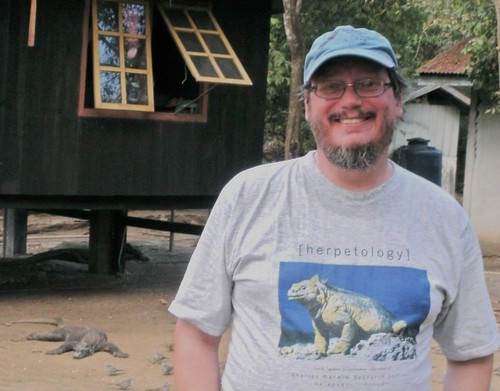 What did you enjoy about attending CCAC? Any memorable moment to share?
I enjoyed the small classes and compact schedule at CCAC. Several of my professors were really outstanding (I particularly remember microbiology with Dr. Maxon and cultural anthropology with Dr. Medonça). I also greatly enjoyed having access to racquetball courts for the time between classes (a woman who was a fellow biology major and I used to play for hours). I occasionally played with Franco Harris, who was a friend of the guy who supervised the place (back then, there was this thing called Three Rivers Stadium that was also on the North Side). I even beat Franco a few times (he had more stamina, but I could hit shots too low for him). There was also a coffee shop on campus that sold two donuts and a vase of coffee for $1.00. I doubt I could have made it through morning classes without it. Be sure to visit the National Aviary next to campus. It has a flock of Guam kingfishers, which were driven to extinction in the wild by invasive brown tree snakes.

How involved were you at CCAC? Did you study abroad? Did you have internships or Co-Ops? Clinicals and/or practicums? Were you a part of any clubs, sports, or extracurriculars?
Soon after attending CCAC, I became an emancipated minor, so I really had no spare time (and I was so broke that I couldn't afford to pay attention). I worked downtown at night and could catch the bus to campus in time for 8:00 AM classes. Most of my classes were between 8:00-12:00, with afternoon labs for biology and chemistry. I also had two work-study jobs on campus (the first delivering A-V equipment and later cleaning glassware in the Biology department). The latter was not very demanding, so I spent a lot of time improving my chess game with my supervisor. Lest you think that time was wasted, as a doctoral student I wrote a paper between chess games with one of my profs on the pattern of cell damage that is caused by cosmic rays.

Did any of these experiences lead you into realizing your passions for work and career?
I had a chance while a senior at Taylor Allderdice High School to teach the last two weeks of my Biology II class. I borrowed animal specimens from the museum, wrote the lectures (I even got to write some of the questions for the final), and in the process learned that I liked teaching. I would not have been financially able to attend a four-year college (even locally), however, if not for CCAC. I most likely would have ended my formal education after graduating from high school (as a couple of my fellow herp enthusiasts did). Fortunately, I was able to receive Pell grants and assistance from the State (which I’m sure is next to if not actually nothing these days). I did not accumulate any debt while attending CCAC, and was able to graduate from Pitt (three years and a semester later) without a huge amount of debt. 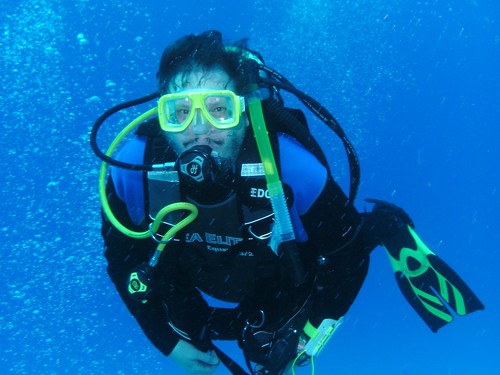 What (transferable) skills did you gain that you could take into a workplace?
At CCAC I learned how to program in BASIC. I earned a "D" in the course because in those days, you had to program using a terminal and count the characters in a line of code to edit a mistake (no video terminal). I wasn't then (and still am not) a patient person, so I stopped doing the homework. Several years later, I was in graduate school, and took a course in Ecological Modeling where I had to program. I bought an Apple ][e and believe it or not, I remembered nearly everything I needed to write the code for the models. Other courses in my Ph.D. program also required programming, and I have used computer modeling in several research projects. While working toward my Ph.D., I had a small but lucrative business programming software applications. I was using other languages by then, but the principles were the same as I learned in the CCAC BASIC course. Last spring, I taught a course in Plant Diversity (which I had never taught before). I recalled quite a bit of plant biology from Sister Judith Shea’s class, and that helped a lot.

What are you hoping to do next? What would you like to do professionally?
Well, I'm still sort of "retired", but I would like continue teaching, publishing some completed research, and perhaps write a textbook (which I'm told is a good way to make $1.00/hour for 10,000 hours’ work).

How do you manage stress (most especially during these uncertain times)?
I picked the wrong semester to unretire (LOL). To relieve stress, I shout at the TV and bake a lot (but, I was doing that before Covid-19).

What do you want prospective college students to know—what advice do you have for them?
Many young people today view higher education simply as part of an expected pathway to a well-paying job. It is demonstrably true that a college degree (both two-year and four-year) will lead to higher lifetime earnings. There is, however, an enormous difference between a "job" and a "profession". Most of the people I have known who have "jobs" hated their job and couldn't wait to retire. Most of the people I have known who have professions had to be dragged kicking and screaming into retirement (if they retired at all).

You do not deserve a “C” for attending all of the classes. If 80% of success is showing up, then 90% of that is being ready to get to work when you get there. I tell my students that higher education is not a service. If you go to a restaurant, order a rare steak, and it arrives burnt, you get to send it back. You are not, however, a customer of the Higher Ed restaurant: you are an employee. You will start in the kitchen by cleaning pots and loading the dishwasher. Eventually, you may become a sous chef, chopping a lot of vegetables and learning to make sauces consistently. You will fail occasionally and have to eat your mistakes. Eventually, you may become a top chef and perhaps own your own restaurant, and your former boss will be grateful if you can book him a table on a busy night. Listen to your professors: they really DO know more than you do, especially about how to learn. College is not high school, and you can either accept that early and adapt or (like me) have to retake courses (which will cost you time and money). You do not possess the amazing power of multitasking denied to other human beings (look up the “Dunning-Kruger Effect”). The amount of perceived work in a course is inversely proportional to your interest in the subject. The more ways that you can find to make a subject interesting, the easier it gets. Nearly everything is interesting if you take a little time to see it in context. For example, if you find calculus a bore, go look up Newton and Leibnitz.

Who inspires you and why? Do you have any mentors or people of influence in your life?
I would have to say that Eugene Odum was one of my greatest influences. Gene was my “academic grandfather” (my Master’s thesis advisor was his Masters student). He was known as “The Father of Modern Ecology”, and was the only person I’m aware of who founded THREE laboratories (including the SREL). Among other things, he was famous for describing the “emergent properties” of ecosystems. His concept that “the whole is greater than the sum of its parts” revolutionized ecology. When I was a graduate student at UGA, I used to lurk outside his office and walk with him to the Institute of Ecology (which he also founded) and we would chat. One day, I mentioned that I had noticed that he always left the sidewalk and cut across the lawn at a different point. He explained that grass has adapted to being trampled by herbivores and grows better if it is disturbed, but not if the soil is compacted and forms a rut. Ever since, I have tried to never to take the same pathway twice. 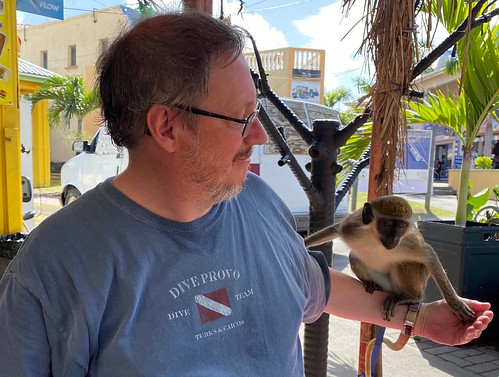 Anything else you’d like for us to know?
I appreciate the invitation to share my CCAC experience and how it helped me have a career that I never imagined at the time I would ever have. 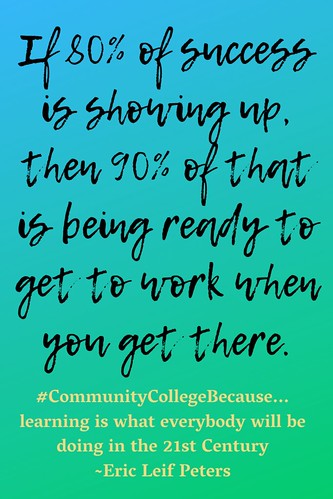 Read more stories, and why community college is so important, on #CommunityCollegeBecause: 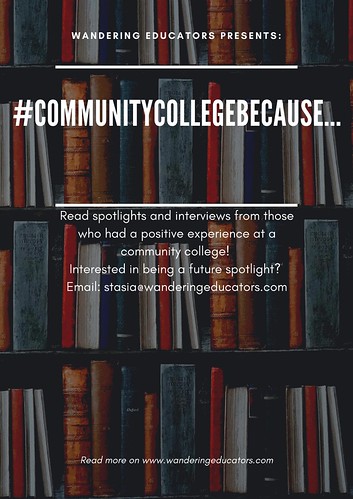 Stasia Lopez is the Global Education Editor for Wandering Educators and is also a Director of Career Services at the Community College of Allegheny County. She graduated with her Master’s degree in Educational Leadership in Higher Education and Student Affairs from Western Michigan University in 2013 and earned her Bachelor of Science in Business Administration degree in Hospitality and Tourism Management from Robert Morris University. Stasia is passionate about international education, travel, college to career topics and loves working on a college campus. She’s lived in four different U.S. states (Florida, Michigan, South Carolina, and Pennsylvania) and also studied and lived abroad in Rome, Italy. Stasia lives in the Pittsburgh area with her husband, Fernando, precious daughter, Maya, and playful kitty-cat Zorro.

Tags:
#CommunityCollegeBecause
higher education
learning
community college
stories
Back to Feed
Use left/right arrows to navigate the slideshow or swipe left/right if using a mobile device