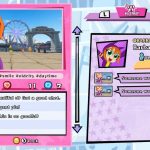 Growing up, I always wanted to be either Wonder Woman, Catwoman, or Batgirl. At the time, of course, my two favorite TV shows were Batman and Wonder Woman. As an adult, I’ve more or less held onto these favorites. In fact, the only reason I bought Injustice: Gods Among Us was to pretend to be my favorite characters. As much as I loved playing them, I found that the male characters’ powers and special moves were often cooler and more powerful.

However, whether you’re an adult who wants to be one of your favorite characters or a kid who wants to explore the world as one of the DC Super Hero Girls crew, the new Nintendo game is an excellent fit.

The new Nintendo game is based on the cartoon of the same name. While I know the characters, I tend to know them better from the book run instead of the TV show. Either way, it’s an excellent introduction to some iconic characters for kids, and the aesthetic fits Nintendo’s perfectly.

The game’s narrative follows Wonder Woman, Super Girl, and Batgirl in the aftermath of an attack on Hog’s Bay by a giant robot. Mayor Lex Luthor creates a fundraiser for rebuilding, and our Super Hero Girls are working to donate money as part of the project.

Thanks to Nintendo, I was able to get an early, insider view of the gameplay prior to the June 4, 2021 game release.

The game has limited variety of characters, but gives you the ability to play as either a heroine or villain. Each character has their own special combinations and parts in the storyline.

You can play as:

In terms of special powers and skills, all match what we know about the characters already. Wonder Woman has warrior skills, the Lasso of Truth, and a Flying Shield. Supergirl has Heat Vision and Super-Breath. Batgirl has a Batarang and Bathook.

The game has both creative and fighting missions. On the creative side, you’re helping to rebuild Hog’s Bay and getting to shop for cool super heroine and teen fashions.

On the fighting side, you’re getting the ability to battle your way through villains, like Livewire. Each fighting mission is replayable so that kids (or adults!) can improve their metrics.

As someone who has a “button masher” fighting style, the gameplay mostly revolves around the Y button but also has more complex controls for combos.

Boss battles are pattern-based, so that kids can start to recognize attacks. For the age group, we could even make the argument that there’s a bit of an “educational” value to this. After all, pattern detection is important for STEM subjects like math.

Similar to other videogames, DC Super Hero Girls encourages replay. As you play through the game, you earn coins and Power Stars based on metrics like hit points, speed, and preventing damage.

These let you power up the characters or buy new character outfits.

Aside from the traditional gameplay, DC Super Hero Girls also has two other cool features.

Lois Lane makes an appearance in the game by taking snapshots at the end of battles and reporting them in the school newspaper. The articles splash the screen at the end, and you can choose to screenshot or share them using your Nintendo Switch’s sharing function.

This feature is an in-game social media that can direct you toward side missions or notify you about new events happening in-game.

Currently, the game is available for pre-order on Nintendo’s website.

Although it’s only a single-player game (sorry moms, we can’t play with or against the kiddos this time), it’s got a great theme of girl power.

Click through to read all of “A First Look at Nintendo’s ‘DC Super Hero Girls: Teen Power’” at GeekMom.If you value content from GeekMom, please support us via Patreon or use this link to shop at Amazon. Thanks!

Click through to read all of "GeekMom: A First Look at Nintendo’s ‘DC Super Hero Girls: Teen Power’" at GeekDad.If you value content from GeekDad, please support us via Patreon or use this link to shop at Amazon. Thanks!