A series on some of London's best walking tours. This time, we speak to DJ (or Maneeta when he's in drag) from Dragged Around London. 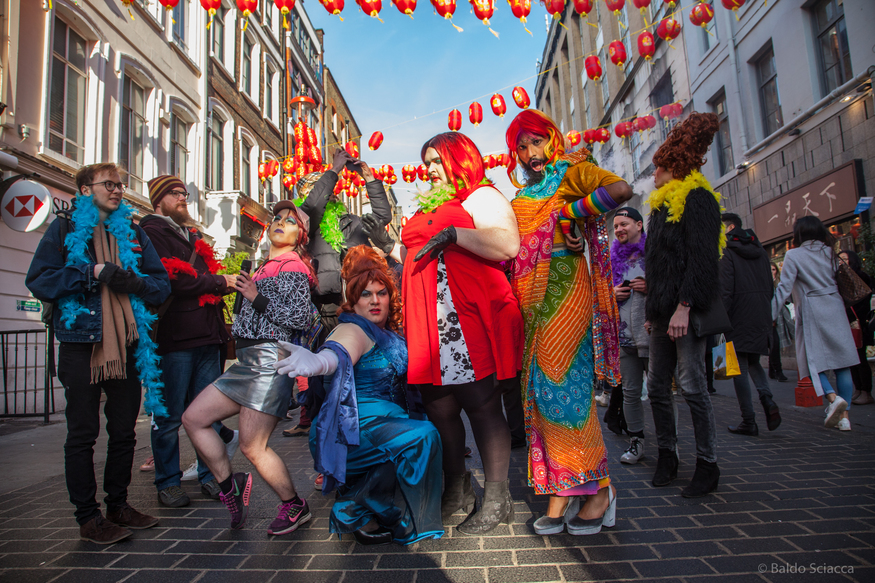 "I once heard a participant describe the tour as being in a 'mini pride parade' and I think that's accurate". Image © Baldo Sciacca.

Briefly describe your walks for us please!

I once heard a participant describe the tour as being in a 'mini pride parade' and I think that's accurate. Our tours are fun, fruity, and fabulous. We get everyone to wear a rainbow sash (we used to do feather boas but were shedding feathers everywhere!) to mince through London, learning little known (and sometimes titillating) facts about the sights, and having an absolute laugh. We march through the streets as an absolute spectacle, dancing away to music that we cart around with us, quite literally unleashing drag into the light of day! 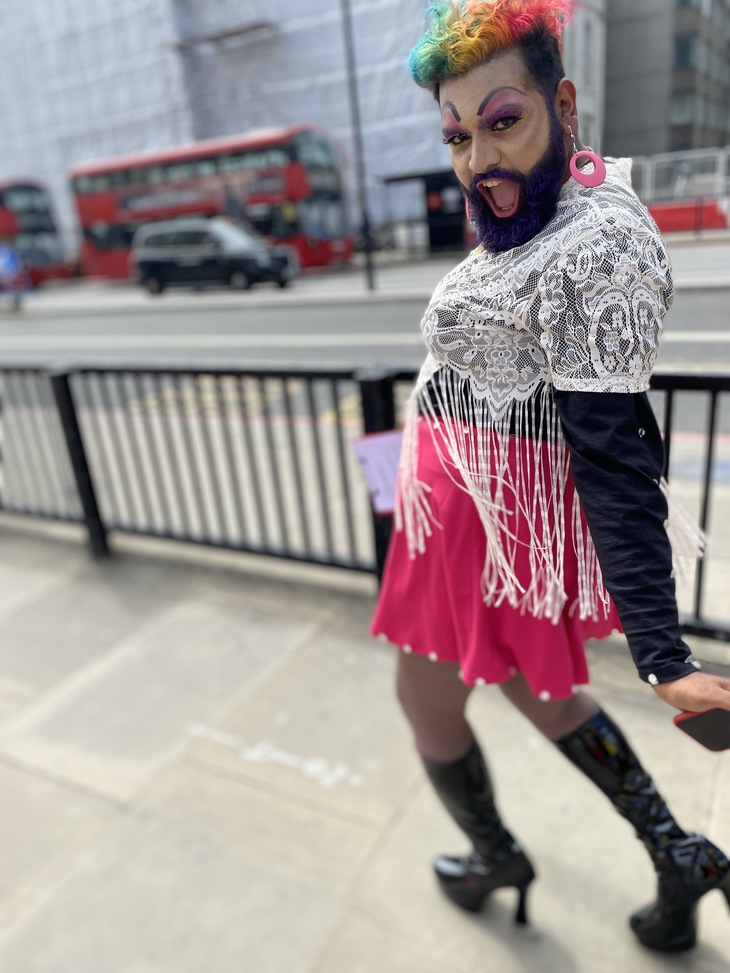 This way if you please. Image © Department of Work & Pensions.

And where does all this happen?

We currently have three tours. The flagship, West Mincer, starts and ends at Halfway to Heaven, and goes around Westminster. Our second tour, Extreme Tourists, created by our performer Wet Bambie, explores some of central London's tourist spots starting in Mayfair, and heading right over to Leicester Square and then back. Our third and most popular tour is Going Down South, which rolls down Southbank from Monument, heading down to the London Eye. One of our performers is also in the process of creating a new tour that will be based around Soho, and we think that one is likely to be a bit focused on fetish and queer history.

We also started bus tours in 2019, originally as a part of a Pride promotion with The Original Tour company, and are looking into making these ongoing.

And we do special 'Hallowqueen' tours around Halloween, where we form a little coven with attendees and go around summoning ghosts of London past. 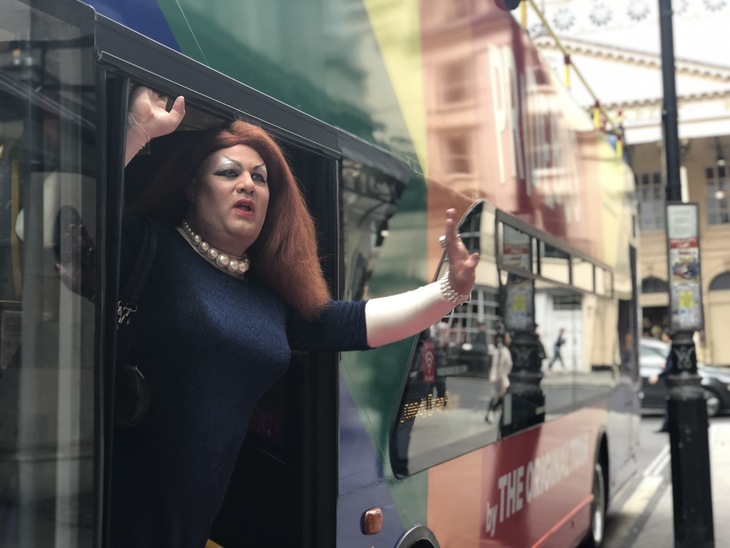 They also do bus tours around Pride time, and hope to make them more regular. Image © Dragged Around London.

What happens on your tours that wouldn't happen on any other London walk?

Apart from obviously being led by drag performers, which as far as I'm aware doesn't exist anywhere else, we also have music on a speaker (so we're literally always dancing and singing away), and we are always creating new, fun interactive activities that are unique to that tour — from lip-sync offs to mini-races to fortune telling to mini-voguing classes! No two tours have ever been the same! 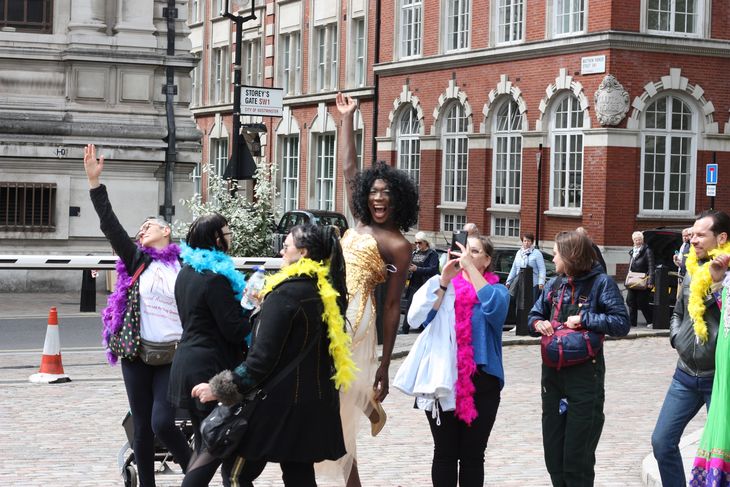 "We march through the streets as an absolute spectacle, dancing away to music that we are carting around with us". Image © Milo Gildea.

As well as learning about London's history, people can also expect a personal anecdote or two, right?

Not just one or two. Drag is built on a foundation of being educational, and we try our best to use our lived experience — as drag artists, as LGBTQIA+ members, as our various gender identities, as immigrants or Londoners — to give our participants a little taste of a world they may never have had insight into before. 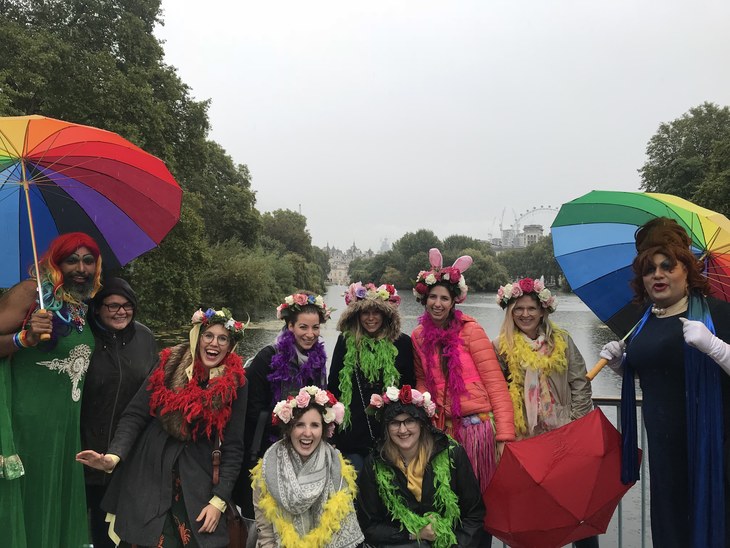 Tell us something surprising that people learn on your tours...

My favourite little story (which we mention on both the West Mincer and the Going Down South tours) is that there was an elephant that had once been in the royal menagerie at St James's Park and was then moved to the Tower of London. But this elephant got terribly depressed — who wouldn't being cooped up in there! — and kept sitting on her keepers. So there was a very British solution to such a problem — they fed her a gallon of wine to keep her happy! I don't know how actually accurate it is, but it's a lot of fun to tell the story... 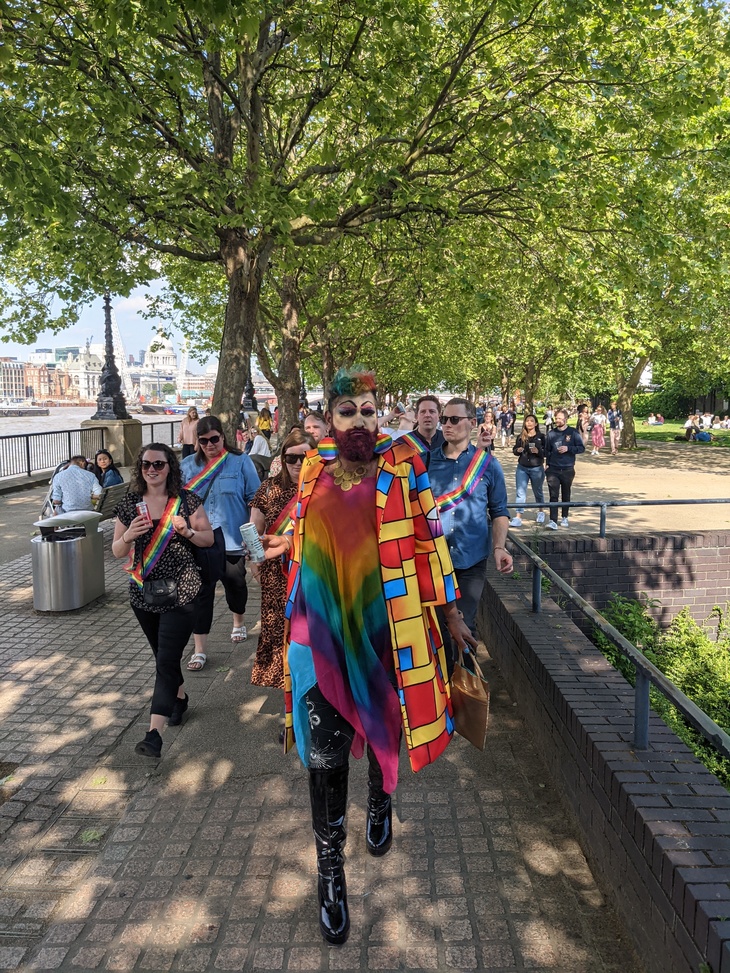 Easier to spot than an umbrella held aloft. Image © Dragged Around London

Who are a few of the historical heroes and heroines who shine through on your tours?

Well the wife of the Duke of York, Mary Clarke, has an amazing story that I love telling on the West Mincer tour. And we stop at the statues of Florence Nightingale and Queen Alexandria on that tour. And, of course, we talk about Queen Victoria around whom there are some titillating tales! There are also all the people around Parliament Square... that tour is full of heroes and heroines! 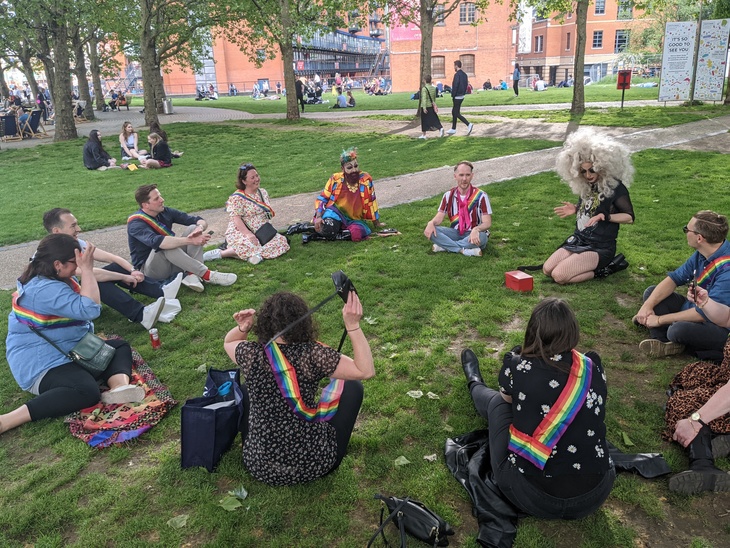 And if you had to choose one stop/landmark on a Dragged Around London, what is it, and why?

I think it would have to be outside Southwark Cathedral on the Going Down South tour — there's this beautiful open space there and we've just done so many different fun games and activities in that space. It's always been the most enjoyable part for me. 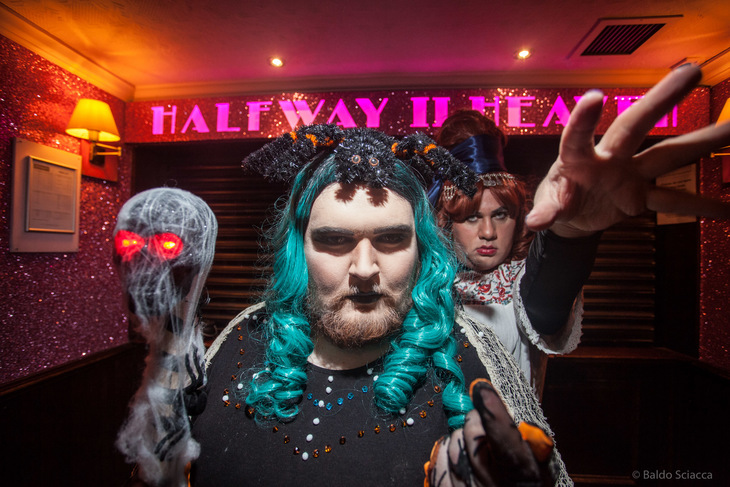 They even do 'Hallowqueen' tours every October. Image © Baldo Sciacca

Do customers need to bring their dancing and lip syncing A-game?

We are very big on consent. If you prefer to blend into the background we're not going to force you into the spotlight. But I do have to say, the tours that have been the most fun have been when the participants have gotten fully into it, dancing away and belting out songs as we walk down the street!

Of course, sometimes we do have lip sync battles and dance-offs, and there are prizes to be won, so bringing your A-game is very much worth it! 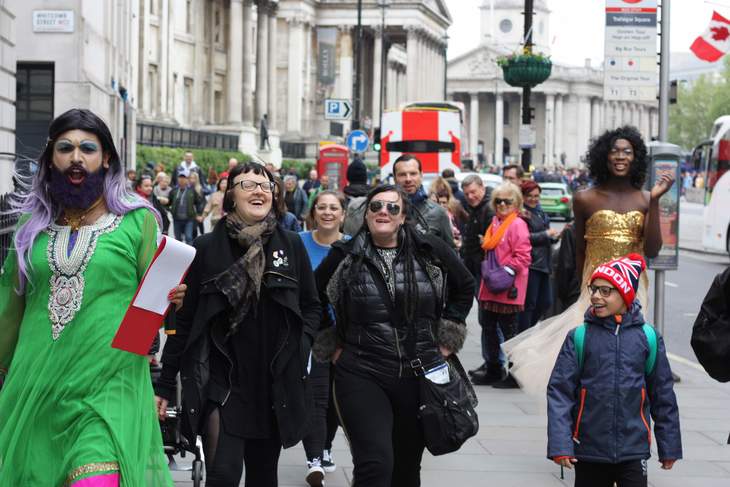 "It's always really, really lovely to meet people from all around the world and show them a few of the sights of London with a little more colour than they might otherwise find it". Image © Milo Gildea

What's your favourite thing about doing these walks?

I've been asked this a lot, and my answer is actually the reactions we get from everyone else. Our little group forms our little rainbow bubble of joy and you can see it on so many faces out there looking at us being like "What is that?" and "How do I join this!?" It's invigorating!

Also pre-Covid, most of our tours were filled with tourists, so it was always really, really lovely to meet people from all around the world and show them a few of the sights of London with a little more colour than they might otherwise find it (in our very often grey city!). 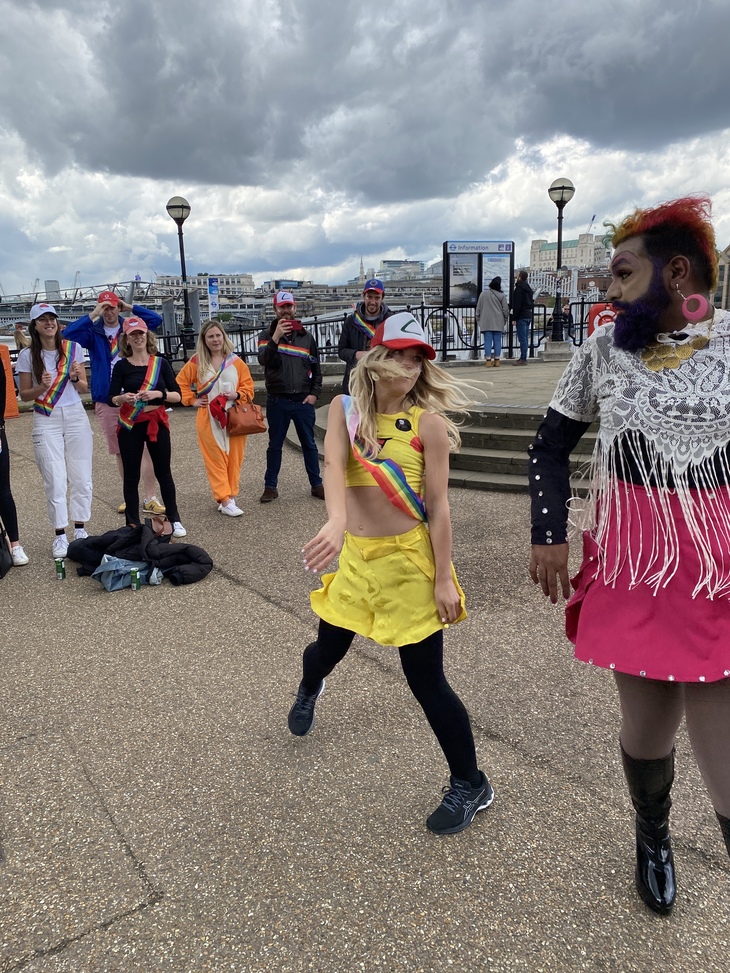 You don't HAVE to dance but you'll have more fun if you do. Image © Dragged Around London.

What do people come away with at the end of a Dragged Around London tour?

Enormous smiles. I don't think there's been a tour when everyone hasn't been smiling and laughing at the end. I would hope that people also come away with a sense of how diverse drag can be, and the understanding that drag is for everyone and we all get to enjoy it, anywhere. 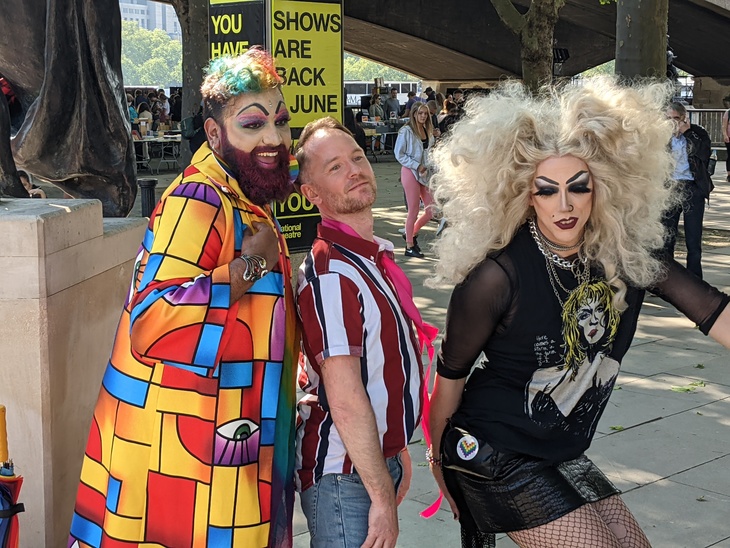 People come away with enormous smiles. Image © Dragged Around London.

What's the nicest thing a punter has said?

Someone who had organised a customised hen do for their friend said to me, "I knew when I booked this it was going to be amazing but I don't think it was possible for me to know it would be this much fun. I really appreciate all the energy you put into this." That made my day.