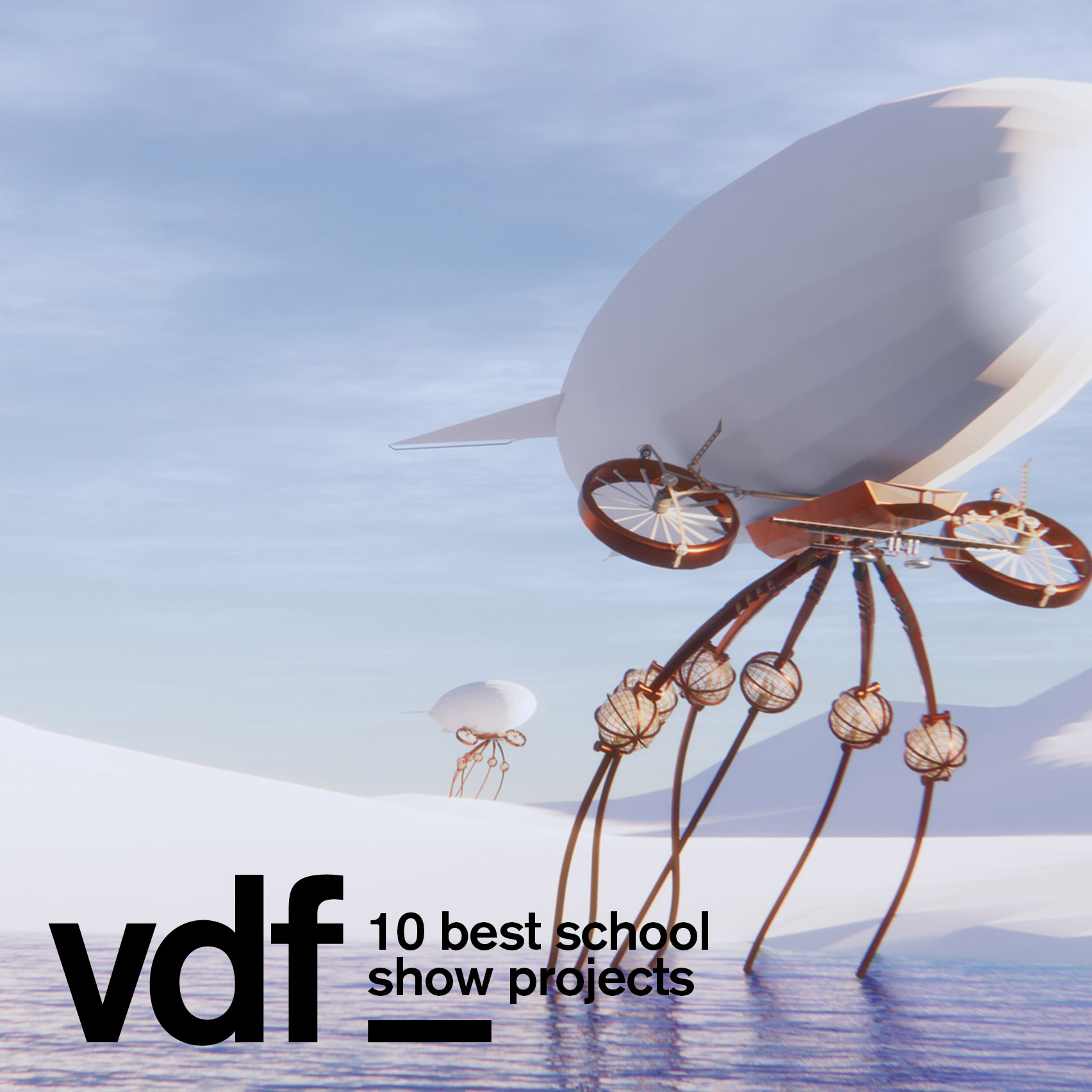 For Virtual Design Festival's final week we take a look at 10 of the most innovative projects from the VDF school shows, our initiative that offers a platform for graduates to showcase their work during the coronavirus pandemic.

The VDF school shows have enabled students who missed out on physical graduation shows to present their work to Virtual Design Festival's audience. Over 50 schools have participated, featuring the work of more than 570 students, making it one of the biggest ever digital celebrations of student design.

Schools from locations as diverse as Jamaica, the UAE, Australia, Lithuania, Germany and the USA have shown student work and the feedback from participating schools has been overwhelmingly positive.

"The whole faculty is very excited and thrilled that they had this opportunity to finish an exhausting semester with such a special highlight," said Roswitha Janowski-Fritsch, head of publications and PR at the Institute of Architecture in Vienna.

"We all hope that this initiative will survive even when the crisis is over," she added.

Below is our round-up of ten of the most fascinating projects from the architecture and design school shows, as chosen by the VDF editorial team. 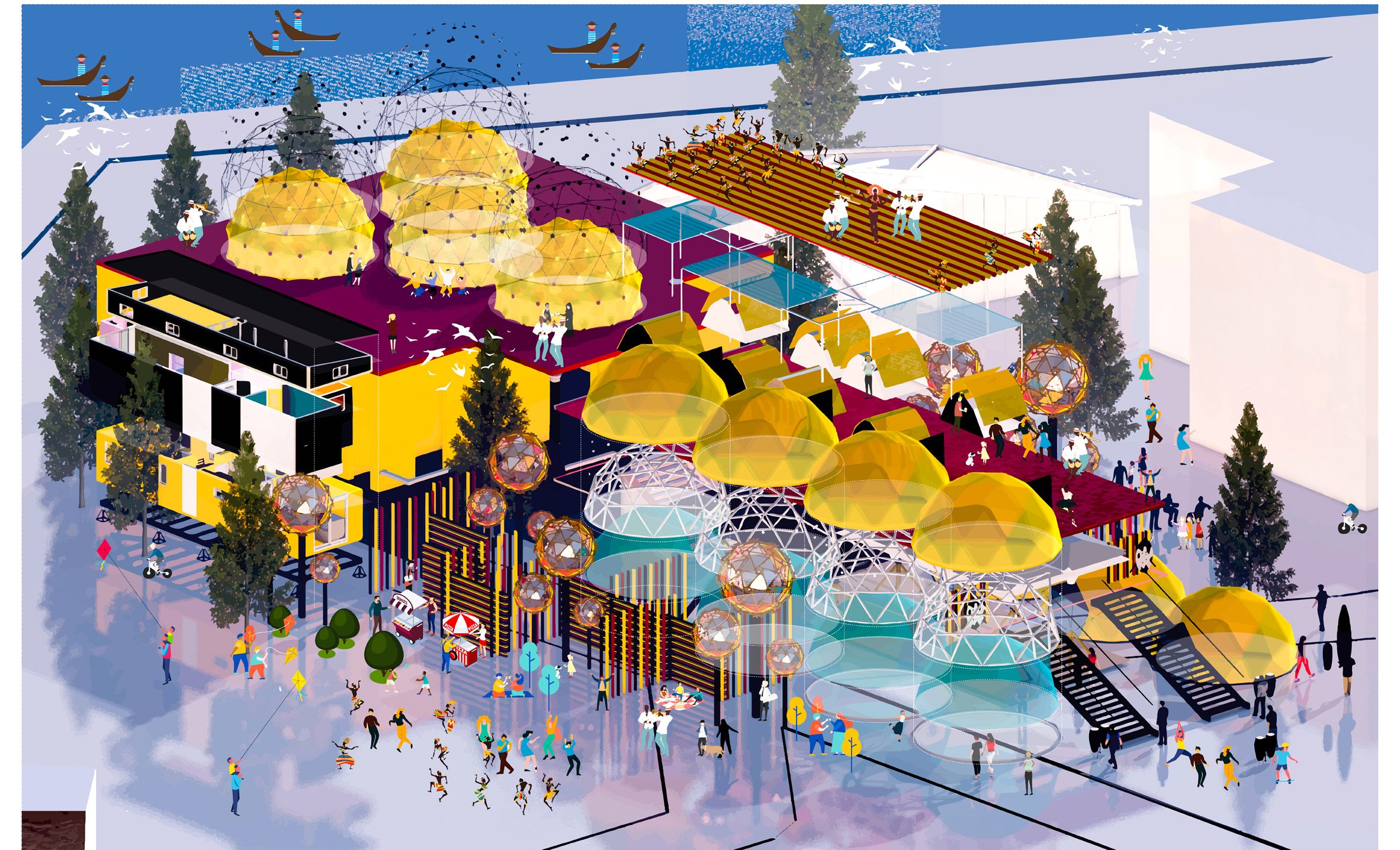 Wallace Erabu's speculative structure "develops a mutable intervention that travels on both land and water from Brownsea Island in the UK to Venice in Italy and then on to Uganda," the architecture graduate explained.

It would also double up as the Ugandan pavilion at the Venice Biennale, marking the first time East Africa is represented.

"The aim is to incorporate my own national identity and cultural references within the design proposal, in the form of weaving techniques, fabrics, materials and the medium of dance," Wallace Erabu said. 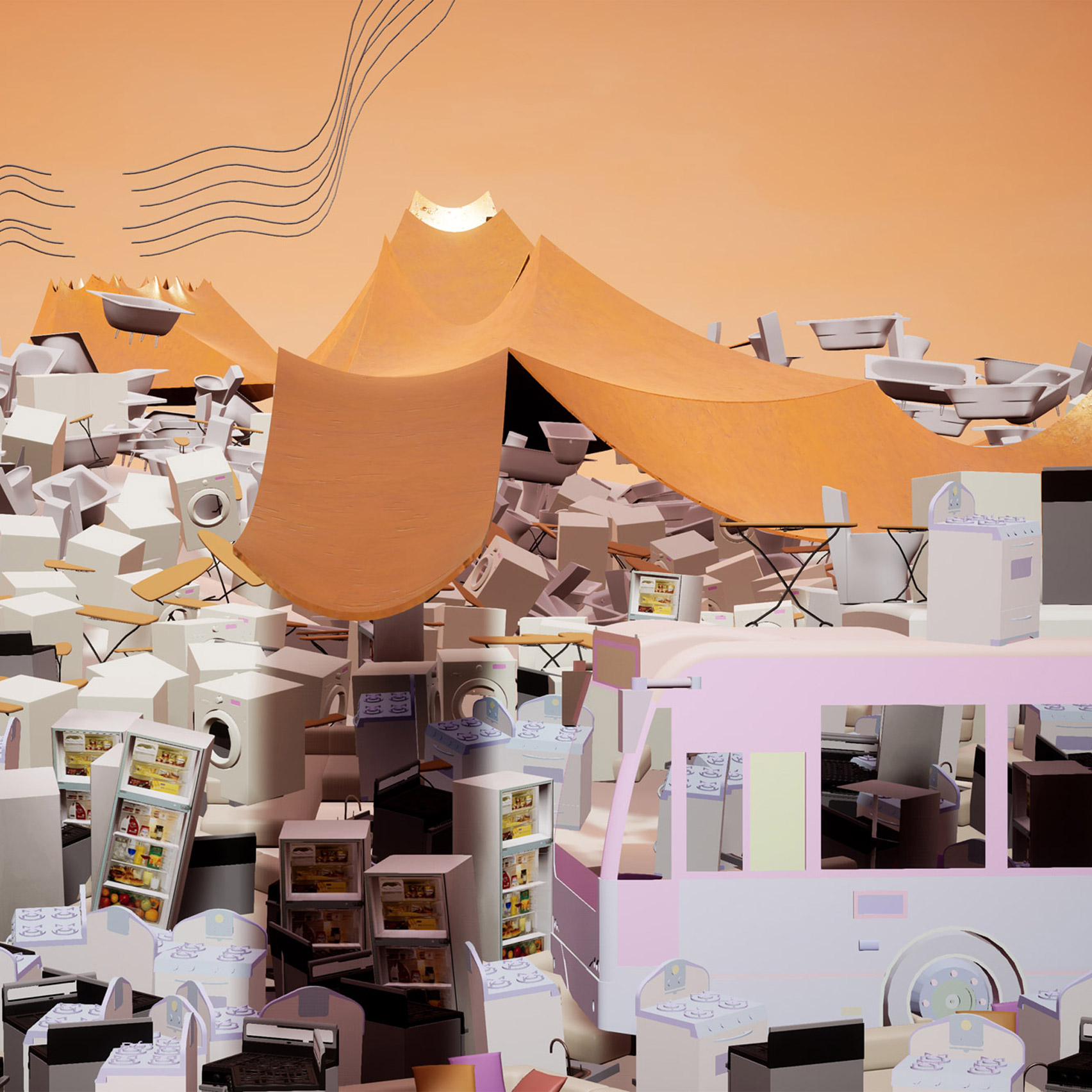 "The Palace under Maintenance assembles a women's collective and with its domestic settings respects Roma culture and the traditional role of a woman within a family by supporting the production of dailiness," Mazur explained.

"Simultaneously, bringing the private to the public reveals the possibilities of gaining a critical attitude to gender discourse in the Roma realm." 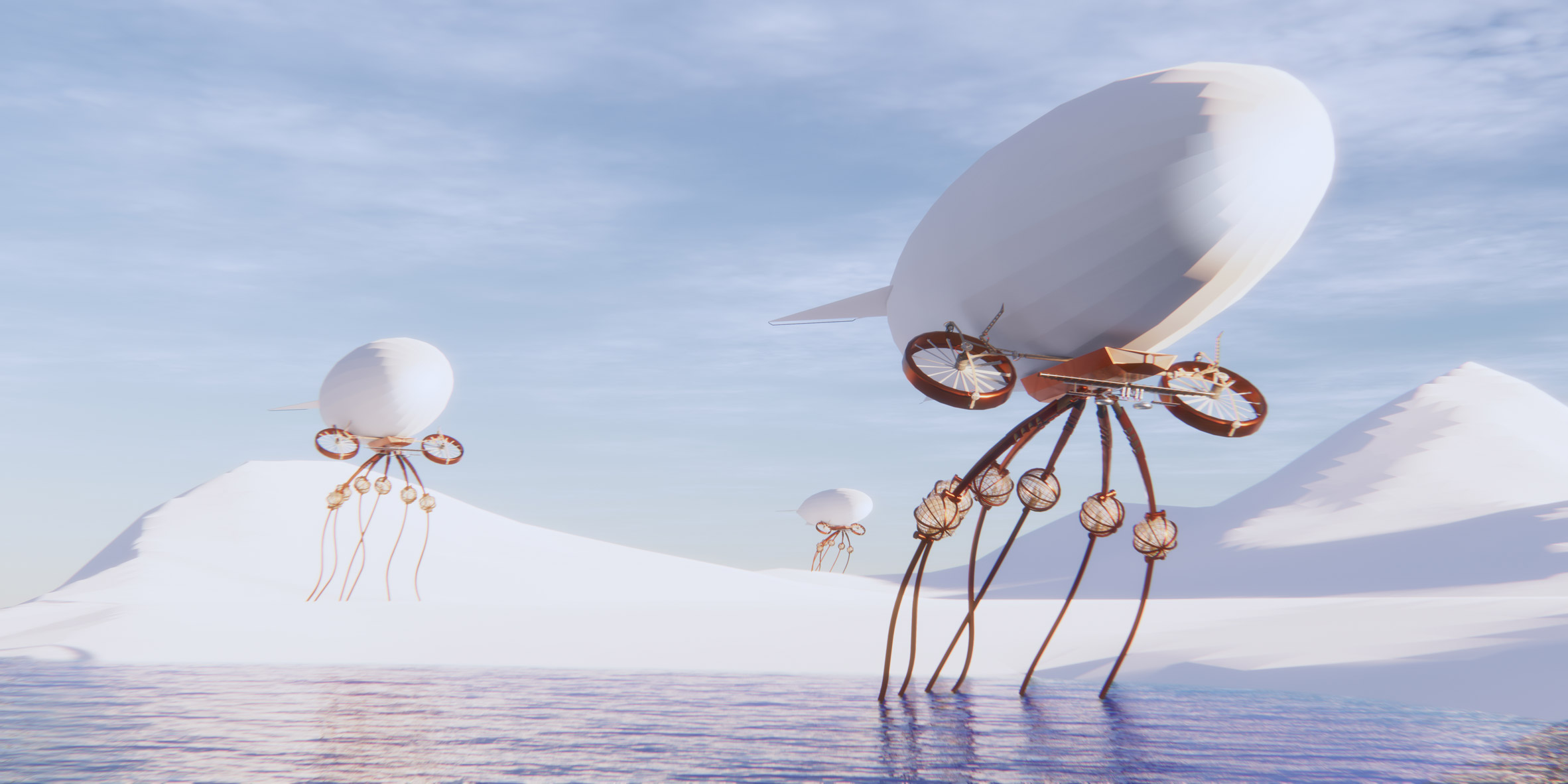 Beach's project looks at a "tragic what-if scenario," he explained. "In the 1890s, the indigenous people of Canada's Arctic were, at their request, left isolated after a brief period of technological and resource exchange with the Western world."

Beach imagines a re-connection with the indigenous people, who have evolved 19th century Western technology and formed an otherworldly society living and hunting with advanced electric dirigibles and gliders.

The project was created for the Extreme Landscapes studio. 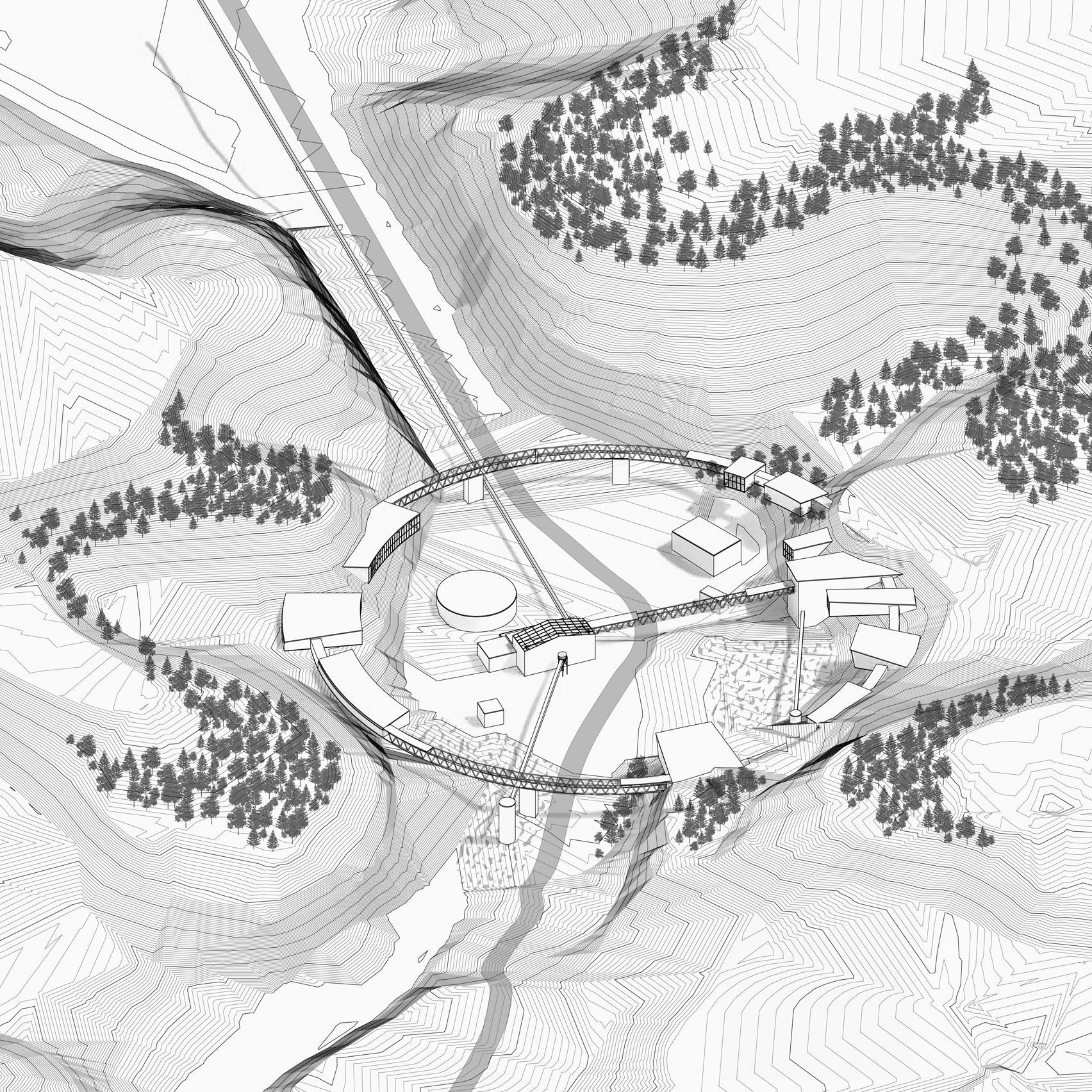 Foote and Bowling's Somewhere Project imagines an educational centre and museum located on an abandoned coal mine in Eastern Kentucky.

"A collection of educational buildings is embedded into ravine walls, an artificial landform created by mountaintop removal processes," the students said. The building features a circular walkway that intermittently cuts into and reemerges from the ground, evoking the descent and ascent of coal miners.

"The project's circumambulatory experience celebrates the coal industry's history while serving as a reminder of the economic and environmental destruction it caused," Foote and Bowling explained. 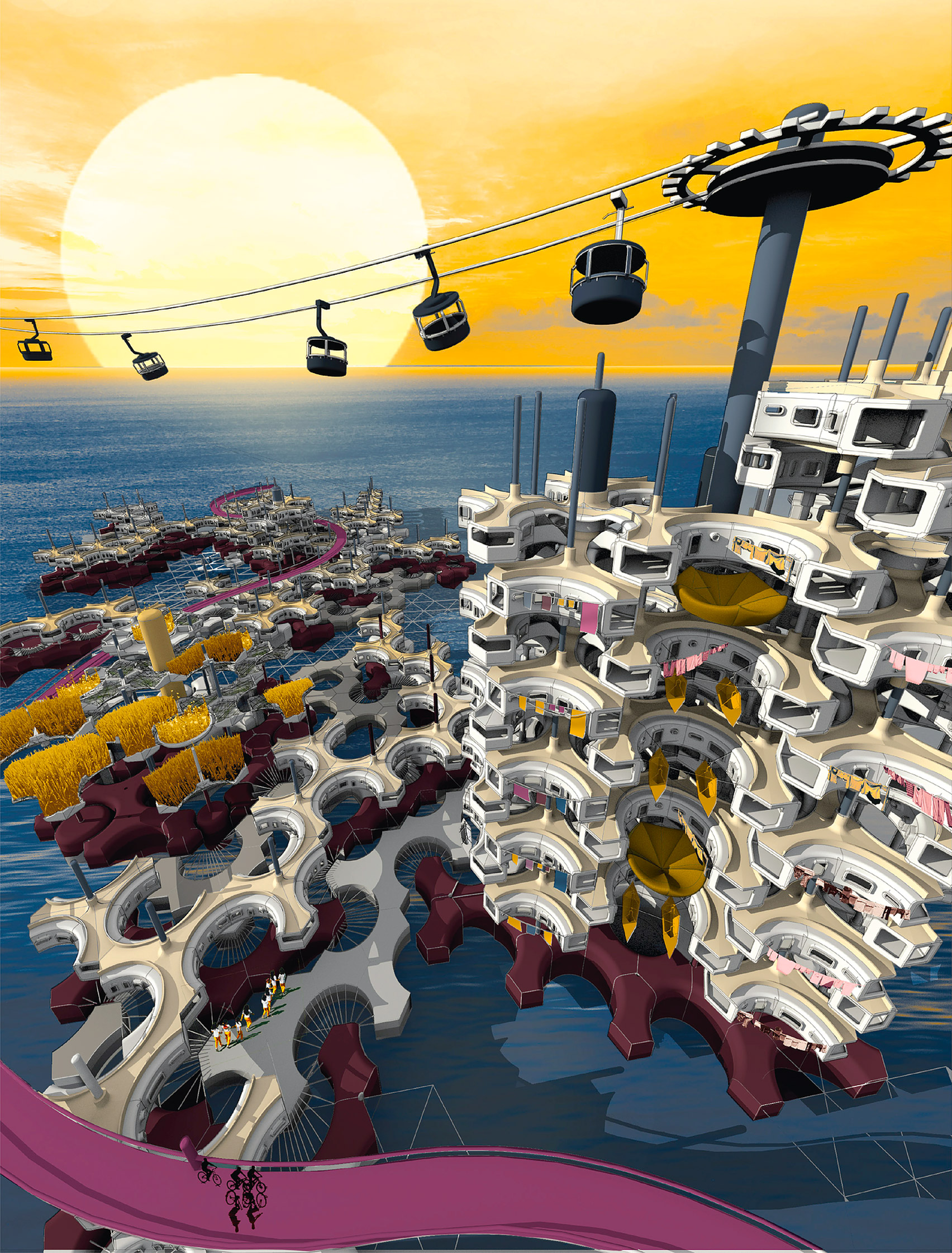 Many of the student projects show as part of the VDF school shows had a strong focus on sustainability, including this one by Clara Chow Koi Rong.

With the world's coasts increasingly urbanised, Khoi Rong's Plasticity "aims to employ plastics found in rivers and mechanise the landscape to collect them, in order to allow for the building of a plastic-city that is resilient to adversities of climate change in the future," the university stated.

Visit the Singapore University of Technology and Design virtual show › 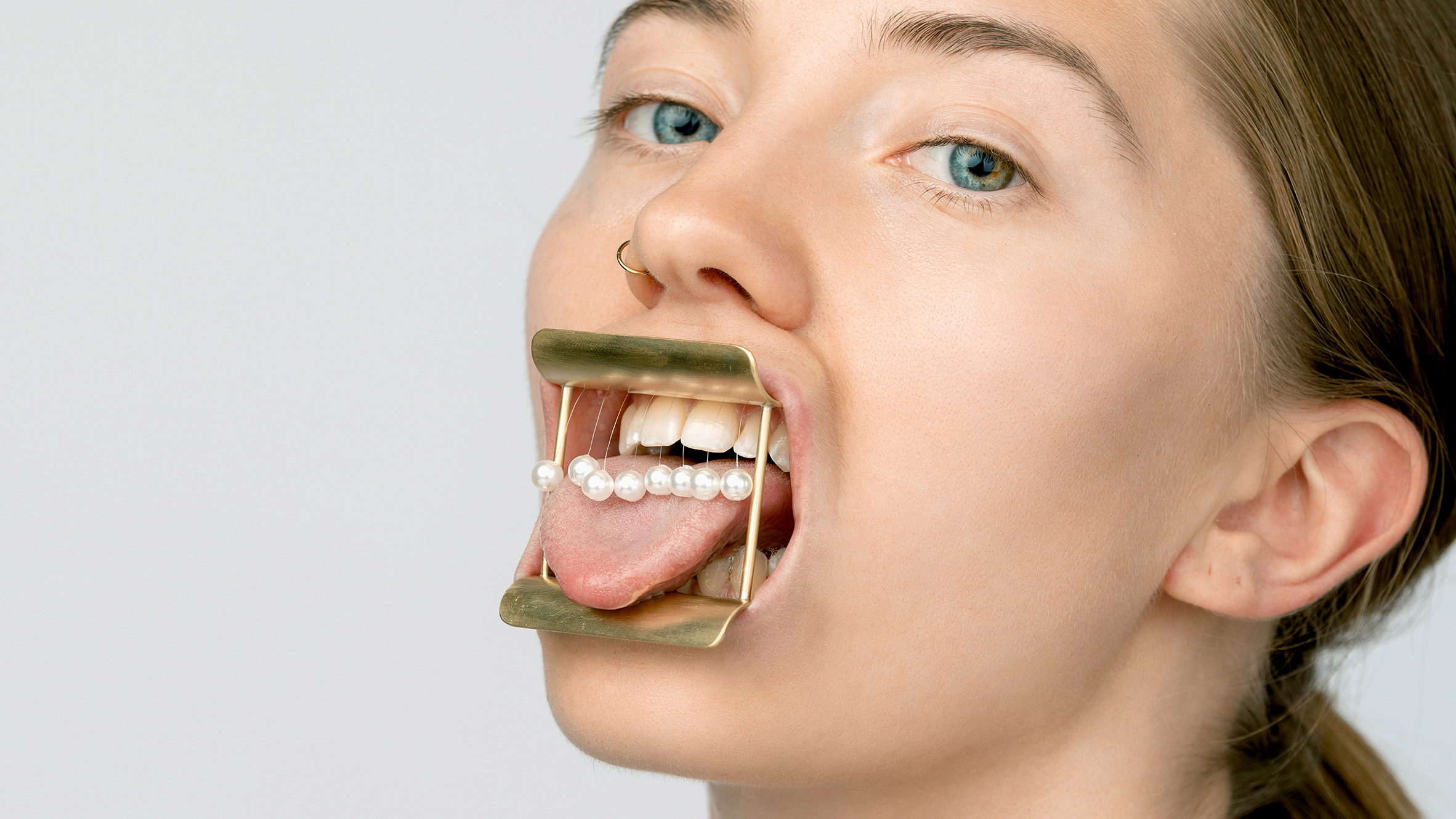 Müller's jewellery collection aims to create a "facial metamorphosis" and was produced as part of the Lucerne School of Art and Design's XS Jewellery degree. The degree took "a new approach to designing and creating unique products fundamentally related to the human body", according to the university.

"With this work, I hope to create a playful yet critical exploration of the often painstaking practices of bodily or facial modification, to which individuals from all cultures have been eternally drawn," the designer said.

Visit the Lucerne School of Art and Design virtual show ›

Middlesex University students showed a selection of projects by students from its product design degree, among them Powell-Farquharson's Play Things.

The tools were created for children who from suffer dyspraxia – a condition that affects physical co-ordination – and often struggle to develop muscle tone and the co-ordination needed to be able to write.

"Play Things is a game controller that enables them to target and train a series of muscles in their hands, wrist and forearms, which are involved in the writing process," the designer explained. 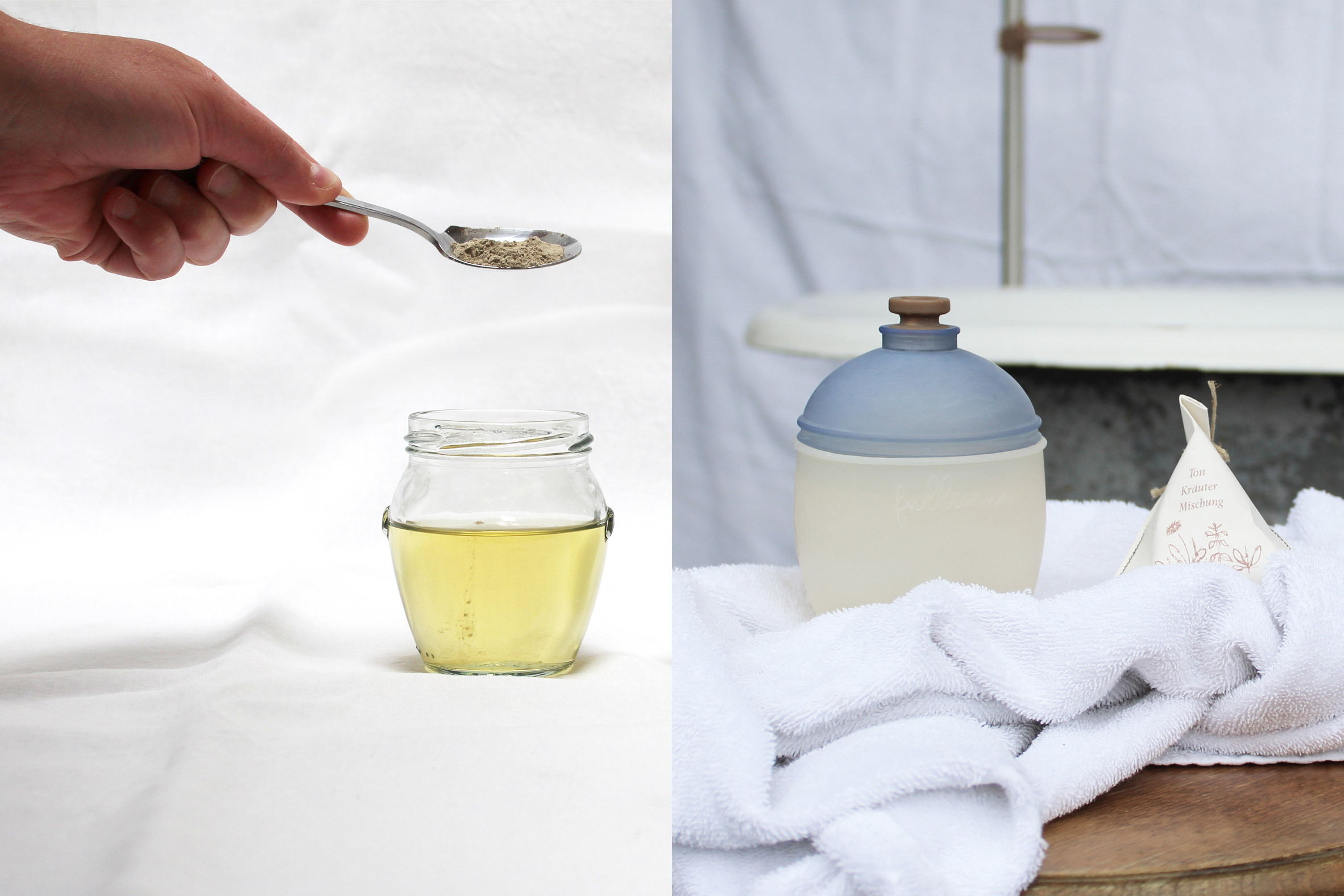 Fullonum by Petra Wyss
Lucerne School of Art and Design

Wyss' Fullonum project consists of a vessel and a DIY recipe for a liquid soap, made from the user's own urine.

"Using selected Swiss herbs and clay, Fullonum transforms the user's urine into a cleansing, anti-bacterial liquid soap with the aroma of fresh hay," the designer said. "Be pristine, shower with urine."

Fullonum is meant to be an environmentally-friendly alternative to synthetic gels and soaps that is also kind to the skin. "Fullonum explores the realm of natural ingredients that have been used for personal hygiene since antiquity," Wyss said.

Visit the Lucerne School of Art and Design virtual show › 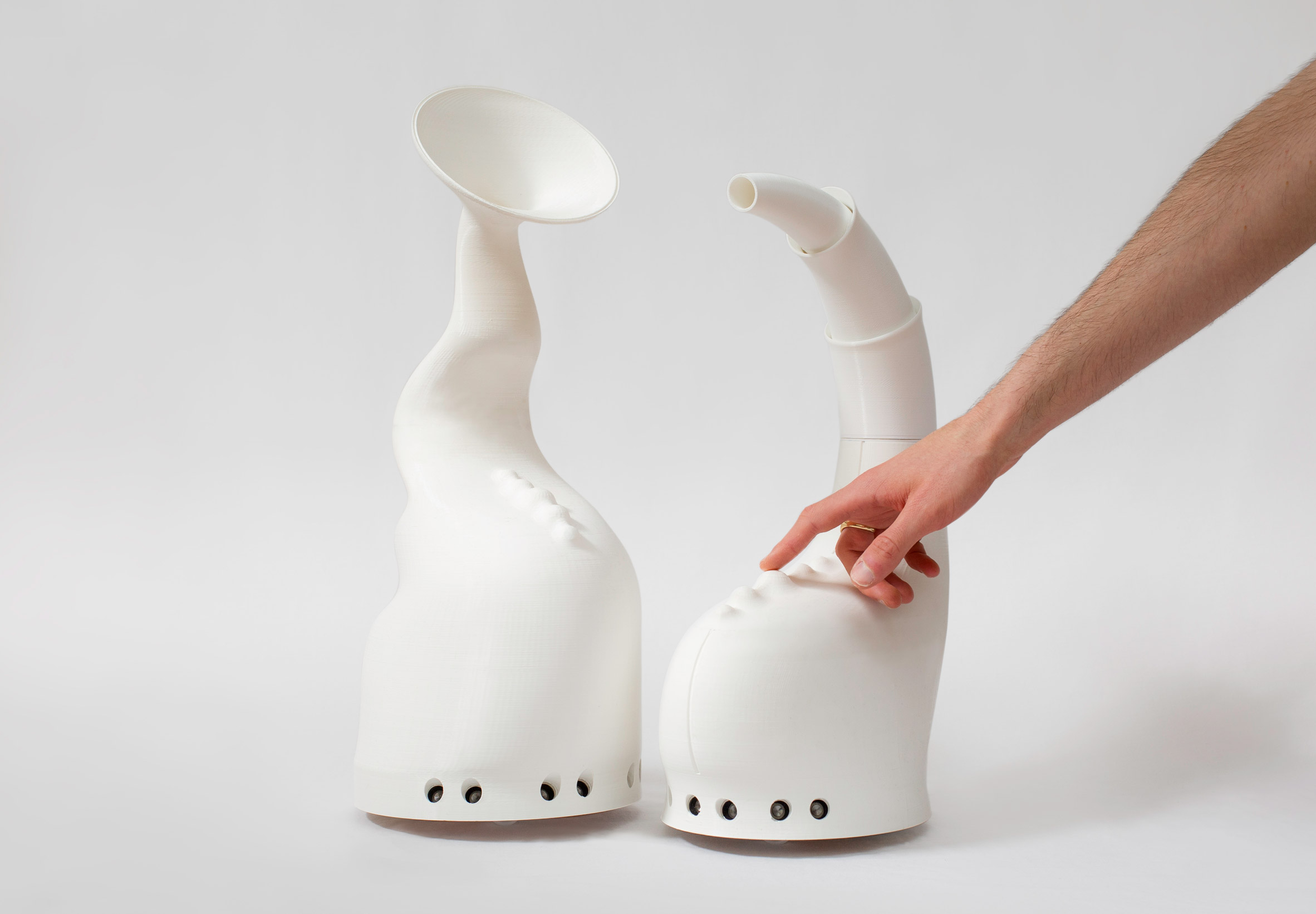 Macdonald's smart assistants aren't content to stay mute and helpful. Instead, they demand that users feed them data and in return provide access to hyper-personalised full functionality.

"This leaves the user with a paradoxical question: whether keeping their pets alive and functioning at their fullest warrants breaking boundaries in relation to their own data privacy," the designer explained.

The objects feature touchpoints that indicate their moods, allowing users to start building relationships with the smart assistants in the same way we do with pets. 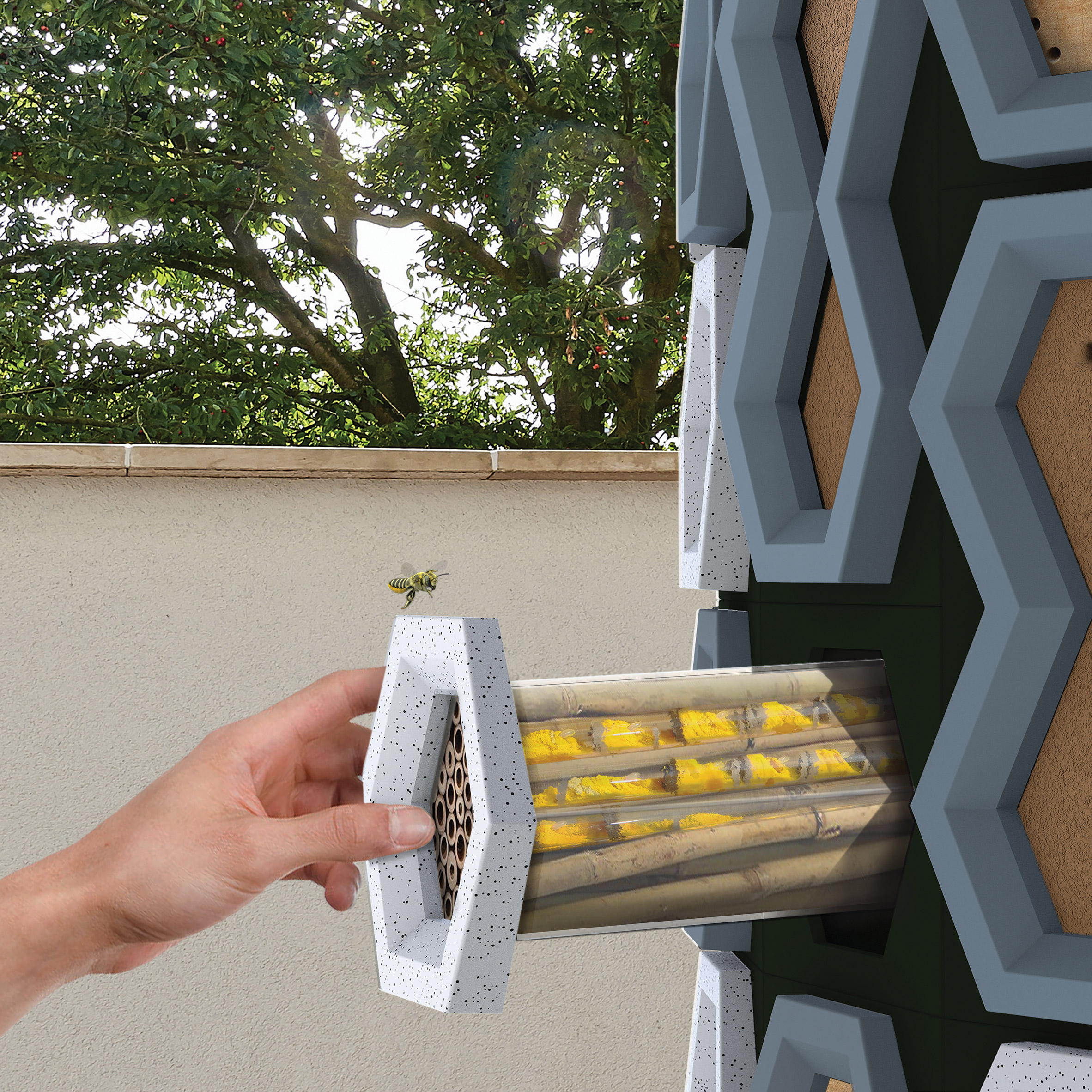 Henderson-Pitman designed Pollen to help native Australian bees, which are under threat of extinction due to habitat loss, climate change and pesticide use.

"Pollen is a modular native bee neighbourhood which provides a safe habitat for them to nest in while allowing users to interact and engage with these unique creatures," she explained.

The "bee neighbourhood" can be configured to fit even the smallest of outdoor spaces and was designed as part of the university's industrial product design course.

Virtual Design Festival's student and schools initiative offers a simple and affordable platform for student and graduate groups to present their work during the coronavirus pandemic. Click here for more details.

The post Ten of the most interesting projects from Virtual Design Festival's school shows appeared first on Dezeen.