The 10 Best Theme Parks To Visit in America

Nothing says summer in the United States like a trip to the country’s best amusement parks! We don’t know if it’s the heat or the thrill of the plunge through an upside-down loop, but there’s something about theme parks that just makes us grin.

Not all theme parks, amusement parks, and carnivals are created equal, however. The local fairs that come and go can be a lot of fun, but they don’t offer the same high-velocity, death-defying rides or 100%-in themed fun that the big names maintain. In other words, there’s something for everyone whether making a road trip out of it, buying a season pass, or just keeping it close to home.

This top 10 tour of America’s best theme parks is suited for the adventurous and fun-loving, so check your height, load on, and fasten your seatbelts. Here are our favorite names in the parks and resorts racket.

Note: Thrill seekers and amusement park goers are encouraged to review COVID-19 protocols before heading to any theme park. Follow local restrictions and respect posted guidelines at all times.

1. Take on the Valravn at Cedar Point in Sandusky, Ohio 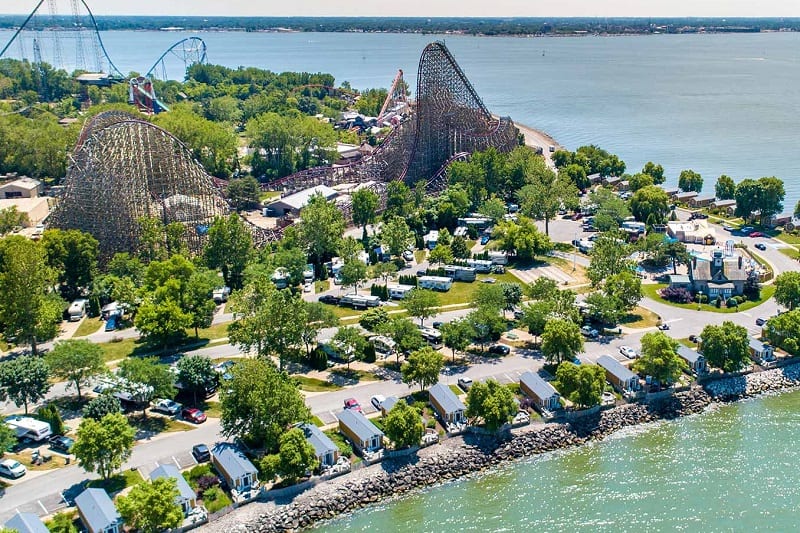 Ohio may not be the first place that comes to mind when somebody mentions theme park rides, but that’s part of the appeal of this Lake Erie-based amusement park. Cedar Point currently has 18 roller coasters on the roster. As an added bonus, the crowds are generally more local so waits aren’t always as gnarly as they might be at a park that boasts national fame.

As you prepare to enter the park, you’ll hear everybody chatting about the Valravn (Height requirement: 52″ minimum) at the gates. Are you going to go on it? It’s 223 feet high! You feel like you’re falling over the edge, and then woosh! Of course, some will chicken out!

Riders get a lot of thrills on the Valravn because it doesn’t only send them through a 270 degree roll but also down a second drop of 131 feet to complete the course. The only word left to describe this ride is exhilarating. If you’re in Ohio, you might as well make a day of it!

2. Crawl Inside Your Television with Universal Studio Tour in Orlando, Florida 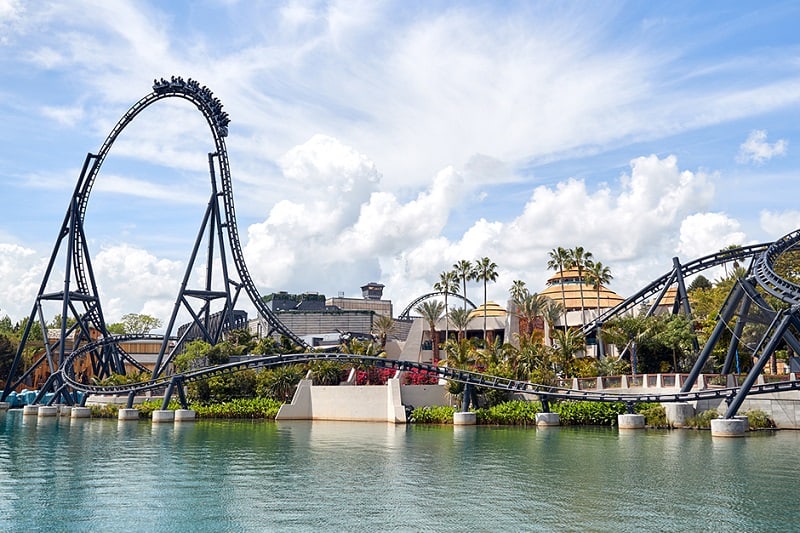 80s and 90s kids remember getting hyped about Universal Studio in Orlando, Florida, just because our favorite television show characters would be there. Whether we made our way or not as kids, we can now take full advantage of what the park has to offer.

True, the park has seen its changes, but fan-favorite television shows and movies still make the rounds with the likes of The Simpsons and Harry Potter well-represented.

Some of the rides take us on a trip to yesteryear, like the Revenge of the Mummy and the Men in Black Alien Attack. The first is dubbed exciting (but not frightening) by most visitors. The Men in Black attraction includes alien-shooting play.

If you’d rather leave the aliens alone, check out the E.T. Adventure, the only remaining activity from the venue’s first day. It’s a good throwback, that’s for sure! Don’t forget to end the trip with a walk through the souvenir store. Half of the fun of going is picking up a memory so you can treasure the trip for years to come.

3. Take it to Tinsel Town for Universal Studios Hollywood in California 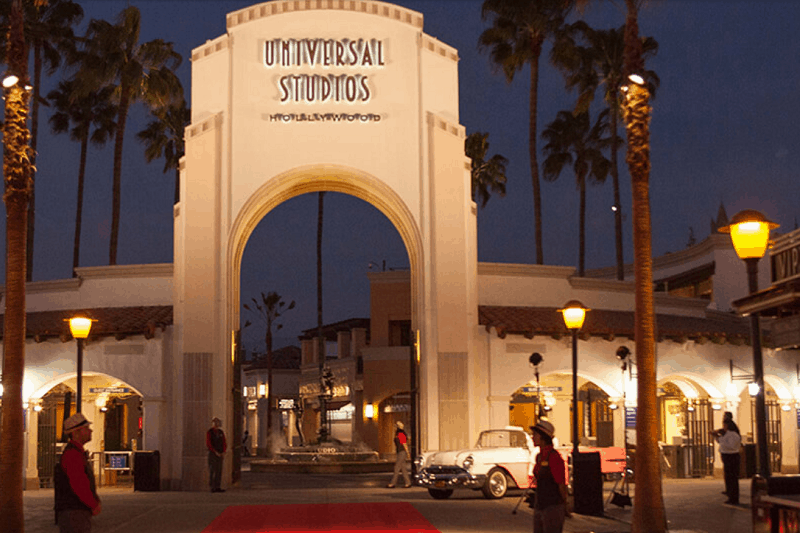 Hollywood, California is famous for its connection to the silver screen. The Universal Studios Hollywood attraction adds to the allure. Those who frequent the attractions often say it’s totally doable to get in and out in one day, which means a great value for a quick stop while in town.

The park is fairly small, but that doesn’t mean it’s not worth visiting. On the contrary, going on every ride before the park closes will feel like an attainable goal.

It’s a classic road trip destination, so hotels are easy to find. You even take the Metro there via Universal City Station. If you’re driving, you don’t have to worry.

The best time to go is when it’s not the weekend or a school holiday. If you go during busy times, be prepared to wait in long lines. It’s when everybody does, so backups are common. You can find visitors grabbing a cold one at Moe’s Tavern after checking out the Shrek 4D experience.

Fun fact: The land is split between unincorporated Universal City and Los Angeles proper. This means lodging, eating, and entertainment options are plentiful. 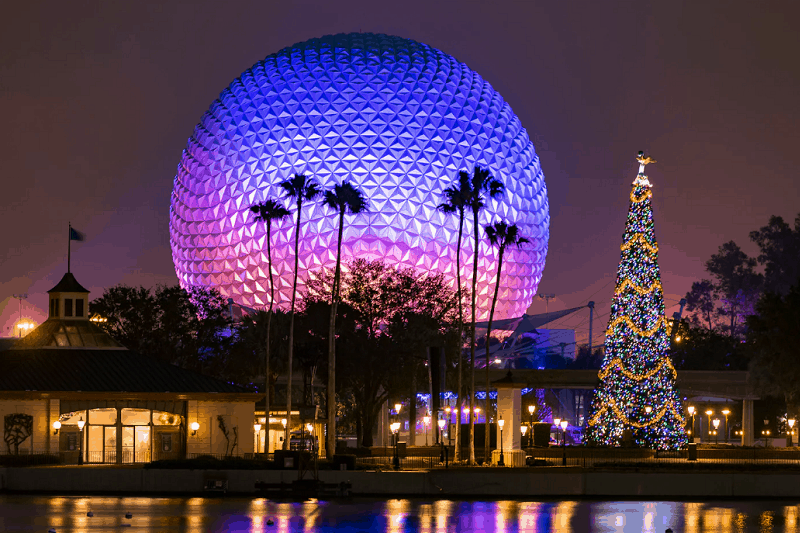 Back in the day, it wasn’t uncommon for a bunch of kids to respond “I went to Epcot Theme Park in Lake Buena Vista, Florida” when asked what they did over their time off on the first day of school after a long break. Even today, this Walt Disney World Resort is still quite the hit in some crowds, especially those who want to see the world without having to get a passport.

It’s a resort with an international appeal as countries from around the world are represented in a series of curious attractions. One of the most recommended is one of a Mexican flavor, the Gran Fiesta Tour boat ride. We recommended La Cava del Tequila for a quick drink, especially for brunch!

Another can’t miss ride is Living with the Land. It’s a boat tour that takes riders through swamps, farms, and a stylistic greenhouse that really grows plans.

The produce is used elsewhere on the property! Some people worry it’s a little too educational for a theme park, but most naysayers have changed their tune after experiencing it.

5. Have You Been to Busch Gardens in Tampa, Florida? 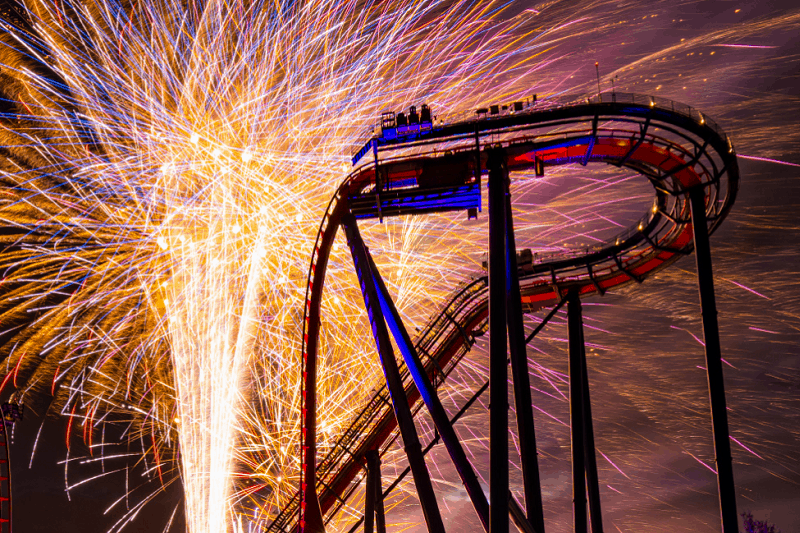 Another fan favorite out of Florida, Busch Gardens remains a hidden gem in Tampa. For some, the Africa-themed park offers the best of both worlds: a ride on a rollercoaster and a world-class zoo. Their current claim to fame is the tallest freestanding drop tower in North America, standing at 335 feet.

The ride gives you a front row seat to the action by turning your body 90 degrees so you drop face first, staring at the ground as you fall. On the way up, the Busch Gardens’ Falcon’s Fury offers stunning views of Tampa’s downtown as well as of the park.

That’s the cherry on top of what might be the perfect amusement park ride. The rating of the machine is “extreme,” so it’s not for everybody (including people who are shorter than 54”).

See more about - 10 Essentials For A Throwback Summer Road Trip 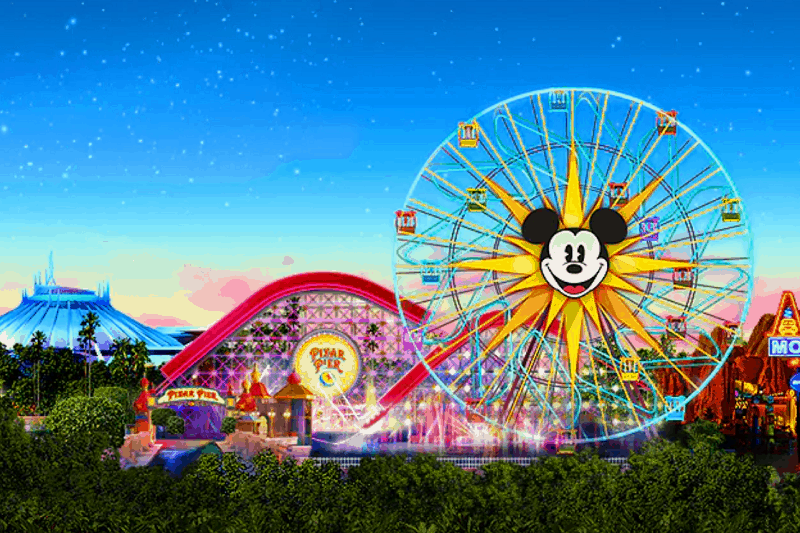 Riding Splash Mountain at Disneyland Park in Anaheim, California is an American rite of passage. It’s one of the most commonly referenced theme park rides in the country, and it’s absolutely earned its place as a household name. Not everybody “does” water rides, so make sure you don’t have any spoilsports in your crowd before heading out (unless they like sitting on the side with everybody’s bags).

We should note that the ride isn’t without its problems, historically speaking. There are some questionable motifs displayed as there is a misguided presentation of African folklore. Rumor has it a recent overhaul has done away with the images.

Most television and movie-based theme parks are heading in a new direction, toward on-screen experiences. Rides like Splash Mountain probably won’t be around forever. 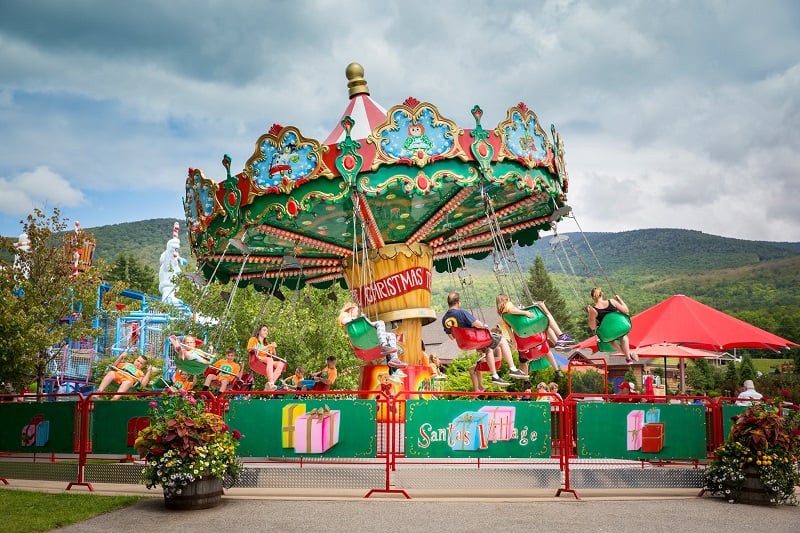 Christmas-themed amusement parks have largely been replaced by similar events in the pop-up format. In Jefferson, New Hampshire, Santa’s Village continues to thrive regardless of the trend. The park is more on the family side, but it could be a fun way to celebrate Christmas in July!

The Christmas-flavored snacks and exciting rides and stops make the park a fun way to spend a couple of hours. The 23 rides are clever homages to Santa himself (i.e., The Great Humbug Adventure”). These rides are for children, so bring your kids or nieces/nephews!

Visitors of all ages can grab a personalized item at Fezziwig’s Personalization Shop, especially if you’ve been hoping to stock up on gifts for your loved ones (or yourself) before the holiday rush kicks in.

8. Dollywood Offers Something Off the Beaten Path in Pigeon Forge, Tennessee 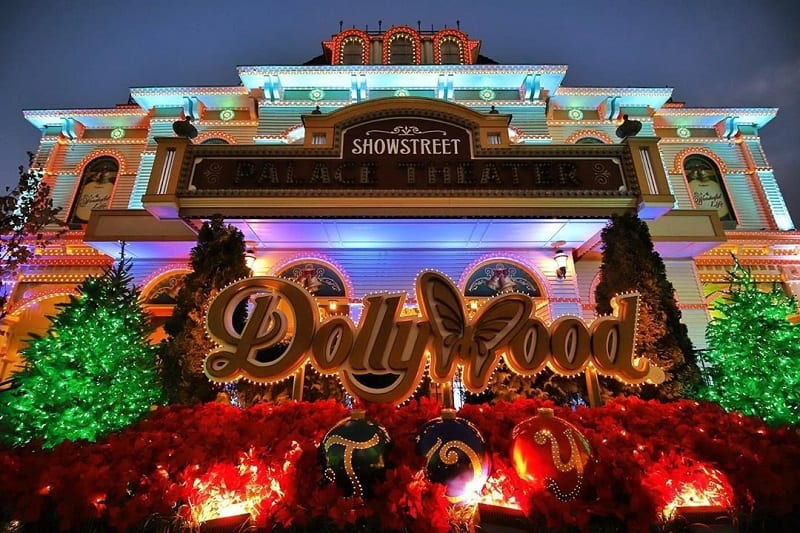 Dolly Parton is an icon who keeps making a comeback every time a new generation of music fans falls in love with “Jolene” and “9 to 5.” With such buzz always popping up, it is no wonder that there would be a land dedicated to her songs and style.

In the heart of the Great Smoky Mountains of Tennessee, Dolly Parton is the partial owner of an amusement park named in her honor. The hotspot offers rides, attractions, music, and comfort food. It’s dubbed fun for the whole family, so everybody’s bound to find something they’ll enjoy.

Recommended ride: Try the Dollywood Express, a 110 ton coal-powered engine that takes riders on a 20 minute (five miles) tour of the mountainside. 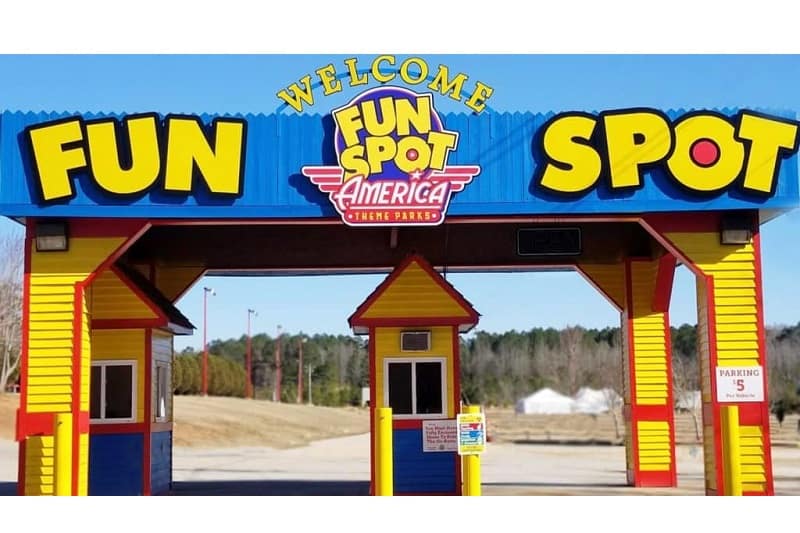 There’s another type of theme park that shouldn’t be left off the list: smaller, local venues. These are the nearby places that make birthday parties, school trips, and first dates some of our fondest memories thanks to laser tag, mini-golf, bumper cars, bowling, and arcade games.

Some are bigger than others, advertising water parks, kart racing, and Ferris wheels. A classic example that comes to mind is one featured in Cobra Kai on Netflix – Golf N’ Stuff. It’s not the one from the original Karate Kid, but it’s close and was featured on the spinoff program, so it’s still worth the visit in our book, especially if you are into the retro movement.

This location finds itself in Georgia, so it could be a worthwhile spot if you’re in the area. The location offers rides, go-karts, and video games. A lot of people come for these but stay for the minigolf! 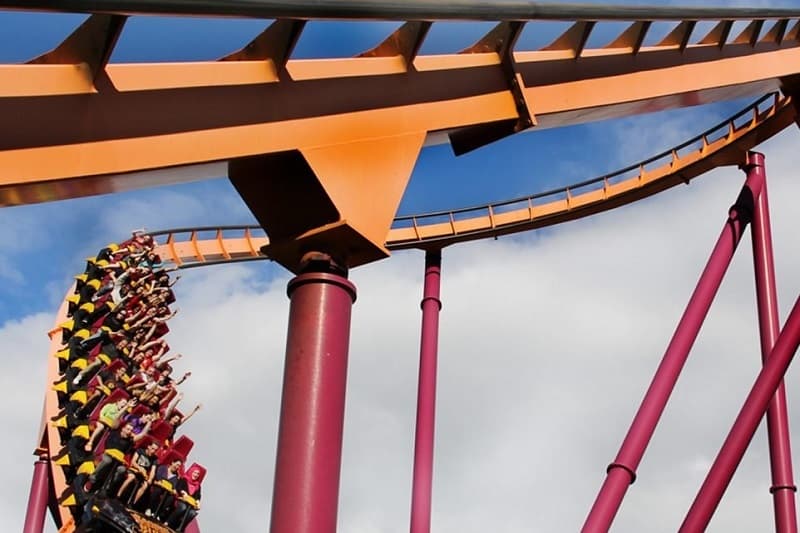 Six Flags has locations across the United States and Mexico, so if Gurnee, IL, is too far for you, you can research options near you, making it a fun travel experience no matter where you land.

In Chicagoland, a fun summer day often starts with one question: Do you want to go to Six Flags and ride the Raging Bull? Everybody with a season pass is sure to be down, and a few other friends are likely to tag along.

This 202 feet (twenty stories) beast tops the chart at 73 mph, holding the crown for the park’s biggest and fastest ride. The course drops through some dark areas and gives visitors a ride they won’t soon forget as they rush through six horizontal loops. Bring your swimsuits because the water park next door is worth a trip, especially if you want to hit up the FlowRider, a surf simulator.

Pro tip: If the FlowRider sounds like your idea of a main attraction, check out this local option about an hour from Six Flags in Glendale Heights, IL.

The most important part of trip planning, especially when heading to an amusement park or theme park, is getting a good value out of the prices as they’re usually high. The best way to avoid endless lines, high costs, and long drives are to keep it local.

On the other hand, some people have large budgets for amusement and theme park vacations. If that’s your case, don’t rule out the big names! They’ve got plenty to offer.

The post The 10 Best Theme Parks To Visit in America appeared first on Next Luxury.