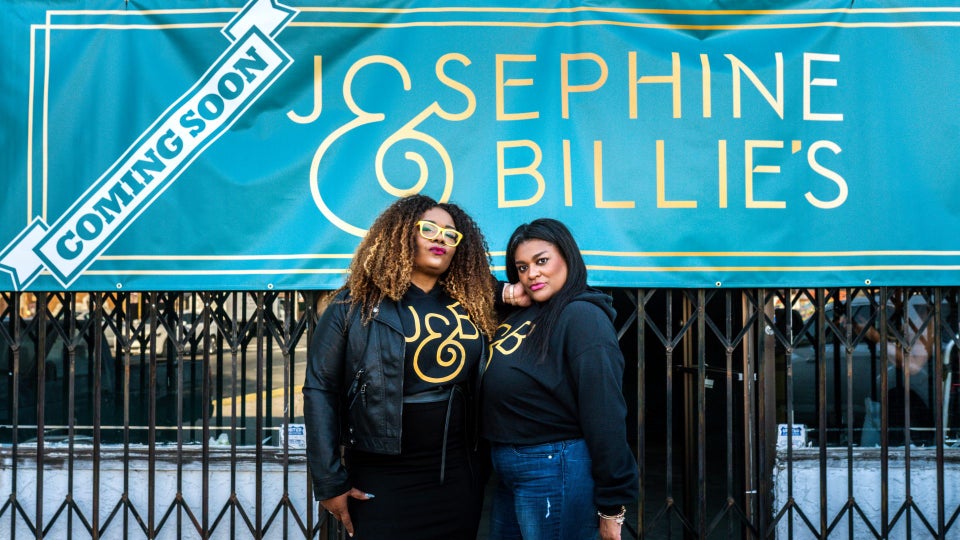 It’s no secret that the cannabis industry has a diversity problem.

As of 2020, most cannabis businesses were run almost exclusively by white men, while retailers, dispensaries and pharmacies nationwide are expected to take in nearly $45 billion in revenue by 2024.

Thankfully, Whitney Beatty and Ebony Andersen are here to claim their stake of the pie.

Founded and led by Black women, Josephine & Billie’s was developed to create a welcoming and educational retail experience for women of color and to fill a void existing for this demographic within the L.A. marketplace. As the first of its kind in the United States, Josephine and Billie’s will offer a unique speakeasy-style cannabis retail concept inspired by the jazz age, taking consumers back to the ‘tea pads’ that existed in Black communities in the 20s and 30s.

In an interview with ESSENCE, Beatty and Andersen discuss their new partnership with TPCO & Jay Z, the inspiration behind Josephine & Billies and how they hope to help other Black women break into cannabis.

What inspired Josephine & Billies?Beatty: The inspiration for Josephine and Billie’s came from my own experience with cannabis. I don’t have a typical cannabis story. I didn’t use cannabis growing up because Nancy Reagan told me to “Say no to drugs” and I believed her. Fast forward to adulthood, my doctor suggested cannabis as a way to control my anxiety. She may as well be referring me to try something as drastic as meth. But, it forced me to do my homework and learn about the plant and really question why there is so much stigma around it.

Here’s what I learned: the cannabis plant has been an integral part of our culture’s healing for decades. From the Tea Pads of the early 20’s until today, People of Color have been relying on plant medicine — and we were largely demonized for it. Harry Anslinger regularly conflated drug use, race, and music to the detriment of our communities. He said,  “Reefer makes darkies think they’re as good as white men.” That statement makes my blood boil. Communities that were over-policed during the War on Drugs still feel the ramifications of this policy, without seeing the benefits of the cannabis plant and its legalization.

Andersen: The research around this is compelling. Studies show that Women of Color (WOC) benefit the most from the effects of cannabis (which includes CBD). Women also experience anxiety at twice the rate compared to men. Furthermore, anxiety is chronic and more intense for Black women compared to other groups. Communities of Color were disproportionately affected by the War on Drugs and many of us feel apprehension, and have little experience using cannabis because of that.

Beatty: That one suggestion from my doctor to explore cannabis as medicine sparked my research. Once I began to really connect the dots, it was clear what the next step was: to build a space for Women of Color where we could learn about plant medicine in a safe and communal environment.

Our brand pays homage to the spirits of Billie Holiday and Josephine Baker –  even though they were persecuted for their cannabis consumption, they used their art to fight against injustice, constantly pushed boundaries, and wrote their OWN rules — all while making sure to hold the door open for others who would come after. That is #goalsAF.

How do you hope to change this for other women of color who want to break into cannabis?

Andersen: We’re hopeful that Josephine & Billie’s brings attention to Black and Brown-owned businesses in the cannabis space that have yet to raise capital and compete in the market. Investing in Black-owned businesses isn’t charity. Our businesses are equally qualified for funding.  We have done the work and often have unique product offerings tailored to our communities.

Beatty: I also serve as Vice President of Supernova Women, a 501c3 that seeks to encourage Women of Color to become stakeholders in the space. We recently launched the country’s first Cannabis Social Equity Workforce Development Program in partnership with the City of Oakland at the EquityWorks! Incubator Training Center. Programs like these — that prepare people for the cannabis workforce — are critical to a diverse and inclusive cannabis industry.

What does the partnership with TPCO & Jay Z mean for your business?

Beatty: This partnership is a game changer for us. Not only does it allow us to have the capital necessary to open up our store and build the Josephine and Billie’s community, it also allows us to create opportunities for other Black and Brown cannabis cultivators and manufacturers along the supply chain. The Parent Company (TPCO), where Jay-Z serves as the Chief Visionary Officer, is an ideal partner, because they are an omnichannel cannabis company. It gives us business development opportunities that would otherwise be out of reach for a startup of our size.

Andersen: The investment also allows us to demonstrate that women of color have been unfairly ignored by this industry for far too long.  We deserve funding consideration and products and services designed for us, by us.  Josephine and Billie’s provides a proof of concept for what some may argue is a radical model — WOC creating businesses that support and uplift WOC.  Having a major player like TPCO support our efforts, sets a precedent for others in the industry.  We are honored to be a part of this moment.

How much are you fundraising? How can readers support?

Beatty: We still have some funds to raise — but we’re hopeful to get it closed in the next month. Support from our community is critical! We appreciate every like and follow we get on Instagram.

Andersen: We want readers to support us by connecting with us on social media and visiting Josephine and Billie’s flagship location and sharing their experience with others.  We want WOC to know there is a community in cannabis for them where they are valued and celebrated.

The post These Founders Are Creating The First Cannabis Speakeasy By and For Women of Color Thanks To A Boost From Jay Z appeared first on Essence.