Experts say lesser-resourced campuses, especially some historically Black universities and colleges (HBCUs), can tap into their potential to compete for these students — and the millions of dollars in federal tuition assistance that follows them — by honing their virtual delivery models. 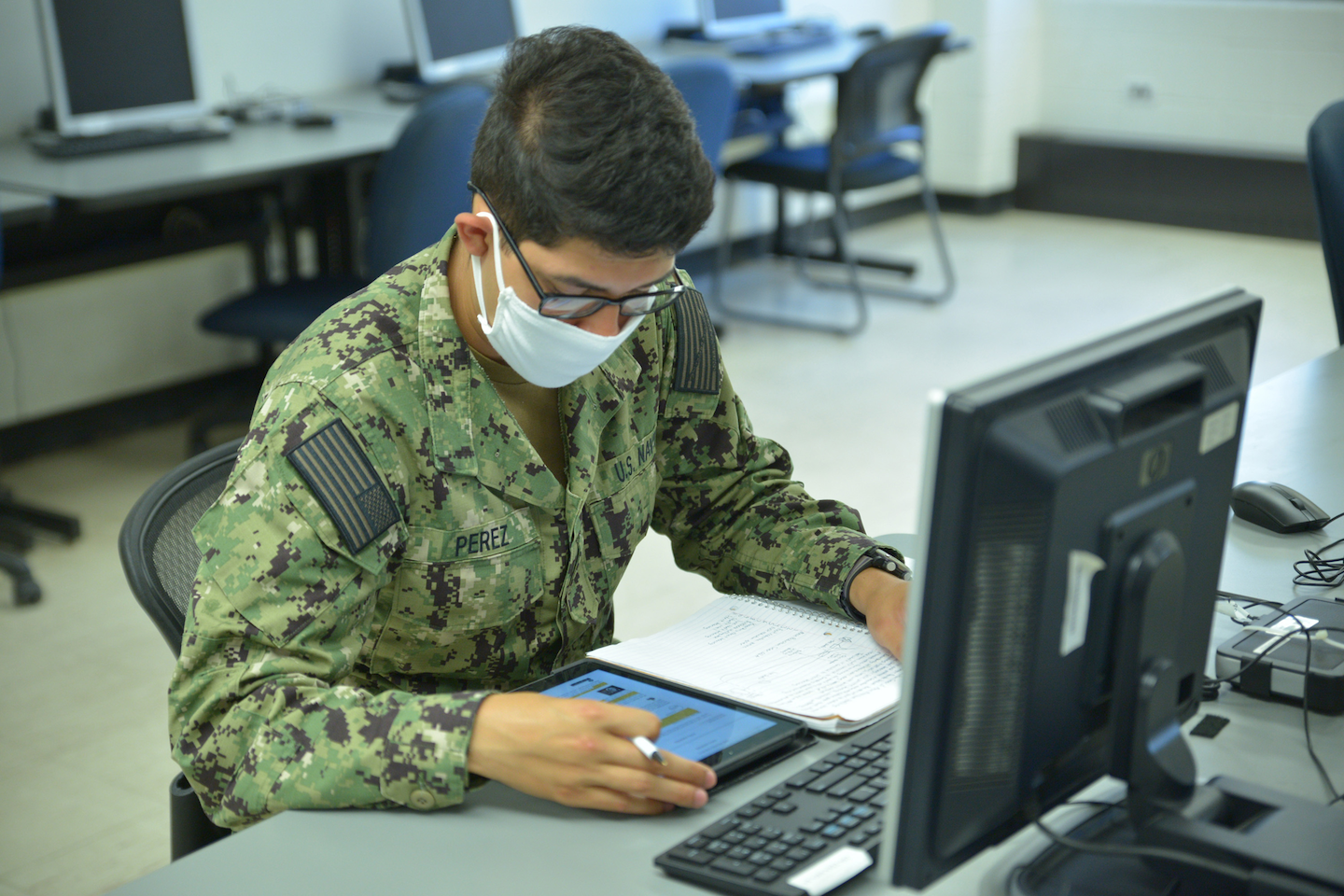 A sailor studies in the interactive courseware classroom to successfully pass Basic Engineering Common Core's at the Surface Warfare Engineering School Command.“Flexibility is key for military students because they can be called anytime,” says Janice Neal, regional director of Webster University’s western military campuses and director of the Los Angeles Air Force Base campus. “They could be in the middle of class or even an exam and need to fly out in 30 minutes. They’ve even brought luggage to class. So, we learned to adapt.”

Webster University is one of several institutions intentionally reaching out to active-duty service members who want to go to school. For more than 40 years, Webster has provided military education through virtual, hybrid and in-person courses. Neal noted that an all-online transition in the pandemic was fairly straightforward for Webster because of its history educating military students.

Money on the table

Each year, the federal government’s Department of Defense (DoD) pays almost $500 million in tuition assistance for service members to attend qualifying institutions. Such service members include those in the Air Force, Army, Navy and Marine Corps. In fiscal year 2020, military tuition assistance totaled more than $487 million for more than 236,000 participants in about 690,000 courses, according to DoD public data.

But to be eligible to receive the federal disbursements, institutions need to follow the DoD’s Memorandum of Understanding (MOU) for a military-friendly campus.

“Do they accept a transfer of credit? Have they worked out a coalition between degrees and military jobs?” asks Vernon Hood Taylor, the president of Workforce Training and Education Alliance, which aims to bridge industries, training and schooling.  “How many people on staff speak a military language? If I say M-O-S, that’s military occupation skills. Someone on campus needs to know that. The environment must be conducive to competing.”

Taylor was director of lifelong learning for the U.S. Marine Corps for more than 15 years, and he was associate vice president for military programs at National University for nearly a decade. Over his career, Taylor has seen the growing importance of developing military-friendly virtual campuses. 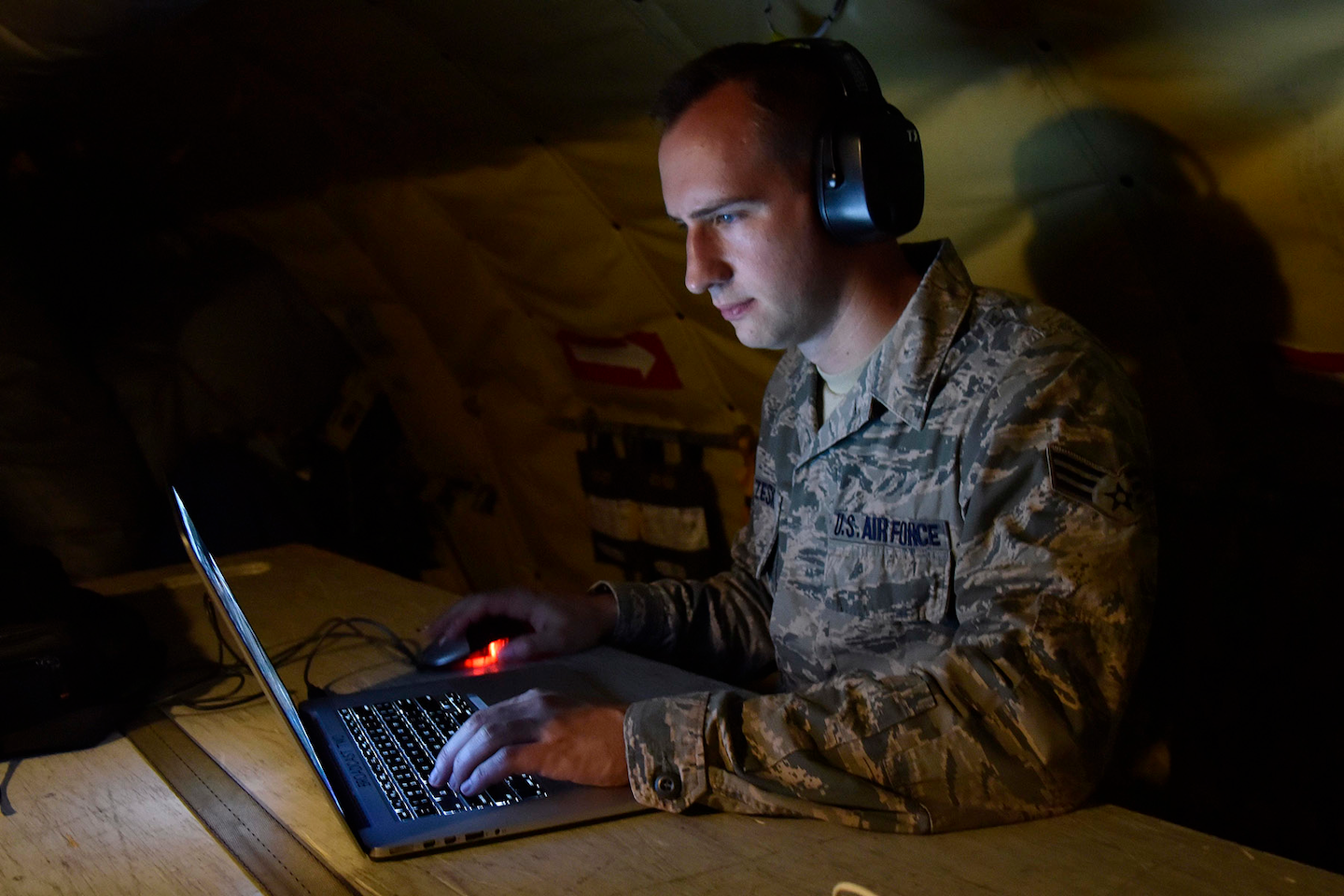 Senior Airman Ryan Zeski uses time during a long flight to work on some homework for a course
he is taking at Oakland University.

About 15 years ago, around three quarters of the military enrollment in educational programs were in traditional classrooms, with a quarter in virtual ones. Almost the reverse is true today.

More than 1,000 institutions are listed in the MOU, yet a handful receive the biggest chunks of funding, due to the highest student demand. Taylor says more institutions aren’t competing for these students because there’s “a lack of knowledge, period.”

Many universities were unaware for years of the millions of dollars a year that comes with serving military students, Taylor notes. Additionally, Taylor says academia has long held negative connotations around virtual education. Military education programs, which were often virtual because of their highly mobile students, have been largely overlooked and untapped.

“Distance learning was perceived as inadequate,” Taylor says. “So for HBCUs ten years ago, most didn’t have their act together around distance learning. Most never had enough interest in going after the military population as well. There was not enough incentive.”

Taylor’s next ambition is to build a consortium of HBCUs offering virtual education programs to people in the military.

“As a minority in charge of many of these military educational services for almost 20 years, it irritated me when I couldn’t get HBCUs involved,” he continues.  “It’s always been something I’ve desired. I’ve never been in a position where I can focus on it until now.”

He sees such partnerships as ripe chances to serve those who serve the country.

“You have to also recall that HBCUs did not have a positive image in higher education for years. Beyond minority communities, they were not looked at as a national option for individuals until recently,” says Taylor, who partially credits a changing perception of HBCUs with a renewed interest in educating military members online.

Credit for prior training

To him, any institution has a chance at better competing once military experience is connected clearly to degree and certificate programs.

“If you’re going for a nursing program, for instance, what jobs in the military services relate to that degree, how many people are in those jobs and what is their training like?” Taylor asks. “People want to apply their relevant experience to get halfway through a nursing degree rather than start over.”

With shifting industry expectations of graduates, the DoD in recent years also started tuition assistance for vocational training, such as in a program called SkillBridge. Institutions like National University work with SkillBridge to build industry-education-military relationships.

“Our goal is to ensure that once a service member gets out of service, they have the credentials to land a job,” says Desiree Butts, the executive director for Military and Veterans Association programs at National University. “We used to focus on just wanting you to graduate. But now we want to take you from graduation to employment — or else we haven’t done our due diligence.”

To Butts, SkillBridge and related programs could be the way of the future.

“We’ve trained our military to be very disciplined, but that didn’t always translate into civilian programs. You can’t just get a degree and that be it. It’s about the connections you make with the people in the industry,” says Butts. “SkillBridge programs are helping us with that.”

“Our military students do not want to go backwards to move forward,” she says. “They have years of knowledge, and we want to slide those years in for the equivalent credit. I hope this will happen more, because I see it as a disservice to our students otherwise.”

Like Taylor, Butts noted that HBCUs could be strong players in teaching service members.

“The HBCU experience usually involves football games, homecoming, band culture, all these traditions that you share on campus,” says Butts. “I think HBCUs could still have that campus life while opening up a virtual community to ensure they’re not closing some military people off.”

Justus Jones, an undergraduate at North Carolina Agricultural and Technical State University and a member of the Army Reserve Officers’ Training Corps sees these institutions as offering a special place for those in the military.

“HBCUs can provide another outlook for people on active duty, giving a more welcoming feel for a lot of minority military students, especially because they know where they’re coming from,” says Jones. “I also know a lot of people who are in school and in the military but keep that a little quiet. I’d like to see more of a celebration of them.”

To Neal, seeing more institutions strengthening their offerings in the virtual space to better serve military students is exciting.

“My hat is off to all of those institutions providing resources so that our military students can complete their goals,” he says. “You really need the commitment and fortitude to take that step to get that degree or certificate. It is not an easy process. I believe that we in higher education should be — and are — serving those who served us.”

This article originally appeared in the September 9, 2021 edition of Diverse. Read it here.