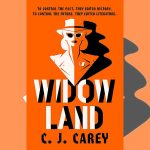 There are few books I like more than a dystopian counterfactual. Novels that are based in the real world but depict events that did not happen. Events that are then blended with an Orwellian vision of a world gone wrong. Widowland by C.J. Carey, imagines that Germany and Great Britain did not go to war in 1939. Instead, an alliance was formed. Britain becomes a vassal state, Germany rules Europe with an iron first, and everything is very bleak indeed. Against this backdrop stands Rose; an upstanding British citizen and a cog in the machine. It is Rose’s job to edit literature. The pen is mightier than the sword and the Nazis want to control everything, right down to the words of the classics.

What is Widowland by C.J. Carey?

Widowland is set in the 1950s. The Alliance has been formed for well over ten years. The Nazis rule by fear and control, led by Alfred Rosenberg. Society has been stratified, women are subservient to men and have been segregated into a caste system. The novel’s protagonist, Rose is a “Geli,” the top-tier caste. She has a government job in the Ministry of Culture. She has been awarded the job of examining classic works of literature and rewriting them to remove signs of degeneracy, making them more in keeping with the ideals of “The Leader.”

As the novel opens, Edward VIII has been returned to the throne after the rest of the Royal Family “disappeared.” He is married to Wallis Simpson, and as our story begins, his coronation is but a few weeks away. Against this background of mounting excitement, acts of terrorism are being perpetrated in Britain’s cities. Somebody is scrawling degenerate graffiti on the walls of libraries and other educational establishments. Rose is given the secret task of discovering who is responsible. A task that will take her into the forgotten areas of the nation. Into the Widowland.

Why Read Widowland by C.J. Carey?

The purpose of dystopian novels is usually to make you think about the wider world around you, and so it is with Widowland. There are two main prongs to the novel. The first shows how easy it is to divide and subjugate society. The much-vaunted “Blitz spirit” of the British is more or less completely missing from the public in Widowland. Propaganda and manipulation have been used to undermine society, stratifying it, so that those at the top are very happy with the status quo.

One of the terrifying things about this novel is that in the light of the divisive and polarized populist politics that we have seen on both sides of the Atlantic, this sort of divide and conquer feels all too plausible. We’d like to think that “It couldn’t happen here,” but reading Widowland one can’t help but feel unsettled that it would probably be all too easy.

The other prong concerns the treatment of women and the elderly by society, and in particular older women. One of the central tenets of the regime is that women should produce as many children as possible in order to further propagate the Reich. Those who are now too old to have children, especially if they had none, are cast aside. Female society is organized by caste, with the childless and the elderly living at the bottom. They essentially live in ghettos, forgotten about by the more “useful’ elements of society. These no-go areas are called the “Widowland.”

The graffiti scrawled on the walls has one common theme. It is all quotes from famous works of literature. Usually, literature written by women. Literature that is either banned or on Rose’s list for editing. This throws up interesting questions about the power and the role of literature in a functional society. Again, this dovetails with modern politics and the apparent inability of much of society to think critically about the information they are given.

Needless to say, as the novel progresses, Rose discovers things about herself and the regime that were hitherto hidden. As she is captivated by the books she is meant to have excised, she also becomes drawn into a ring of charismatic women who live in the Widowland. As the coronation day gets ever closer, Widowland makes good on its billing as a thriller. Rose finds herself compelled to do something, anything, to throw off the yoke of oppression and the last 100 pages are taut, bleak, and breathtaking in equal measure.

I found Widowland a little slow in the middle, but the first and last thirds hugely entertaining. I loved the world-building of the opening third. This is a novel much more in the 1984 mold of dystopias than The Hunger Games. Widowland is a credible extension of what Britain could have become if circumstances in the 1940s were slightly altered. I think it is also a warning of a path the country might start down if the divide and conqueror rhetoric of leading politicians isn’t brought to heel. The idea that Britain is somehow superior to the rest of the world has led us to where we are in 2021, and similar propaganda is used in Widowland to persecute those who don’t conform.

In spite of, or perhaps because of, its dark tones, Widowland is also a wonderful pean to the power of literature. If you’re a book lover, you’ll love Widowland, as it’s full of references to classic novels as well as being an examination of the power of the written word. All in all, Widowland is an excellent addition to the dystopian canon.

You can pick up a copy of Widowland, here in the US and here, in the UK.

If you enjoyed this review, check out more book reviews, here!

Disclosure: I received a copy of this book in order to write this review.

Click through to read all of "‘Widowland’ by C.J. Carey: A Book Review" at GeekDad.If you value content from GeekDad, please support us via Patreon or use this link to shop at Amazon. Thanks!