Beadboard and a Beetle Bug!

by admin February 13, 2020
Now that our kitchen cabinets are finished with their painting... we changed them from brown to white, it was time to dress them up a little bit.

The old sturdy solid cabinets are wonderful in this kitchen. But we decided to dress up the ends of them with the beadboard panels to match the beadboard sides of the island.

We carefully measured the existing beadboard on each side of the island. 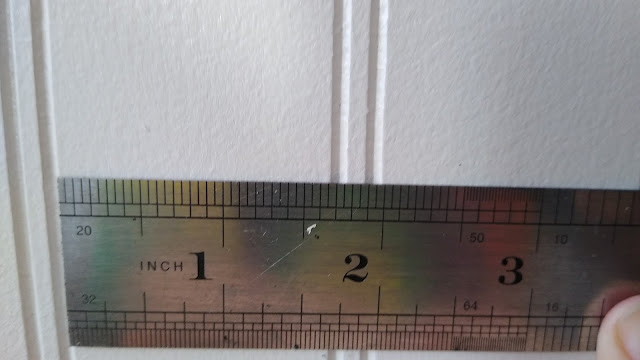 We realized the beadboard choices at the store are all different thicknesses and depth of the grooves. Some of it is just white MDF paneling, other panels are sheets of wooden beadboard, and some are thick beadboard planks instead of panels.

We picked up a 4 x 8 sheet of primed wood paneling that matches the island beadboard from Home Depot, for just under $20. We hauled it home the same day we hauled home the roll of bathroom vinyl flooring that we will save for another project day... 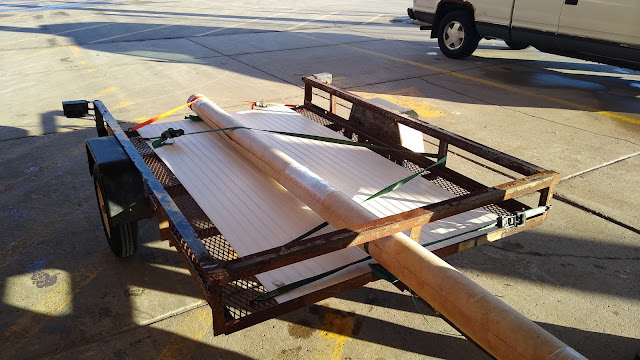 Now for the Beetle Bug part...

No, we didn't find any beetle bugs in the woods of the cabinets. LOL. We just found a little three-year-old Beetle Bug named Claire who wanted to come over and help us today.

I grabbed the clipboard and the pencil to take down the measurements. Grandpa had his big tape measure and the Little Beetle Bug had to have her tape measure too. 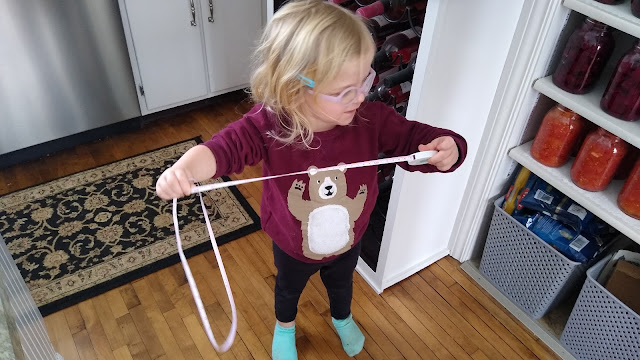 She measured and measured,
and called out numbers to me
to write down for her. 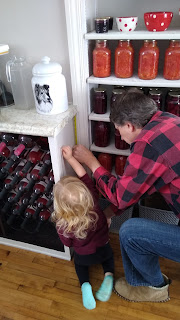 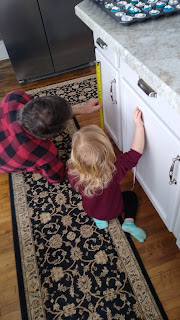 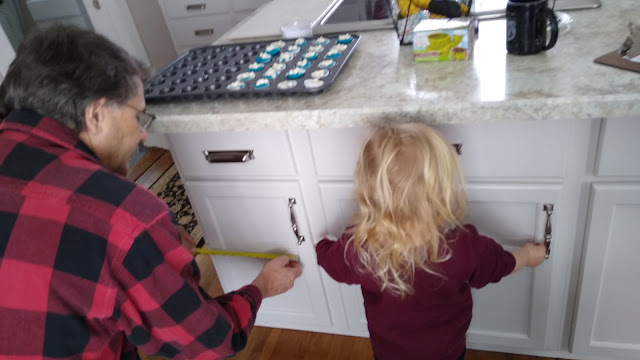 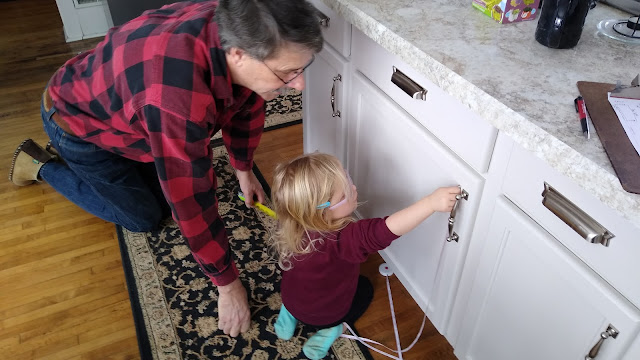 While Claire and I laid down to take a nap in the afternoon, Grandpa took care of cutting up some of the panels.

Once naptime was over, he brought in the big air compressor into the she shed, and then he ran the air hose up the stairs into the house.

He ran thick beads of construction adhesive around on the back sides of the panels. 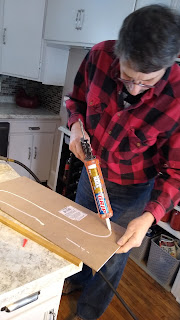 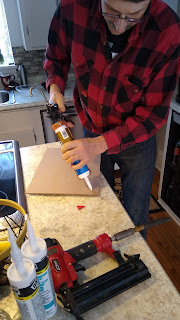 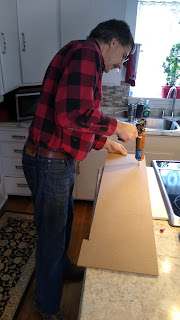 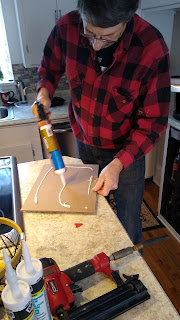 He nailed the panels into place with the air nail gun. He added a few trim strips here and there as well, to balance it off and match the other cabinetry. 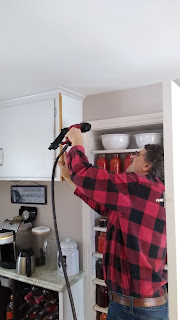 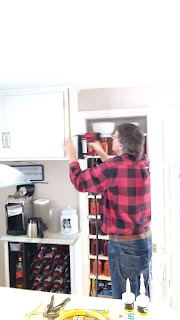 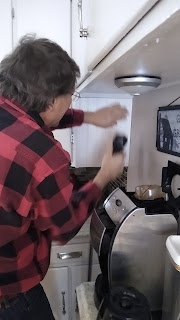 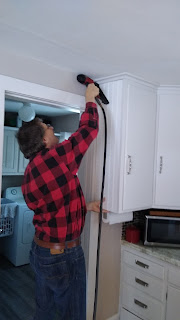 We really like how this is coming out!
Before supper, I managed to get the first coat of paint on some of the panels. Grandpa kept the wee one entertained while I could get out a paint brush and roller to see how the finished panels were going to look. 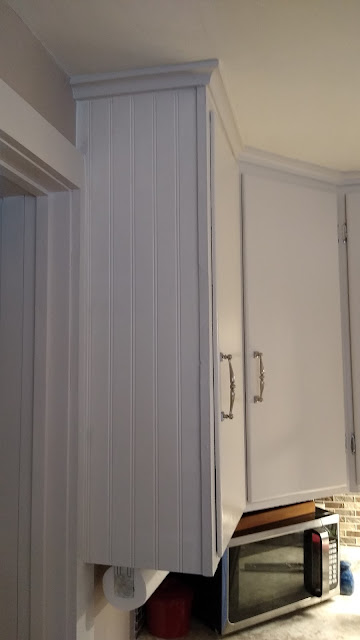 He did the side of the cabinet
that meets up against the open pantry,
and a small square alongside the
longer cabinet in the corner. 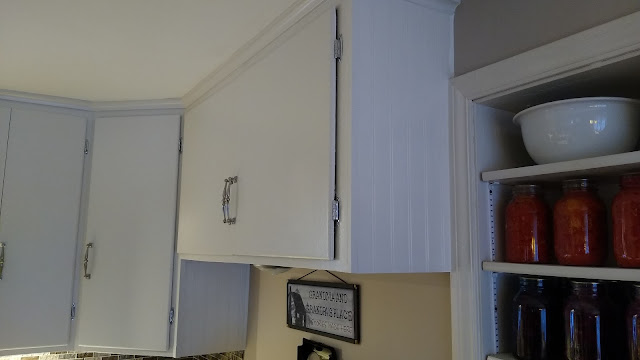 The side of my coffee bar / wine rack got a new panel too. This is located closest to the island and looks nice now that it matches! 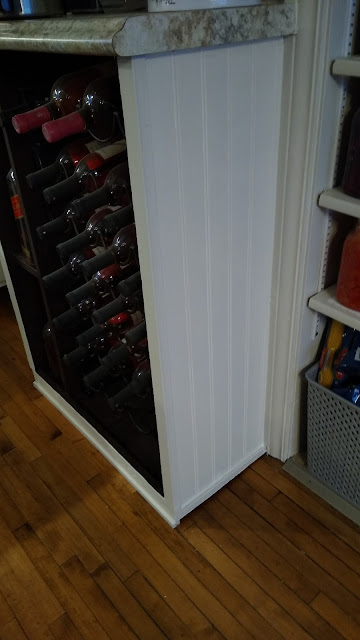 He has a few more pieces to cut yet. He is doing three small panels for each of the doors on the island as well as a panel on each side of the upper cabinets that surround the center window.

It will be nine panels in total. If there's enough left, there are two tall skinny doors on the backside of the island with our trash and recycling pull out bins that I would like to get covered as well ... if he can eek them out of the remaining pieces.

~~~~~~~~~
It's time now to finish up this blog. The Beetle Bug helped me cook supper and now it's time to pop her in the bathtub before popping her into bed. The dogs sure enjoy cuddling with her and watching for any dropped crumbs from her graham cracker snack. 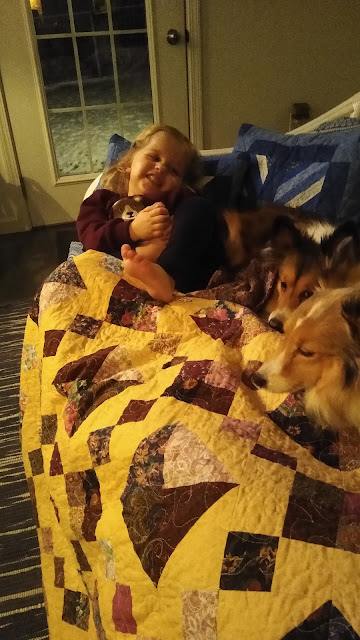 Here she is saying "Goodnight Moon"! 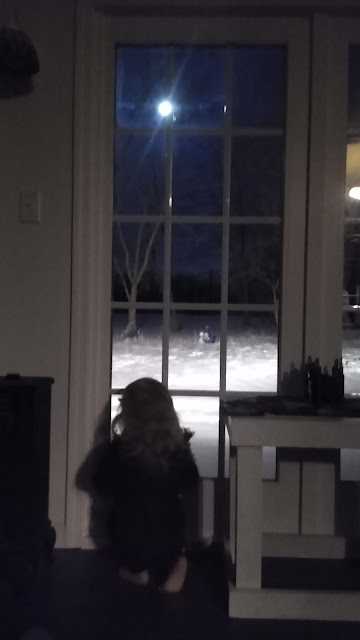 
Continued prayers are appreciated for our family members that are going through a rough time with health issues right now. That is all I can manage to say at this time.
Back to News
Use left/right arrows to navigate the slideshow or swipe left/right if using a mobile device