Even the Kitchen Island in This L.A. Artist’s Home Is Covered in Her Signature Waves

“I don’t really do the work-life balance thing,” says Hannah Polskin. The multidisciplinary artist and designer, who is probably best known for her black and white diptychs and triptychs, creates, sleeps, eats, and entertains all out of one place: her West Hollywood apartment. For her, there’s never been any other way. Polskin will be half done with a piece and hang it over her credenza or in her kitchen to get a feel for how it vibes with the other objects around it. “The home setting is so important to me,” she continues. “Hats off to artists who can step away from things and get the answers they need. I need to just drench my eyeballs in it.”

Polskin specifically chose this space because of her art. At the beginning of the pandemic, she wanted to start experimenting with large-scale pieces—even bigger than her standard 6-by-4-feet works. The thing was, her former place was so small she’d often have to move some of her furniture out into the complex’s hallway just to give herself enough room to paint. When she mentioned this to a collector who also happened to be in real estate, she learned about the spacious, airy loft with 17-foot-high “blank walls for days.” “It really allowed me to explore new dimensions. It’s why I’m so emotional about this place,” shares Polskin.

There are few items in Polskin’s home that aren’t her own creations. And while it’s mostly stuff she’ll eventually sell (the space doubles as a personal gallery, where clients can come over and view everything IRL), there are a couple of permanent installations that are just for her. “Living where I worked pushed me into furniture,” says Polskin. Before, the single-wall kitchen was a vast space. Polskin hit up her local lumberyard for some Baltic birch plywood and constructed a Donald Judd–esque structure to go in the middle of the open area. Her signature undulating lines run across its surface, which is coated in a food-safe resin that gives the exposed wood parts a golden glow. “It’s so sublime,” she adds.

The tricky part, surprisingly, was finding barstools that didn’t detract from the statement moment. Polskin scored three Arthur Umanoff seats through OfferUp, except they were all different heights. “The next thing was to get an angle grinder and shave down the legs,” she remembers.

Luckily, Polskin has a private garage area outside that acts as a woodshop. It’s where she tackles her biggest commissions and intricate carvings. It’s also “scraptopia,” as she jokes (prototype parts, many of them edges for her amorphous mirrors, line the walls). “Some of the shapes continue to inspire me, so I’ll keep them around,” she says. Her bedroom overlooks the area, so “I’m really never not in my work,” she attests.

The artist took a break from her electric saw when she set out to create her “headboard.” “I’d never done a mural, and it was super-challenging,” recalls Polskin. (Usually, she’s painting on a flat surface on the ground, so having gravity go against her was a totally new experience.) Wrapping the design around the adjacent walls makes the sleeping spot feel more cocoon-like.

These organic, wavy shapes are a constant in Polskin’s work (even her menorahs follow suit), and she has been making them ever since she could draw as a kid. “It’s always been in my DNA,” she explains. She’s not quite sure what their free-flowing quality means, but the act of creating them is liberating. “It makes me feel like I’m taking care of myself,” she says. “There’s something almost addictive in them.”

While the artist won’t be giving up her style anytime soon, she is excited to work with new materials. Recently she started using burl, what she calls the “caviar of wood.” (The variety is essentially taken out of the core of the tree and gets its unique knots from having endured some level of trauma.) “If there’s ever a fire, I’m going in for the burl,” she says with a laugh. “It’s too beautiful.” A recent trip to the Venice Biennale with her mom got Polskin amped to begin playing with not-so-good-looking woods. “I saw so many water-soaked, old woods,” she says. The antique cheese board in her kitchen that’s super-distressed and cracked will be her guinea pig canvas (she plans to paint on it soon).

In the near future, Polskin hopes to translate her designs onto stone and metal. She got a bit familiar with the latter when she fell in need of a TV-hiding solution (she hated seeing a black box hanging in the middle of the wall in her living room space). So she built a cabinet out of aluminum to go around it, but when she came down with COVID and ended up parked on her sofa for 10 days, she had an uh-oh moment: The door hardware blocked the remote signal. “Every time I wanted to change the channel, I had to stand up,” she says. Hey, it’s a work in progress. 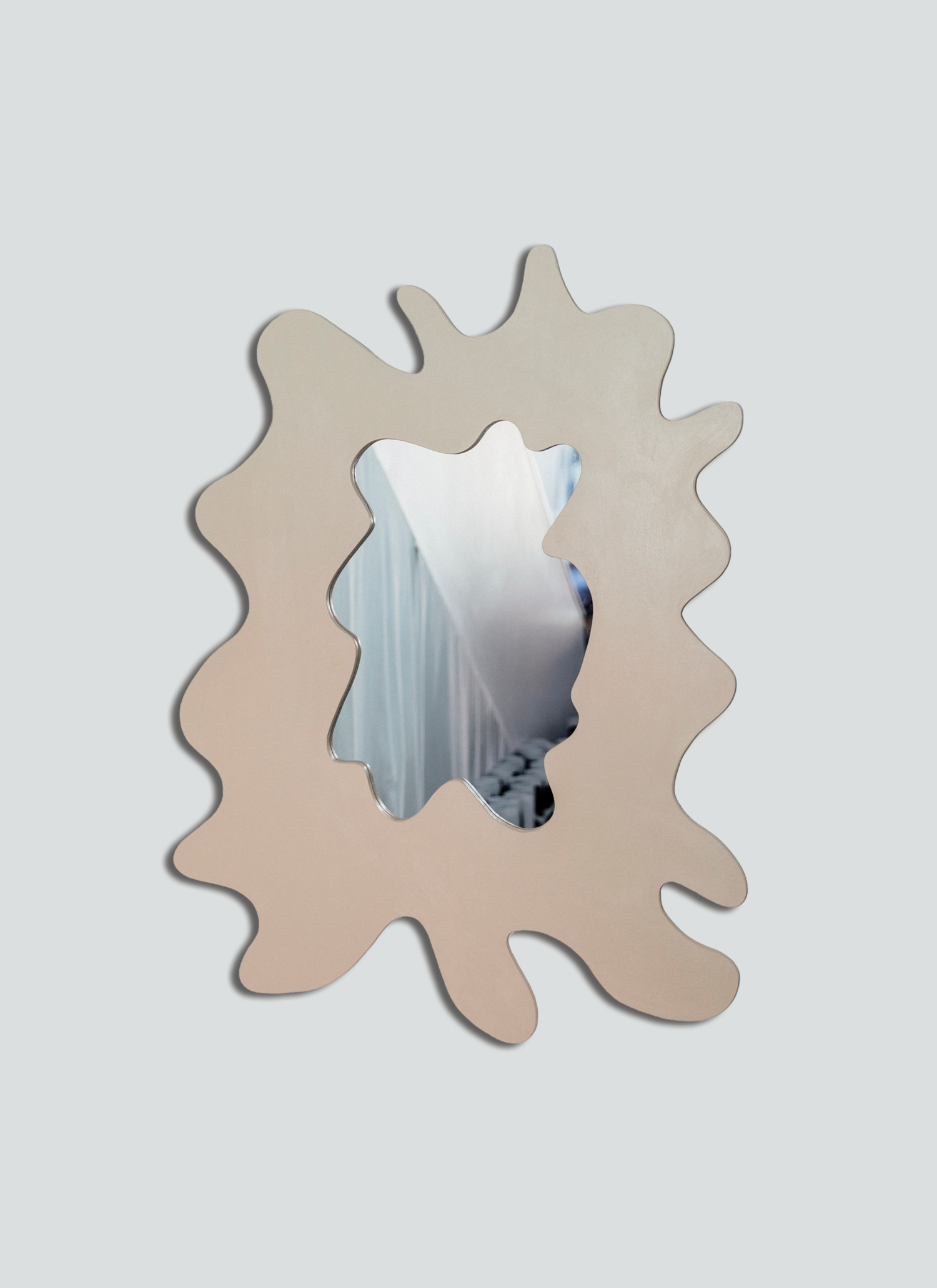 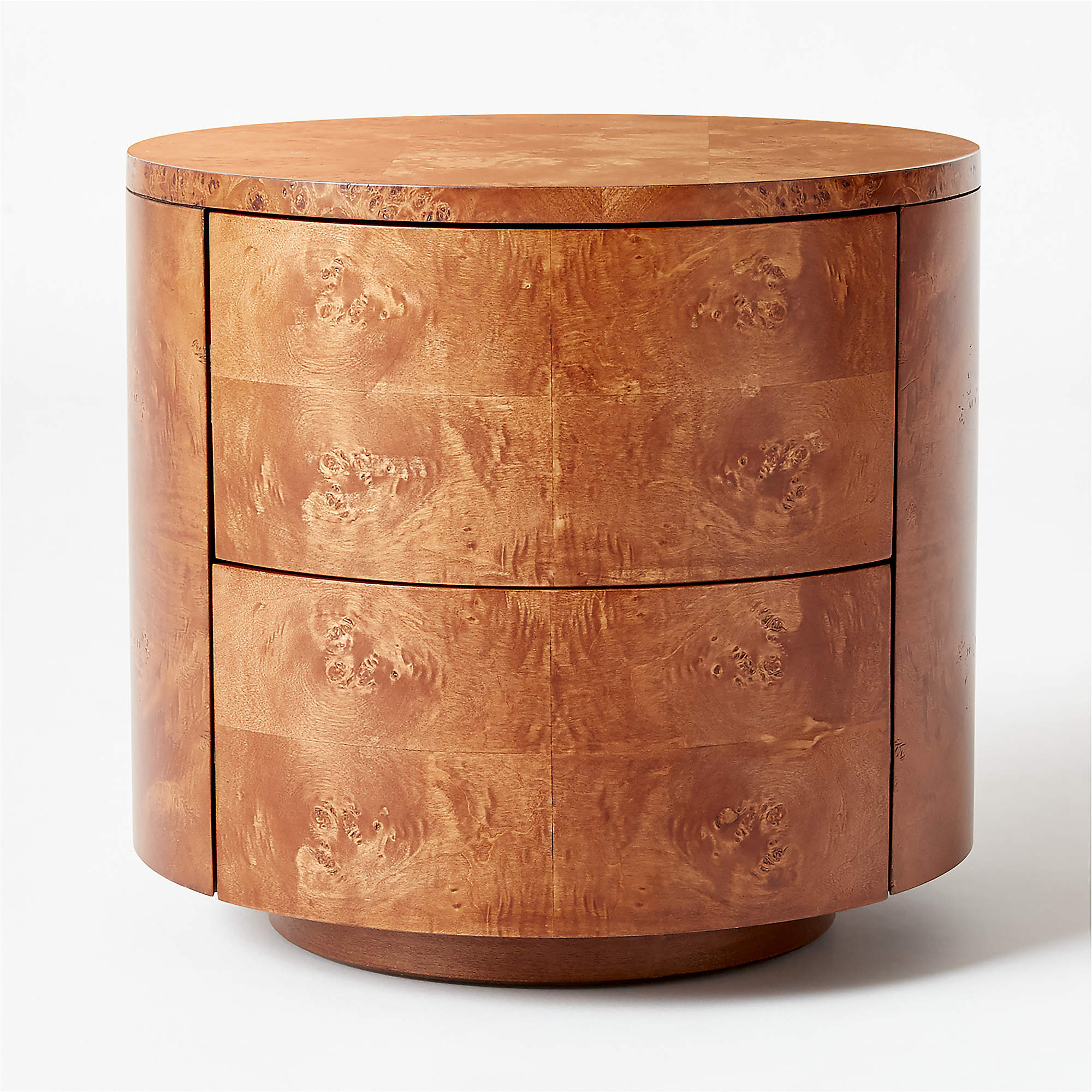 Go-to local vintage shop: @shopNFS is an account I love for the most bizarre finds. This is where I scored the rusted metal side table next to my sofa. I’m obsessed with this shade of brown right now.

Where I thrift: Santa Monica Airport Flea is a favorite.

Biggest splurge: My burl art is one of the spendier things in my home. For special projects, I’ll splurge on a magnificent piece with really rich visual interest, but painting on this wood is a high-stakes poker game. I always have about one in my possession, and living with them before they go to a collector is such a treat.

Biggest save: There was a lot of blood, sweat, and tears that went into the island and adjusting the Arthur Umanoff stools.

The post Even the Kitchen Island in This L.A. Artist’s Home Is Covered in Her Signature Waves appeared first on domino.