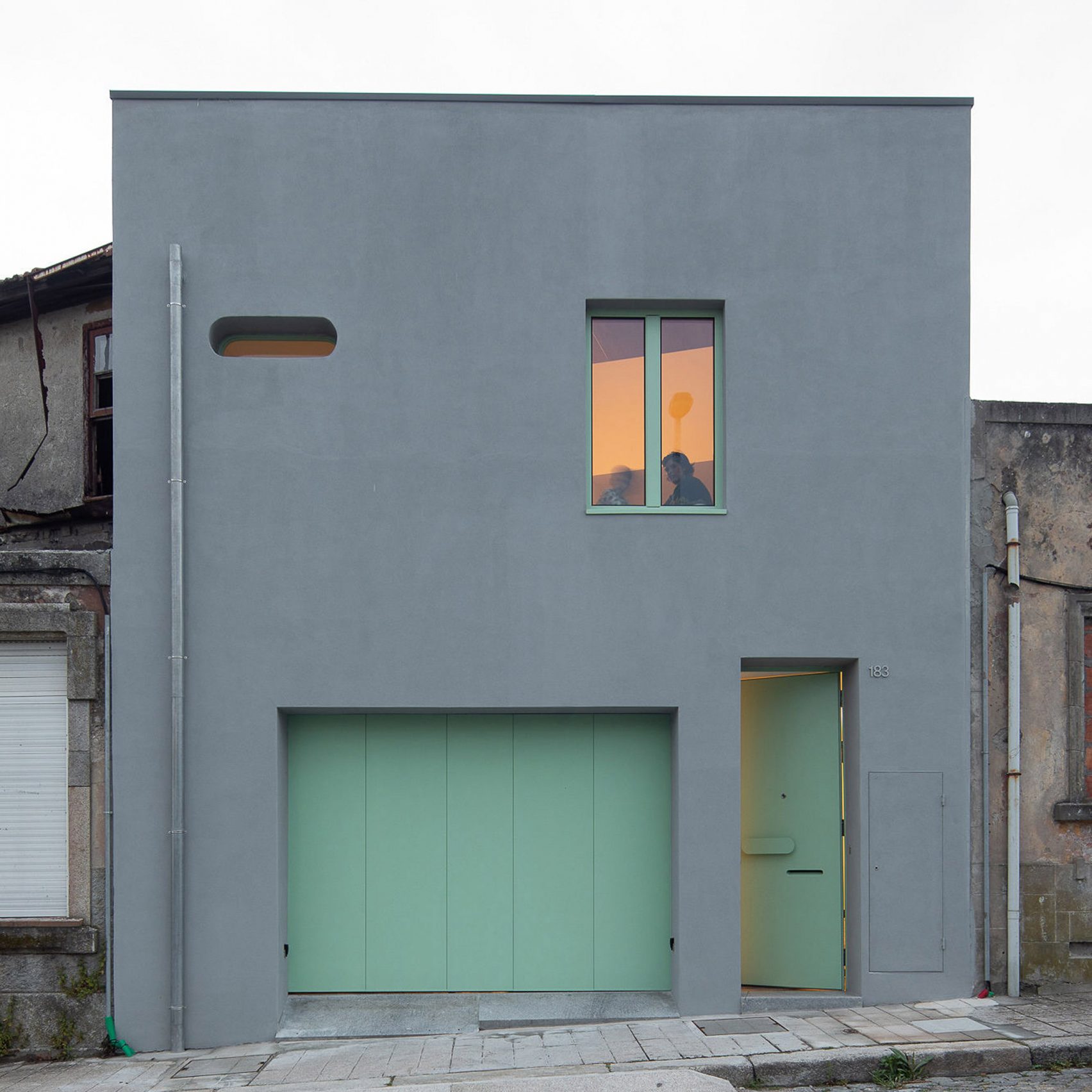 Local architecture studio Fahr 021.3 has renovated a home for a young family in Porto, Portugal, drawing inspiration from the social architecture projects seen in the city in the 1960s and 70s.

The studio transformed the three-storey building for a family with two kids that wanted to live close to the city centre, keeping very little of the original structure.

"It was a renovation with very little use of the pre-existing structure insofar as only the stone partition walls were used, forcing the reuse of materials that did not increase the loads on the walls or put their properties and/or characteristics at risk," Fahr 021.3 principal architect Filipa Frois Almeida told Dezeen.

The ground floor of the house contains a garage as well as the living room, dining room, kitchen and a small bathroom.

Three bedrooms and another bathroom are housed on the first floor, while an attic room functions as a multipurpose space.

The studio looked to two contrasting types of buildings for inspiration when it was designing the 250-square-metre house.

"The inspiration came from the combination of two factors, the informal and traditional house from the beginning of the twentieth century and the social architecture projects characteristic of the city of Porto in the 1960s and 70s," Frois Almeida said.

"Its formal simplicity and absence of ornament mainly valued the human, social and urban scale of the building."

Inside the house, Fahr 021.3 used wooden floorboards and wood panelling to contrast against clean white walls, and added pale turquoise detailing to liven up the rooms.

The shade was used in bedrooms and living room as well as the kitchen and the bathroom, connecting the separate spaces and adding a calm feel to the interior. In the living room, pastel-coloured furniture matches the turquoise hue.

Using colour in this way is common in the city, according to the architect.

"The open and fresh colours are somewhat common in small single-family houses in Porto as an element of distinction and personal appreciation," Frois Almeida explained. 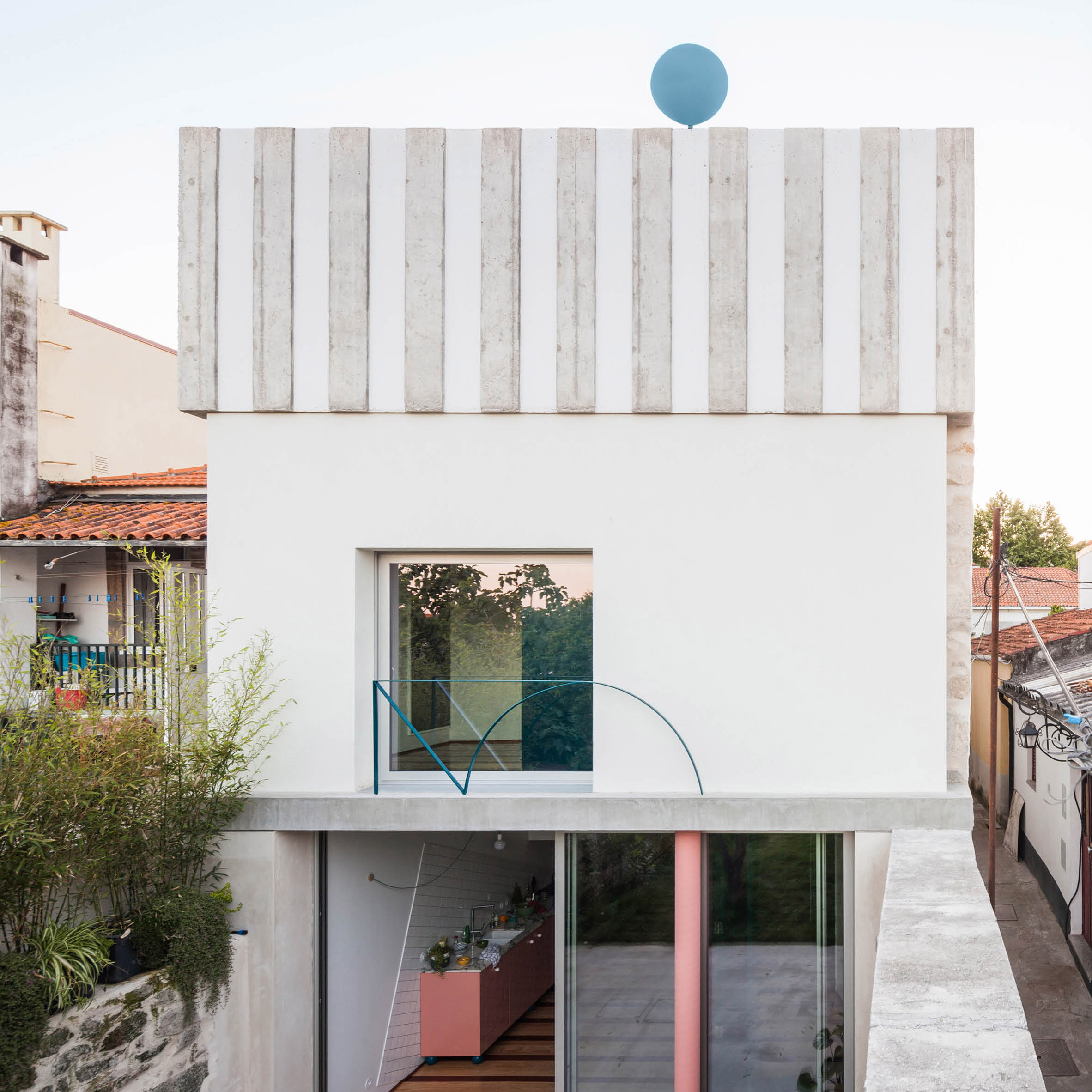 The turquoise hue was also used on the exterior of the house, where it contrasts against a grey facade.

A playful detail was added in the form of a bent-steel railing that functions as a barrier to the upper-storey balcony and adds another touch of colour to the house.

The turquoise details also help to give the house an identity.

"The use of colour allows for the affirmation of the distinctive identity of the building itself, as something that makes it stand out in the consolidating urban front," Frois Almeida said.

"It not only reveals this inside but also shares this intentionality with the neighbourhood and any passer-by."

As well as the pastel colour scheme, Fahr 021.3 added rounded shapes to the house to create a playful feel.

In the living room, a semi-circular cut-out opens up to a playspace underneath the stairs, while oblong shapes were used for small windows, cabinet door handles and even electrical sockets.

"'Nature hates straight lines', is the title of an exhibition by a Portuguese artist we are very fond of, Gabriela Albergaria," Frois Almeida said.

"The construction of a building is still a long way from that reality, imposing rules, standards and construction technologies that cannot be avoided or circumvented in their entirety, so these elements are like small forms of balance between straight lines and curves," she added.

The studio also added practical solutions to the interior, including a pegboard wall in the hallway on which the family can store bikes and hang bags.

Fellow Portuguese studio Fala Atelier also recently added candy-coloured accents to a house in Porto in its renovation of an abandoned 18th-century townhouse.

The photography is by José Campos.