We had placed an order in the beginning of November with a sub-seller through Amazon.  Not shipped or fullfilled by Amazon. I should have known better. The knobs were to come directly from the company. Ugh.

Then a second time they furnished us with a different tracking number via the post office this time....   and twice those tracking numbers showed that the items only had a label created... both times the box had not even left their address.  Either number didn't show any progress. They were not listed as even being processed within the UPS on the first box nor the US Postal Service on the 2nd.

It's like they created and printed up the labels but never shipped out the box. Finally after 3 weeks, and multiple messages back and forth, I gave them a a bad review on Amazon. Suddenly they sent me a message insisting the box was on it's way. Two days later we got tracking information about two different boxes: one coming from Kentucky and one from Las Vegas. Their company says the tracking was coming from California? But sure enough, here came the boxes. Three knobs came from Kentucky and two of them came from Las Vegas. I didn't care, at least we finally got them! 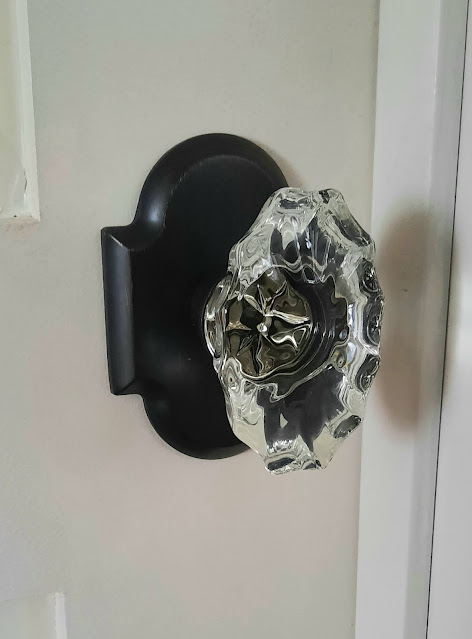 They were very well packed and seemed to be a very nice quality. They were heavy and well-made and everything was absolutely perfect. No damages incurred during shipping, thank goodness. I cannot imagine trying to deal with that company again trying to get a replacement.

Even though we were still feeling somewhat under the weather, Steve went right to work with adding one of the knobs sets to his new French doors. Had to do a little fine chiseling work around the latch plate. He used to install doors and locks and mechanisms all the time at the University, so this was no big deal. He just has to be precise and exact so the door will latch correctly.

"And there you have it", as he would say. The French doors now have a very nice latch and pretty knob set. We could try to order some kind of a dummy knob for the right-hand door. It also opens but is not a latching type door, but the company does not offer a dummy knob in this design. So we will just have the single door knob and that works well.  The other door has a latch hidden in the jamb, that locks it up into the transom to hold it secure.

I really liked how they looked. Last month we already bought the additional smaller knobs (from another company who shipped them out right away) to compliment all of the bi-fold closets and the cabinet doors in the bathroom. We bought enough of the bigger door knobs from this troublesome company to replace all of the interior door knobs in the house.

Soon he had them all replaced around the house, and I am very pleased with the results. Sometimes it's just these little things that add that extra touch to the design. It makes me smile.  We have ONE original old glass knob on ONE door in the house, the rest had all been replaced over the years with plain old average run-of-the-mill contractor grade door knobs during the rental period of the life of this house.  Now it was time to restore some things back to it's more original grace and style. To make it a home.
~~~~~~~~
Now on to the turkey part of my blog. Earlier this month, when turkeys first started going on sale, we managed to snag a 22 lb bird for only $0.39 a pound. That was less than $9.00 for a big turkey! It has been taking up a lot of room in our freezer. We decided that we would start thawing it out on Friday in the refrigerator, and cook it up by Sunday. Steve and I were mostly feeling better, just a lingering cough. Our older daughter with hubby and kids could come attend Sunday evening meal and watch the Packer game and stay for a turkey dinner. Our younger daughter and her family had opted to stay home, trying to avoid any contact with sick folks or illness, so we promised to bring them leftovers later.  She has an important job interview coming up on Wednesday, and didn't want to jinx anything by getting sick.  We understood that.
Sunday morning I started cooking a little of this and a little of that. We took our time, there was no rush rush rush.  It's not like it was a big huge party with a lot of people or anything. I made some of my famous calico beans and Steve worked on mashed potatoes. Pretty soon we did up the stuffing and the sweet potatoes, and there was a nice festive feeling in the air with the smell of turkey cooking in the house. Although we missed out on the big Pfundtner family gathering with Steve's family, it was so nice to do a little something at home.

Granddaughter Chelsea helped me in the kitchen, and we put together a nice little spread across the island. I like when the kids pitch in and help.  Plus they learn good kitchen skills for when they have a place of their own.

Steve took care of carving up the bird when it was done. It was absolutely huge! I think it's the biggest turkey I've ever cooked.  He only cut up one half of the bird and it was more than enough for the seven of us.

The grown-ups opted to fill their plates and go back down into the she shed to watch the Packer game on the big TV. I didn't mind. It wasn't like we were setting up a formal fancy dinner or anything. It was just mainly to get this bird cooked up and that we could all have some leftovers!

I decided to forgo the game for the third quarter and join the three grandkids up in the dining room --- along with three sassy begging dogs that were so excited about having turkey. Here I caught Chelsea sneaking some to their little white dog Biscuit. They both look guilty!

All three dogs soon figured out that Chelsea was the "easy mark" to get treats from.  Binney and behind her in the background is the dark black dog called Ewok. I suppose, after having to smell all that wonderful turkey cooking for all those hours, they deserve just a little bit of snacks.

After dinner, littlest Claire got out some colored pencils and paper and was busy doing some drawing and writing letters. I think she is practicing for writing letters to Santa. 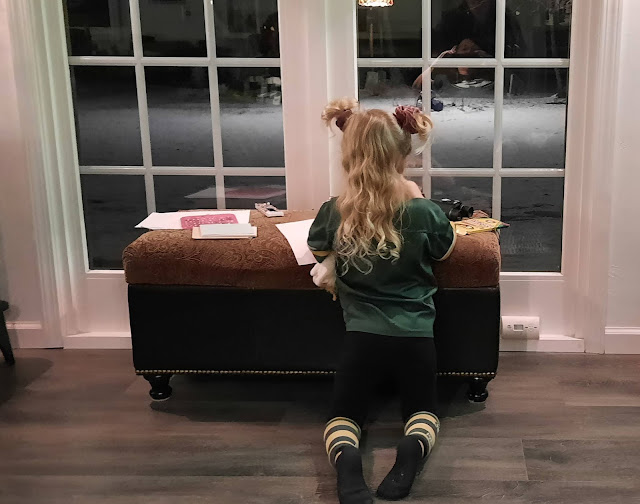 Clayton also had to have some colored pencils and was doing some intricate fill in coloring pages that he found on the internet. I was able to print them out for him so he could work on artistically filling them in. He also did a nice free hand portrait of a fish, with with great detail and coloring and shading. He has such a nice long attention span for a nine-year-old boy.  And now I proudly have some new artwork hanging on my fridge.

After an hour or so, when our dinner settled down, it was time to eat some pumpkin pie. I had baked up three pies earlier in the week, and sent two of them down to the Pfundtner Family gathering on Thanksgiving Day. This was the last pie I had hidden away in the fridge. I was very tempted to dig in and cut out a piece on Friday or Saturday. But no no no, I was good and I left the pie intact until Sunday.

The best part of the evening was that the Packers won the football game. It was rather touch-and-go for a while and we were happy that they pulled it off! Any win is a good win.

After the family went home, we filled up some containers with a lot of leftovers to bring out to the other daughter Heather's house. When we got there, dropping it off at the door, their sassy Corgi Radar decided he was going to hop in our back seat and go for a ride. He knew where that good turkey smelling food came from, and he wanted to go back there and get some. LOL  We had to take him out and he grumbled and humphed and complained all of the way into the house that he didn't get to go for a ride with Grandma and Grandpa.

So that is how we spent our Thanksgiving weekend. Being sick, finally feeling halfway better, then about three-quarters of the way better, and cooking up a meal. I spent the rest of Sunday evening picking everything off the carcass, it got out in the trash by Monday morning so it wasn't stinking up the garage all week
I'm so glad that we have some leftovers in the fridge and freezer. I love having warmed up leftover turkey white meat on cold buttered bread for sandwiches as lunch for the next few days. We took a lot of the little pieces and put them in a pot and simmered it up for soup.  We even managed to take the wishbone off the carcass, and I have it drying on the window sill by the kitchen sink.  My mom always did that for us kids too. Both Chelsea and Clayton were asking about it, so next time they come I will let them make a wish.
~~~~~~~~~
We were very pleasantly surprised on Tuesday morning to get a beautiful snowfall. They had only predicted about 2 inches, and we got probably a good six inches of softly falling crystal sparkly snow. 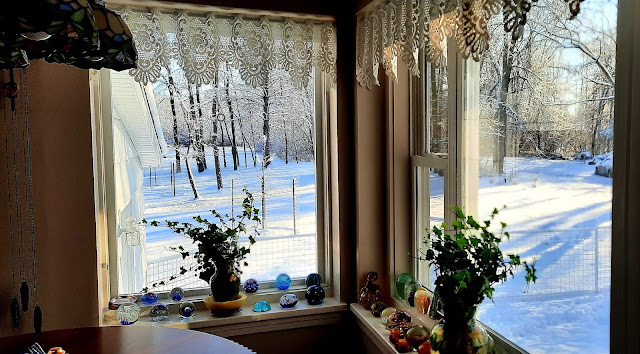 We woke up in the morning to a beautiful fairyland scene out of every window. The clear blue sky just made the snow even more intensely white.

There were little icicles dripping off the edge of the roof that were sparkling in the sun.  The first major snowfall of the year holds such beauty and serenity.  The outside sounds are now more muffled, and the whiteness of the landscape is so pleasant to the eyes after the browns and greys of earlier in the month. 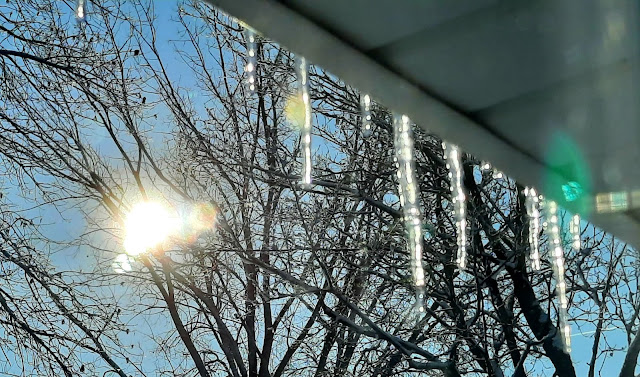 We even had little patterns where the snow was clinging to the wire cages we put around each of the new trees that we planted this past fall. Here is the Burr Oak Tree, stately claiming a spot in our backyard, surrounded by wire fencing. This tree is in memory of my mother and was a lovely thoughtful gift from our brother Pete and wife Cindy.

After a couple hours of sipping our coffee and looking out the windows at the beautiful snowfall, Steve decided it was time to fire up the snowblower and get it out to do it's work. The snow plow had gone through twice, piling it up at the end of the driveway. The temperatures had warmed up and the road was all slushy and wet because the snow was melting. If we don't get this stuff moved now while it's wet, later on at night it will freeze hard and we will have a solid lump of ice across the driveways for the rest of the winter.

I have more to tell about our next two "adventures", but I will wait until the next blog do that. This one's getting long enough.

Here is a hint: 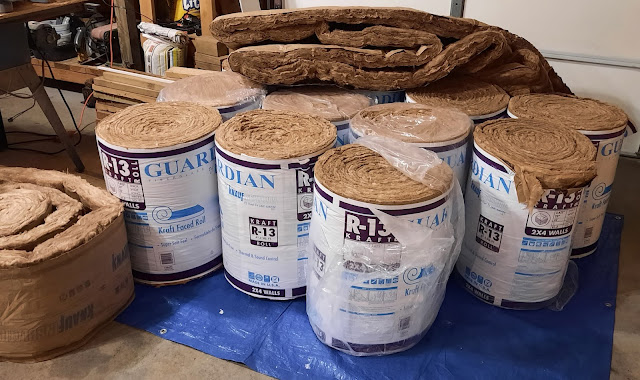 Wonder what we are up to next?