Manhattan Apartments That Peter Parker Could Actually Afford To Rent 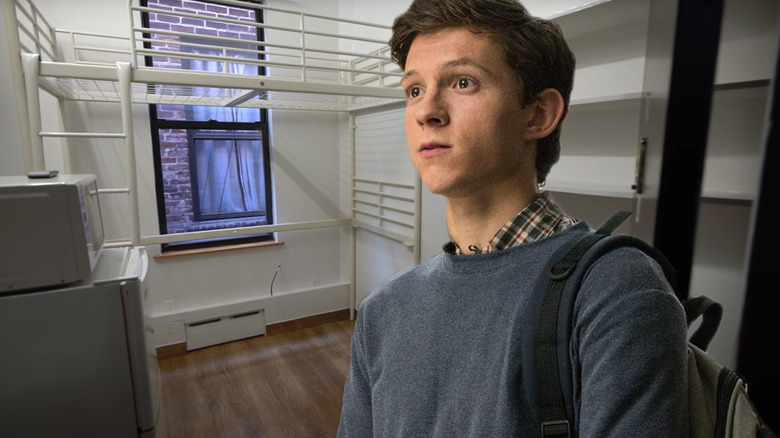 Warning: Spoilers ahead for "Spider-Man: No Way Home."

At the end of "Spider-Man: No Way Home," young Peter Parker needs to get his own apartment in Manhattan, and though the apartment shown on screen isn't the height of luxury, it's still pretty darn nice for his budget and location! Which got us thinking ... what kind of apartment could Peter Parker actually afford in Manhattan these days?

New York City has notoriously high rent rates that have only gotten less affordable since Sam Raimi's "Spider-Man" movies were released, and unlike Peter 2 and Peter 3, poor Peter 1 doesn't even have his GED yet. Tony Stark may have left him a pair of spy glasses and an army of drones, but he didn't leave him a handy wad of cash, and "The Falcon and the Winter Soldier" revealed that none of the Avengers get paid for saving the world. Now that Aunt May is sadly gone and none of Peter's former friends remember he exists, he's going to have to get a job. Maybe The Daily Bugle is looking for amateur photographers to take photos of Spider-Man ... but Peter would really have to be in a dire spot to go and work for the man who ruined his life.

Our initial budget for Spidey's pad was set at $1,000 per month USD. However it turns out you just can't find a place to live in Manhattan proper for less than that. The most affordable solution would be to find roommates (translation: rent a box room with a fold-down bed that doesn't fold all the way down because there's not enough room), but that would make concealing his superhero antics kind of tricky. Peter needs his own space.

So, in order to make it on his own in the big city he's going to have to hunt for his own food rather than going grocery shopping (just build a nice big web for catching pigeons, Pete), "borrow" the Wi-Fi from a neighboring coffee shop, and get a job where he earns a lot of tips (maybe something involving pizza delivery). With those extra measures, we pushed Spider-Man's hypothetical housing budget to $1,500 per month.

Here are seven places that Peter Parker could possibly live in Manhattan. One thing's for sure: it's a good thing he can sleep on the ceiling, because floor space is at a premium.

200 Square Feet To Call His Own 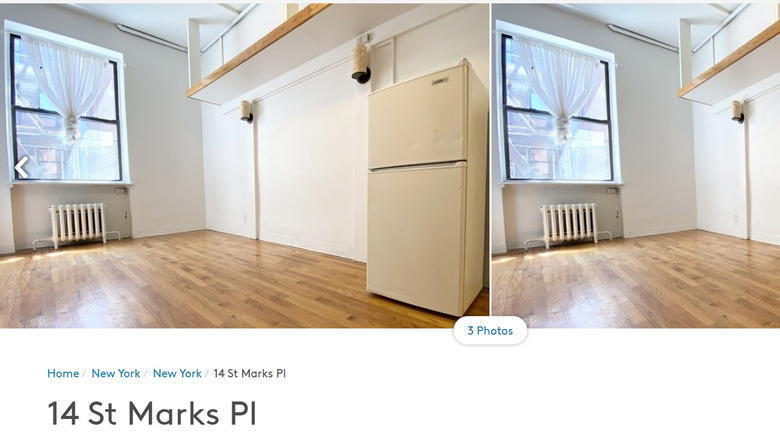 The first apartment I found was in the highly desirable St. Marks neighborhood. The 200 square foot pad comes with heat, cold water, hot water, and electricity included, which means Peter might be able to afford it at $1,200 per month. The apartment has its own full-sized refrigerator, somehow (there's no sign of a kitchen to go with the refrigerator, so he'd probably have to embrace the hotplate life), and a small shelving unit that Spidey could probably use as a bed if he really needed to. The apartment is just a few blocks from major Manhattan destinations including Greenwich Village, Washington Square Park, and Union Square, so the cost of this one is definitely based on its location.

To help you visualize just how small 200 square feet of living space is, know that the average one-car garage is about that size. The inside of a full-sized school bus is about 300 square feet, and a king size bed is about 42 square feet. I know Peter's a pretty little guy, but this apartment is tiny. Also, there's one rather unfortunate requirement in the listing that would disqualify him:

Must have 2 co-signers or guarantors e.g.: parents or aunts, uncles, sibling, relatives etc. who can co-sign.

The City That Never Sleeps (Because There's No Bed) 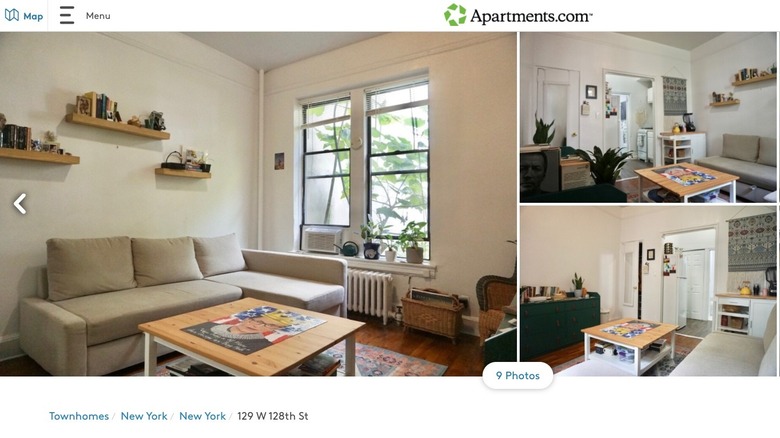 This is one of those deceptive apartment listings where you think, "Wow, that looks pretty nice!" until the thought occurs to you, "Hang on, where's the bed?" Since this is a studio apartment and there's no bed in any of the pictures, we have to assume that the current occupant is using the couch as a bed.

Peter Parker is a teenage boy and probably has low standards when it comes to his sleeping arrangements, but Peter 2 and Peter 3 would no doubt warn him that after a long day of swinging around the city, his back deserves a decent mattress. Sacrifice the couch, replace it with a single bed, and use some throw pillows to turn it into seating during the day, and this $1,450 per month townhouse unit could become a nice little home! (Hannah Shaw-Williams) 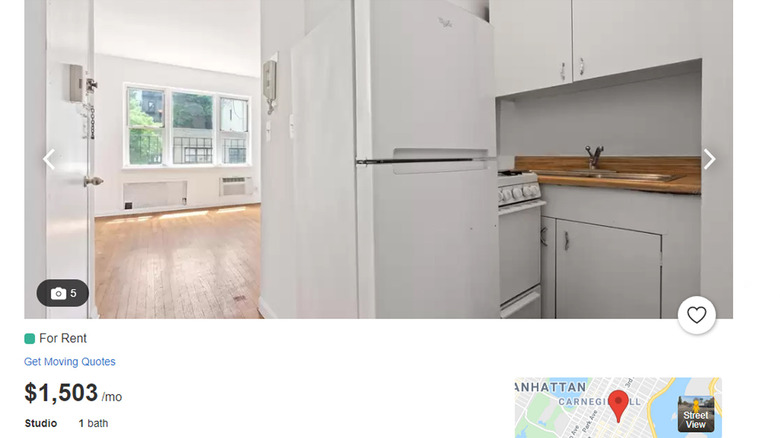 The next apartment I found is near the Carnegie Hill neighborhood, on the upper east side of the city. This one comes in at a hefty $1503 a month, putting it slightly over budget, but it's a little bigger at least. On the downside, the bathroom looks like a potential health hazard, and there's a cabinet door that cannot be opened because it's blocked by the stove. Most of the kitchen sink is blocked by the stove as well, but hey, at least this apartment has an oven!

For just over $1,500 a month, Peter Parker can afford a large room with a tiny bathroom and somewhat functional kitchen attached, and if he's lucky, he won't get tetanus from the bathroom fixtures. Since this one goes over his budget, I would have to assume that he'd need a roommate to afford this place, which makes the size of everything even more awkward. (Danielle Ryan)

A Little Further Out, But Look At That Toilet Seat! 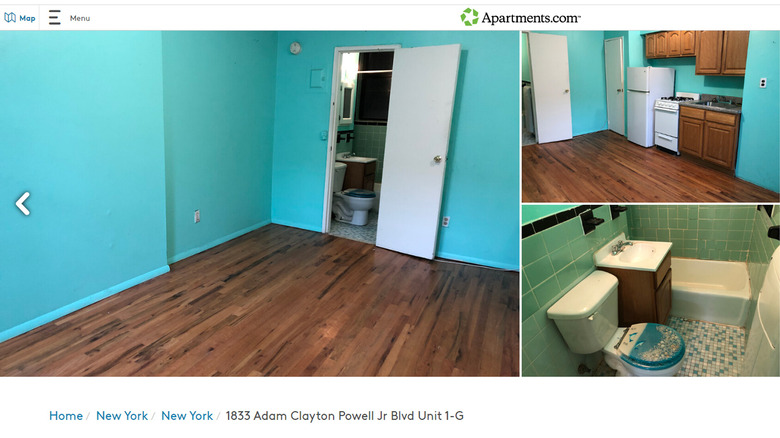 If Peter is willing to park himself a little further out, there's a fun teal apartment in central Harlem, two blocks from Central Park. The studio doesn't have a separate bedroom or kitchen, but the large single room is divided up rather nicely into a kitchen area with a full-sized fridge and stove(!) and a bit of cabinet space.

The real selling point for this unit, however, is the custom-made dolphin toilet seat, described in the listing as "one of a kind." While it's on the upper end of the budget at $1401 per month, a little extra cash each month for the luxury of putting your cheeks on a custom seat might be worth it. Besides, if Peter ever decides he wants to make his own green screen movies, he could just use this apartment with a little bit of tint adjusting! (Danielle Ryan) 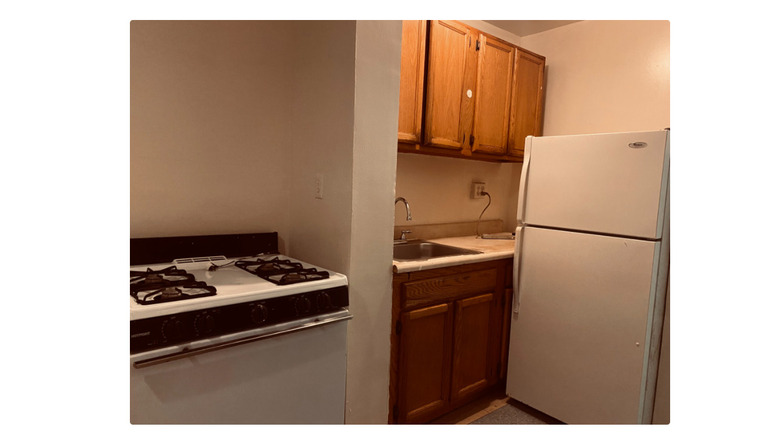 In a competitive housing market, having cupboard doors that open is a luxury. Peter's flexibility and agility will come in handy when he needs to access the top unit in this kitchen, since he could probably get those doors partway open and wriggle his hand in there. But he's not getting into those bottom cabinets without moving the fridge every single time. I'm also a bit worried about that extension lead being so close to the sink.

This "1 1/2 bedroom" apartment will push Spider-Man to the edge of his budget at $1,500 per month, but at least heating and hot water are included, and at 700 square feet it's practically palatial. This is also in central Harlem, so he'd have a bit of a commute to any downtown locations. Fortunately, Peter has a neat way of beating New York traffic. (Hannah Shaw-Williams) 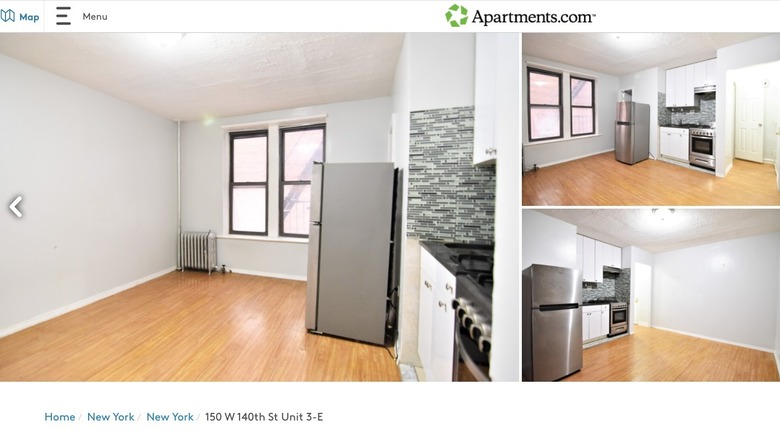 This is one of those studio apartments where Peter's bed is going to end up being placed uncomfortably close to the stove no matter where he puts it, but on the bright side, look at those shiny floors! There's no better way to embrace newfound freedom than to do the Tom Cruise sock slide from "Risky Business," and that floor is so shiny that you could probably slide all the way across the apartment without stopping.

This studio is also pet-friendly, which is handy in case Spider-Ham drops by, and at $1,395 per month it's practically affordable! We're a long way uptown again, on West 140th Street, but the listing boasts "good proximity to laundromats, grocery stores, delis, and more!" (Hannah Shaw-Williams)

A Room, No View 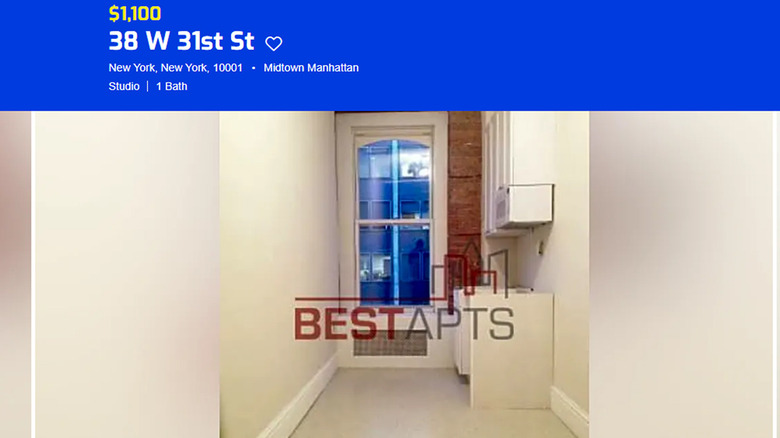 And last but ... well, actually it is least, there's this apartment, which is really just a room with a washer and dryer in it. For $1,100 a month, Peter could rent this room, which looks like it might fit a double bed if he shoved it in there sideways and webbed himself to it every night. The room is for students only and there's a shared bathroom, which would work alright for Peter, but that's $1,100 a month for a tiny room and nothing else. No kitchen, a bathroom you have to share with a bunch of other nerds, and one teeny room. Maybe he should see if there's any available closets in the Avengers compound — they're probably bigger. (Danielle Ryan)

Read this next: Spider-Man Movies Ranked From Worst To Best

The post Manhattan Apartments That Peter Parker Could Actually Afford To Rent appeared first on /Film.