This very picture heavy post was inspired by an evening of looking at our family photo albums a few weeks ago. We had a lovely time looking at old photos and we realized that we wished we had taken more pictures of homes/rooms that we had lived in through the years. It was neat to see how things had been laid out and how much things had changed through the years. Our last home and current home were both fixer uppers and experienced many changes while we lived in them. I do turn our blog into blog books and we use those as photo albums as well as having traditional photo albums.

I did end up sticking to public spaces in our home with the exception of our bedroom. The kids weren't sure they wanted their bedrooms in the tour and I respect my young adults feelings. The majority of the contents of our home is thrifted/gifted or inherited. I love to hunt down special finds and pay pennies on the dollar for them. Also, we have been on a journey to drastically reduce our belongings since 2019. I do believe we have currently reduced them by about 50%. We maintain "a one thing in one thing out" rule at all times in addition to routine decluttering. This has created a much easier home to maintain. There is still plenty of reducing to go, but I can manage our home so much better now and we are all much happier and calmer living in it.

I spent a week in September painting the siding, doors and shutters on the front of the house. The shutters were a very faded and sad blackish grey before. The two "front" doors are brand new and a wonderful addition to the home. I was going for a little bit darker sage green, but this lighter cheerful green is growing on us more and more every day. I still need to paint the floors of the two porches, but that will probably have to wait for the spring. Our house is funny and has two front door entrances. However, one leads to what we use as a bedroom for our oldest son. I think it must have been an in home office at one time with a clients entrance. The front door entrance that we use is on the little yellow porch and leads into our library room. 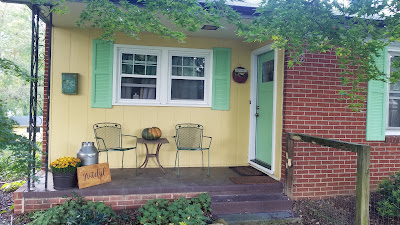 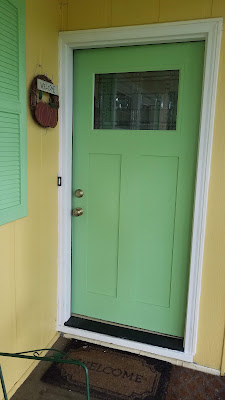 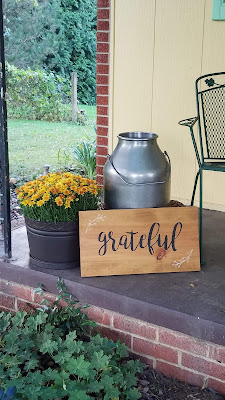 Our library is a work in progress right now. We ended up moving our sofa and loveseat downstairs to the family room this summer so that Rebekah could have a larger room to dance in for a virtual summer intensive. We felt blessed to have a traveling dance floor that could be picked up from it's normal room and relayed in this room with in an hour of effort. When the intensive was over, we moved the floor back to her usual dance space, but decided that we really liked the tv and sofas downstairs. That left us with a very empty library for the summer. I have slowly found things at yard sales, thrift stores and moved furniture around to make a new space. The goal for the library is to have three comfortable chairs in a nice arrangement on the carpet. Then to have a chaise lounge or settee on the wall near the curio cabinet that can be moved around for more seating when needed or can be a separate for reading. Over all, we want small pieces of furniture that can be easily moved around to make the room multi functional. Some of the pieces in the room right now are place holders while I look for something more appropriate. 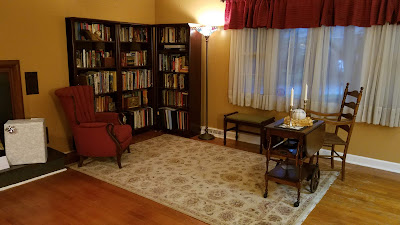 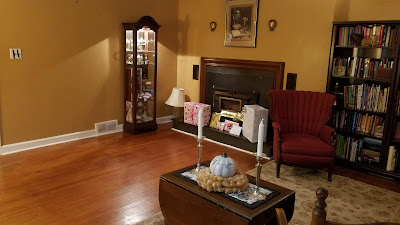 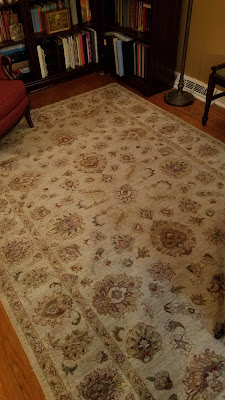 The rug was an extremely lucky find a few weeks ago. It is a hand knotted rug in very good condition (perhaps Persian). One of my friends is a rug collector and did a bit of research for me. Her guess was that it was worth new upwards of $4,000 and I paid $40 for it. That is the kind of deals I like.
The fireplace below still doesn't work. The chimney still needs a new crown and it probably needs a new liner. It has been on the dream list for some time now. 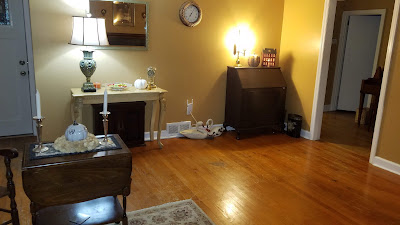 Our home was added on to two times. It was originally a one bedroom home and this hallway was part of the living room of the original house. The wall that the piano is on wouldn't have been their creating a larger living space. On this side of the house they added on the front two rooms (library and master bedroom) years later. The boy's bathroom which is the door just beyond the arch would have been an open eat in kitchen. The doorway leading to the dining/kitchen would have been the end of the original house and it's renovation came in the early 1970's. 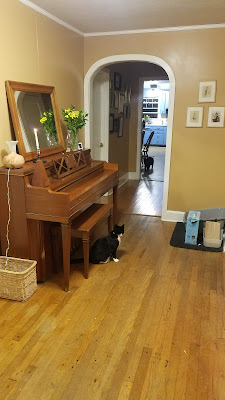 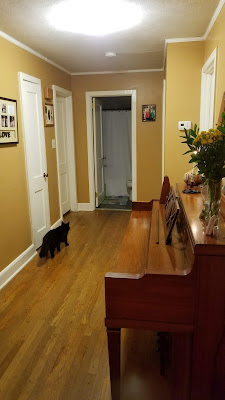 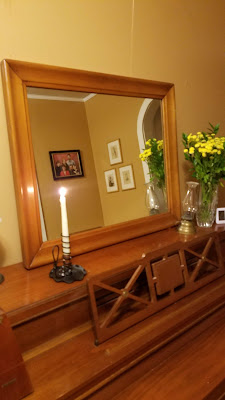 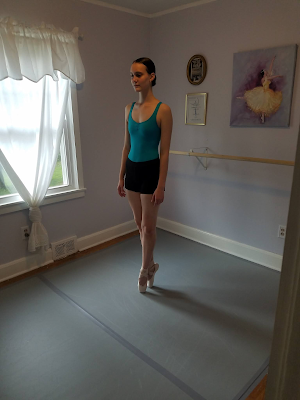 This is currently Rebekah's workout/dance space. We call this the room of requirement because it has been many things in the past few years. It was our oldest daughter's bedroom when she lived here, then it was an office, then a guest bedroom and now a dance space...and it was the original living room when this was a one bedroom house in the early 1950's.
We consider our bedroom the master bedroom because it has a wall of closets on one wall. However, there are two potential master bedrooms in this house and our son Elijah's room is actually the largest in floor space. Neither has a bathroom.
We have made many changes in our bedroom this summer. The curtains were a steal at the thrift store for sixteen dollars. The sleigh bed was purchased from a friend who was moving across country. She threw in a dresser which ended up in our son's room and meant that we could have our men's dresser back to complete our his and her set of dressers. The dressers where handed down from my grandparents to my parents and then to us. The mirror for the woman's dresser is on the piano. I love having family heirlooms. The quilt was our most recent find from the thrift store for just a few dollars. I love it. 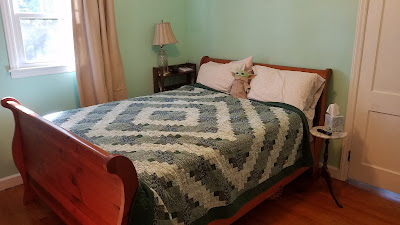 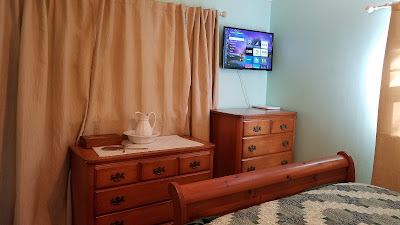 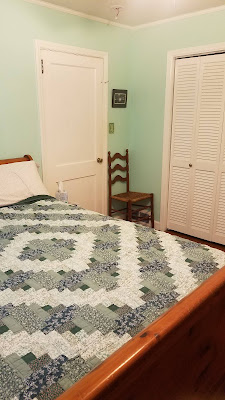 Moving on to the other end of the house. We have the largest and last major addition to the house which took place in the 1970's. It holds two bedrooms, the dining room, kitchen, and downstairs family room. I feel like I have shown pictures of our kitchen and dining room loads of times. We spend a lot of time in these two rooms. So here is a quick look. 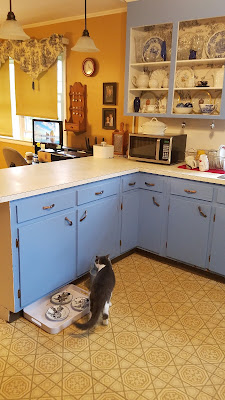 The downstairs family room is working so much better for us. We enter from the carport into this room and giving it a true purpose has helped cut down dramatically on the drop everything at the back door issue. I would still like to make lots of changes to this room. The biggest change would be to get the walls all to match. Right now we have the exterior cedar shake from when the basement wall was the outside of the house, cinder block on two walls and the final wall with paneling and dry wall. Not to mention the fake brick wall that used to be behind the wood stove that we no longer have. It is a mess of textures. 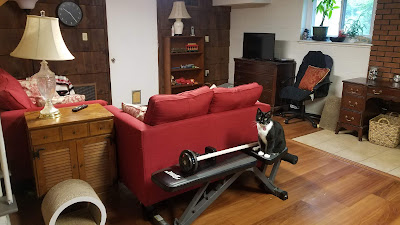 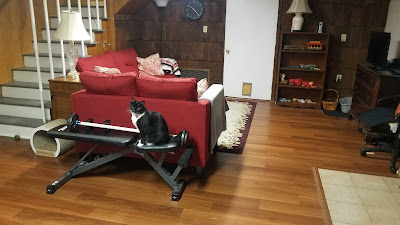 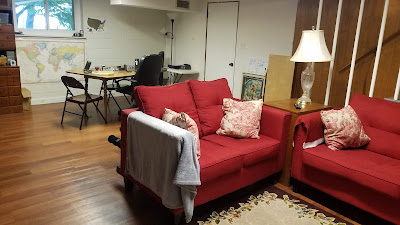 So, that is the public areas of our home. I may show the behind the scenes areas of our home in the coming months. The basement/laundry room is huge and really needs to be tackled. The garage also needs tackling. This house is 3,400 square feet if you include the basement and family room. They are not counted on our taxes because the lower level has to short a ceilings to be counted as living space. This house had definitely felt to big to me at times. It is a lot to maintain, especially because it was a terrible wreck when we bought it as a foreclosure. Also, I was raised and lived in less then 1200 square feet for most of my life, so this is really big to me. However, by reducing our belongings and embracing empty space, we are finding it so much easier to keep up.